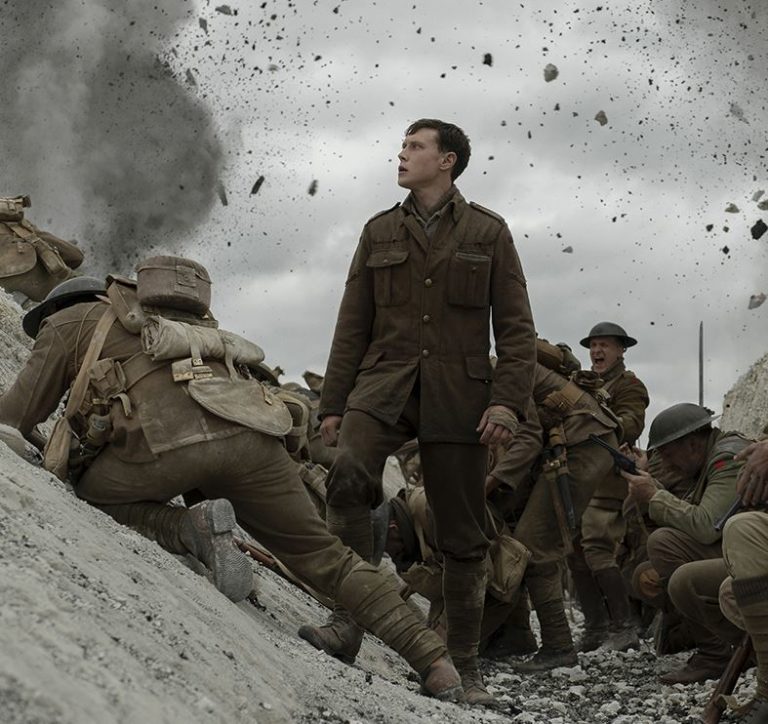 Yes, 1917 is brutal – there are scant minutes when it is not. But it is not that ‘senseless cringe brutal’ for the sake of it. It is a desperate struggle for life-over-death and the dire consequences of such.

World War One is the battleground for 1917. Two British soldiers – barely old enough to shave – are ordered to deliver a message to the front to call off an attack or 1600 British soldiers could die. The only problem – it is a long journey on foot through heavily occupied German-held territory. And they are racing against time.

Now, getting to the front is the story, and it is a horrific struggle. It starts with Lance Corporal Schofield (George MacKay) and Lance Corporal Blake (Dean-Charles Chapman) desperately wending their way through the muddy, human detritus filled trenches. There is nothing that can prepare you for the stoic desperation of the British soldiers and the signs everywhere that read, “Keep your head down”.

Then the for the pair, it is the point of no return – up-and-over into the no-man’s land where the British and German forces take potshots at anything that moves.

I could regale you with the story of reaching the now deserted German trenches in one piece. Or of the engineering marvel of German tunnels – and the inevitable booby trap. Let’s just say that barely a quarter of the way of their journey you viscerally feel every challenge the pair faces. And you begin to understand their dedication to saving 1600 British soldiers overrides any fears or insecurities humans usually have.

1917 is unique. It is brilliant, vicariously captivating and horrifying at man’s inhumanity to man – all at the same time.

Would I watch it with the kids? No, its MA15+, but my wife and I enjoyed, well that is the wrong word, were captivated by it and at 110 minutes it is not too long.

I am not a film critic, but I can see why it rated so well in its short pre-COVID release at cinemas. IMDb (Amazon-owned) gave it 8.3/10, Rotten Tomatoes (that I nearly always disagree with), 89% and independent viewer reviews gave it 91%.

His style – he focuses on character development so that you begin to see things through their eyes. You see the action from their perspective. In the end, you feel the palpable relief (and we won’t spoil that).

OK, yes, this is the perfect setup to get the most out of the 4K Ultra Blu-ray disc. But the package also comes with a 1080p, Dolby Atmos version, both with extended features.

At 4K details are amazing (filmed in 4.5K). You can see every hair on their head, real colours – it is as if you are there. Shown on a 4K OLED, you see inky, deep blacks yet Dolby Vision is there to bring out subtle nuances that don’t exist in HDR/10/10+.

The Samsung Dolby Atmos 7.1.4 soundbar immerses you in the movie. But this is not a movie that relies on psychoacoustic trickery (bullets whizzing overhead or incoming mortars). It is more about the atmosphere, emotion, urgency and chaos. Yes, even TV sound will do it justice, but you don’t know what you are missing!

But it also looks great on 4K ULED, LED/LCD and even 1080p screens – although the latter only needs the DVD version. The 4K Ultra version supports HDR, HDR10 and HDR10+ rendering as well as Dolby Vision.

Prices and links are from  JB Hi-Fi

The combo packs have extra features

Sam Mendes and Roger Deakins explain what is meant by the ‘one-shot’ method of filming (think back to the series 24 that showed 24 contiguous hours!). Allied Forces explains how the war-torn landscapes are created – very interesting.

It is compelling rather than enjoyable. The plot is immersive – you are there. The character development is profound yet subtle, and you feel for the poor runners.

It is not a horror movie per se. The horrors of trench warfare in World War 1 were bad enough – but it succeeds in making those horrors so much more understandable.

Our review format is suited to product rather than movies so take it as read that it is 5-out-of-5.

Features
Value for money
Performance
Ease of Use
Design
Reader Rating0 Votes
Immersive, compelling
Brings the horrors of WW1 to life through teh actors eyes
Amaxing 4K Dolby Vision and Atmos experience
While 1080p/TV sound will give you a gret experiecne - this is one that you wantt o see on the big screen
5