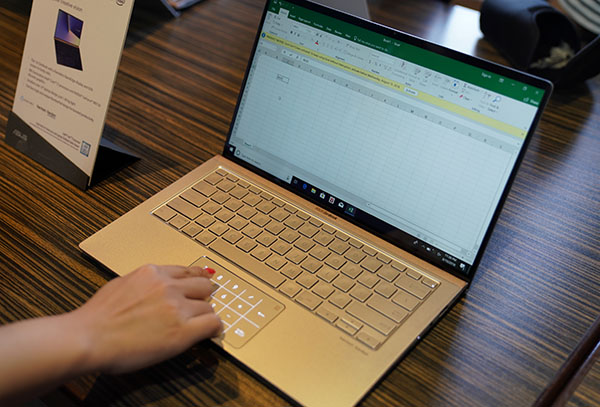 You’d think that they’d have run out of innovations for computer notebooks. But not ASUS. All 2018 ASUS ZenBook models to be released in Australia now have a numeric keypad. For some, it’s in a very unusual place.

The drive to smaller notebooks is welcome, but it has come at a cost. The new 2018 ASUS ZenBook aims to eliminate that cost.

The cost was the loss of the numeric keypad. For many years a kind of fake, diagonal keypad was included as a secondary function of the main keyboard, but it was always hard to use. Numbers people missed the real thing and would often go for a 15-inch notebook, just to make sure they had the numbers literally to hand.

The 2018 range of Asus ZenBook models now has the numeric keypad incorporated into the touchpad. We wrote about the new Asus ZenBook Pro here with its potentially game-changing touchpad display. The keypad is a similar sort of concept. Buried underneath several intermediate layers is a cutout with the numbers and dividing lines etched in. A LED display panel underneath that illuminates the numbers. The result is a bright numeric keypad, also with enter, backspace, decimal and four arithmetic function keys.

In the top right corner is a small switch to flip the keyboard on or off. This requires a little pressure, so it’s unlikely that one will accidentally switch it off. When it is off, the numbers disappear completely. Not even a ghostly reminder remains. When the keyboard is in operation, sliding one’s finger across its surface moves the on-screen arrow in the usual way. I did notice a small, but perceptible, delay as the function was switched. That said, I laid my hands on these new Asus ZenBook computers in mid-August, so they have no doubt been tweaked and improved since then, and more so by the time of release.

In use, the numeric keypad will probably not allow data entry quite as fast as a gun bookkeeper can manage with a physical numeric keypad. The keys don’t have any tactile feedback, of course, and there are no physical borders between keys. Nonetheless, within seconds I could key numbers into a spreadsheet much faster than I could with the numbers across the top of the keyboard.

The 2018 ASUS Zenbook range consists of five models, not counting the ZenBook S and ZenBook Pro, both released earlier this year. As we’ll see, only three of them will be coming to Australia.

There are three traditional notebook versions with 13-inch (UX333), 14-inch (UX433) and 15-inch (US533) screens. These have a clamshell design and no touchscreen. ASUS is using what it calls a “NanoEdge” display. That means a very thin bezel on all four sides. There’s a 95% screen to body ratio.

So where to put the webcam if there’s not much space on the top bezel? ASUS has redesigned this into a thin, four-lens unit so that it can remain at the top where it belongs. And where, according to ASUS’ market research, 79% of people think it belongs. It supports 3D and infrared and consequently works with Windows Hello.

There are also two convertible models with 13-inch (UX362)and 15-inch screens (US562). These are tagged ASUS Zenbook Flip, and of course have touchscreens, but still feature the NanoEdge display.

The 15-inch models don’t have the NumberPad for the simple reason they have a physical one. We won’t be seeing either 15-inch model in Australia. And they ought to be tough. They’ve been tested to MIL-STD 810G standards for enduring vibration, altitude, temperature (up to 71 degrees C while stored, 48 degrees C while operating), humidity and dropping.

All the 2018 ASUS ZenBook models use the very, very latest in Intel processors: the 8th generation Core series, tagged “Whiskey Lake”. As I originally wrote this in mid-August (but you can’t see it until now, thanks to a non-disclosure agreement), this range of processors was still unannounced. ASUS says that they offer up to 30% more processing power than the 7th Gen they’re replacing. The GadgetGuy take on the 8th Gen is here. One of the computers I played with was running a Core i7-8565U at 1.8GHz and 16GB of RAM. Storage is up to 1TB of PCIe solid state drive, with a read speed of up to 3.2GB/s.

ASUS says that the new models have the world’s fastest notebook/convertible Wi-Fi, with dual-band 802.11ac 2×2 MIMO Wi-Fi running at up to 1,734Mbps.

There’s a quiet fan mode, which clocks the computer down when you’re not doing industrial-level processing. That brings the sound level from 35dB SPL down to 21dB SPL. ASUS puts the life of the 50Wh battery at “up to 14 hours”.

They come with actual graphics cards: NVMX150 or GTX 1050. The keys are slightly sculpted in to improve the typing experience. There are USB Type-C Gen 2, USB 3.1 Gen 2, and USB 2.0 ports, plus a MicroSD card slot and HDMI out.

Thomas Bartlett attended the launch of the 2018 ASUS ZenBook range in Taipei as a guest of ASUS.