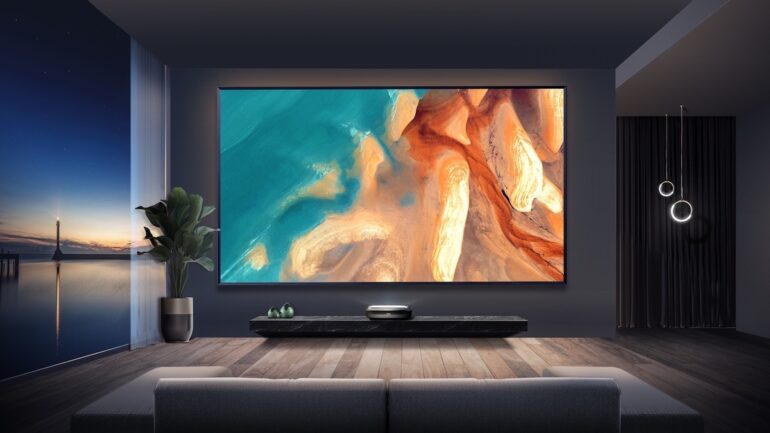 Hisense’s Laser range covers everything from single-laser short-throw projection up to these premium tri-laser models. The TriChroma Laser Cinema uses separate red, green, and blue lasers to generate over one billion colours, and cover 107% of the BT.2020 colour space. This is ultra-short-throw projected onto the included screen, at 3000 lumens of brightness.

Naturally the TriChroma Cinema 120L9G is a 4K display, running at 60Hz. And since the screen is nearly four times the size of a 65-inch TV, the image really fills your entire field of view.

Hisense offers two kinds of screen with these devices. The ALR Daylight screen comes pre-assembled and looks like a gigantic TV, but its ambient light rejection surface coating means it can be used in bright rooms, even in daylight. For dedicated home cinema rooms, the ALR Cinema Screen is even better at colour reproduction and has a 150-degree viewing angle. It does need some user assembly, however.

As well as amazing image quality and brightness projected onto a massive screen, the Hisense TriChroma Laser Cinema also supports Dolby Atmos for immersive sound. The console (that is, the projector part) also comes packed with Android TV for easy navigation of all your favourite streaming services, and it works with Google Voice Assistant too.

The TriChroma Cinema 120L9G will be available in major retailers across Australia from April 2022. Pricing is to be advised.