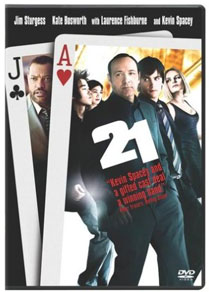 If you’re going to make a film populated with greedy, smug people revolving around a base and ugly central premise of greed, you better have something else to take the bitter taste out of viewers’ mouths. A brilliant, witty script, perhaps, or explosive, bewildering plot turns that just leave everyone open-mouthed and forgetful.

Sadly, 21 has none such compensations and instead turns out a sporadically enjoyable performance from Spacey in merciless bastard mode lording it up over a self-satisfied bunch of MIT kids who, utterly predictably, get ‘done over, guvnor’ by their mentor.

Waiting to see not so much ‘if’ Spacey’s cocksure character gets his just desserts, but ‘when and how’, the answer isn’t earth-shatteringly clever. This is a missed opportunity, given that the entire film continually attempts to dazzle us with just how smart its characters are, but it’s still satisfying to witness.

Ultimately, though, 21 is not as intelligent as it pretends to be, washing up inste[ad as a slick, by-the-numbers drama, completely forgotten by the time the credits start to roll.