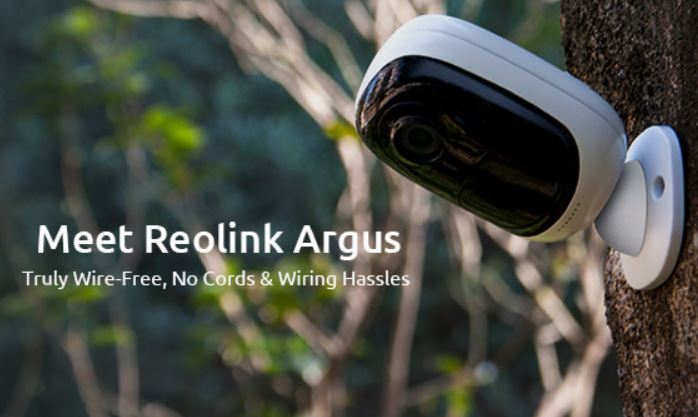 It offers complete flexibility as it has a micro-SD slot to record to (card not supplied) and 4 x CR123A batteries (non-rechargeable supplied) provide six months standby and around 14 hours daylight and 7 hours night vision record time.

Reolink Argus is unique in that it includes so much in a small package and does not rely on often expensive cloud-based recording storage.

It comes with a magnetic mount that enables it to be a desktop camera, placed in unusual locations or stalk style ¼” mount for more permanent fixing.
While both mounts are useful neither is vandal proof – it is all too easy to separate the camera from the mounts. Although the thief would be filmed in the act the microSD card would be gone as well.

It runs Wi-Fi N, 2.4GHz and I tried it successfully at 60 metres from the router so it could be at the front gate.

Prise off the back with the special tool, insert four CR 123A batteries, install the Reolink App (iOS or Android), and scan the barcode on the camera. The app then generates a QR code on the phone to complete the Wi-Fi link, and the camera scans this. There is voice guidance as well. One of the simplest setups ever!

Battery life is good for standby – claimed up to six months. In my testing placed in a low traffic location where the motion detection is infrequently triggered expect around four months before recharging.

Reolink claim 840 minutes or 14 hours daylight recording or live view and seven hours night recording. In the test period it was not possible to verify this, but over a week when placed at the front door it used about 1.5 hours of battery.

You can also reduce the recording definition to 720p at 5 fps instead if 1080p at 15 fps if you want to extend battery life. It also reduces bitrate from 1536 to 160 kbps if Wi-Fi signals are weak or you have a limited data allowance.

Reolink’s claims appear reasonable, and the app has a battery meter to let you know when to recharge.

The default setting for motion detection is up to 6 metres. The app allows you to select 4 or 9 metres as well – the latter will drain more battery and lead to more “false alarms.”

Although it was relatively well behaved, I did two things. First, reduce the sensitivity to 4 metres and second reduce the “coverage” by angling the lens to a more defined area (there are no user-definable zones). The PIR detection angle is quite wide at 130° x 70°.

If you get such alarms look at the environment – is there a mirror in the PIR range, are there bright lights turning on or off etc.

You can set up an email alert as well as emitting a short 70dB siren noise. That latter is enough to alert someone that they have been recorded but can be a tad annoying if left on inside the house.

1080p at 15fps – good clarity in ‘clear’ mode but colours are muted. The image is grainy in low light. It certainly is good enough to identify a person’s face.

720p at 5 fps – not really recommended but it does show a clear image.

Infrared is grainy but effective with sufficient definition to see a person’s face.

Reolink claim the typical use is to identify “events,” e.g. people knocking at the front door etc., and the image quality is great for that.

Record duration is six seconds per event – that can be a bit short and is not currently user adjustable.

Comprehensive, easy to use and allow complete customisation. For iOS and Android.

It is designed for standalone operation although you can set up and link several to the app. As an IP65 weatherproof device it operates from -10-55°C – from snow to meltdown.

Australian’s can get it on Amazon, Catch of the Day or from independent security companies that have seen just where this fits into home security. For availability search “Reolink Argus Australia”.

• Charger not supplied adds another $50+, and four rechargeable batteries adds another $55
• No microSD card not supplied – 64GB adds another $40
• Very easy to remove from either mount – not vandal proof and if stolen the micro-SD goes with it.
• Need to work on eliminating false alarms
• App needs more video indexing capability
• Not a ‘smart home’ hub connected device

It is idea to monitor the front door or other locations like a backyard. It is wire-free, well-made and a reasonable price at US$99.

It gets Gadget Guy’s recommendation of a DIY entry-point security solution.

As this is an online purchase, expect to pay around A$150 plus freight.

Special offer for this wire-free security camera is US$79.99, 20% off (December 20th to 26th) on the Reolink website https://reolink.com/product/argus/