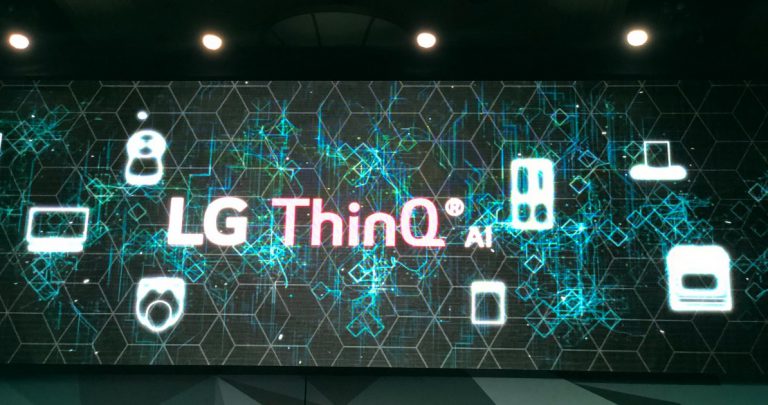 LG has revealed its latest products and direction at its press conference at CES 2018 in Las Vegas. In line with the big tech trends for this year, LG is focusing on adding artificially intelligent features and control to its new range of ‘ThinQ’ enabled products.

This involves the development of LG’s own ‘Deep ThinkQ’ AI engine, as well as integrating Google Assistant for voice control.

The idea behind adding AI to smart appliances, TVs, air purifiers and more is that you’ll be able to interact with them with Google Assistant enabled smart speakers around your home, and your devices can learn from how you interact with them to improve how they serve you.

Some devices will also be able to communicate with each other, such as the ThinQ enabled washing machine letting the dryer know what the best drying cycle settings should be.

On the television front, LG announced its ‘AI OLED TV with ThinQ’, which adds voice control via Google Assistant. With this setup, you can speak to your TV and ask it to perform a variety of functions such as searching for movies with a specific actor, title or genre, playing your photos, setting the TV to turn off after the show you are watching has finished and more.

Visually, LG’s 2018 OLEDs gain improvements in colour and clarity, as well as 120 frames per second for silky smooth video playback.

LG’s LED-based Nano Cell TVs also see improvements to their viewing angles, where 99 percent of the colour can be seen from a 60-degree angle.

LG is also committed to its Robots in 2018 and demonstrated its cute little CLOi personal assistant. CLOi features a swivelling body and ‘face’ and you can interact with it and issue voice commands for finding out information or controlling your ThinQ devices around the home. Unfortunately, CLOi didn’t want to participate in the live demo, so it was difficult to see exactly how she works.

Otherwise, LG also showcased its server robot and porter, both of which would be used in hotels to help guests, as well as a shopping cart robot that follows you around a shop and can barcode scan your items for an easy check-out.

We’ll be looking at LG’s products in greater detail tomorrow at CES when the LG stand opens, so watch this space.