A striking upright cooker from Falcon 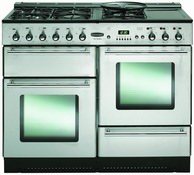 The Toledo includes two electric ovens, a triple ring wok burner, a wok cradle, a sit-on non-stick griddle plate and a separate grill compartment. The Toledo is available in 110cm or 90cm configurations, finished in silver enamel which creates the sleek look of steel without the need to wipe away fingerprints and smears. The 90cm, trimmer version of the Toledo offers the two-oven configuration including a tall, electric fan forced oven and a separate grill compartment. Many of the features included in the 110cm Toledo are offered as standard on the Toledo 90, such as a wok cradle and a sit-on non-stick griddle plate.