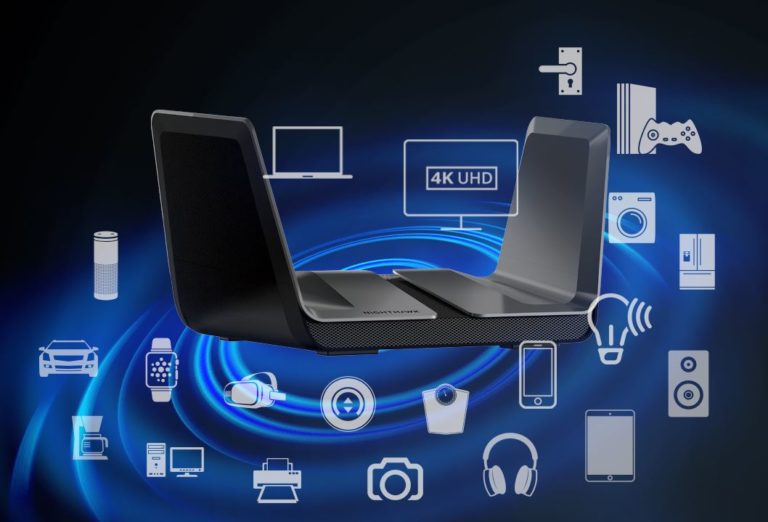 Wi-Fi 6 or AX is here – I have a NETGEAR Nighthawk AX8 (AX6000), eight-stream router in my hands now and I am aching to see what difference it makes.

Wi-Fi 6 or AX is the next standard after Wi-Fi AC and the aborted Wi-Fi AD. I mention AD (WiGig) because it attempted to get over all the AC issues but in doing so headed off on a non-backwards compatible road requiring new client devices to make use of it.

When Wi-Fi 5 AC came out in late 2013 pimply-faced sales people drank the Kool-Aid and made promises of performance and range that simply were not true. A badly designed AC network is no better than a badly designed Wi-fi 6 AX network or even a Wi-Fi 4 G network.

What they forgot is that in practice brick walls, concrete floors, Colourbond roofs, windows, furniture, people and much more all affect the signal. Wi-Fi 2.4Ghz can run up to 46/92 metres indoor/outdoor and Wi-Fi 5Ghz up to 15/30 metres line-of-sight. In practice cut that in half!

We will also see Wi-Fi 6 client (device) chipsets from many companies and speeds achieved will depend on the number of 2.4/5GHz antenna and streams

One last thing before we get into the jargon

But before you rip out and buy (and our AX6000 review is still a couple of weeks away), I wanted to try to dumb down what Wi-Fi 6 is and what you need to look for. You know – to counter the effects of the ill-educated Hardly Normal Spiel.

Myth: Wi-Fi 6 will solve all your problems, its super fast and it will even cook breakfast and make coffee – but you may have to buy some new Wi-Fi 6 compatible devices – bull-s*&t.

If AC5300 does not do it for you, the AX6000 probably will not either! Although it may make more efficient use of the AC bandwidth.

If you have a new Wi-Fi 6 device like the Samsung Galaxy S10 series (review here), these will achieve up to two times more Wi-Fi speed than Wi-Fi AC’s 866bps, but you can get that now with some AX5300 routers anyway.

It will not give you better range (Hardly Normal has already tried to spin that porkie with me). If you have coverage black spots now, Wi-Fi 6 will not fix that. A properly designed network will, and the answer is usually not a Mesh network.

No router can improve the speed of your internet. Wi-Fi 6 is all about internal network speed – not external internet speeds. At a minimum 4K content requires 25Mbps steady streaming or it falls back to 1080p (5Mbps) or 720p (3Mbps) or less. So, the 50% that is true is that Wi-Fi 5 and 6 can stream 4K content wirelessly from the router to the TV.

The 50% BS is getting 4K content to the router over the internet.

If you have ADSL, it will crawl along at somewhere between 5 and 20Mbps (megabits per second) download and 1Mbps upload. The average in Australia is 7.99Mbps – if you are extremely lucky. No router can improve your download speed.

If you have NBN, you can pay for one of four Mbps tiers (Download and Upload)

Now, remember all your network devices have to share this bandwidth.

Security cameras will chew up a fair bit of that; music streaming is about .32Mbps (not too bad), voice over IP (VoIP) is about .064Mbps etc. But if you have 20-30 devices on your network it all adds up.

The real problem is that Wi-Fi signals are half-duplex (think a one-lane road shared by two-way traffic that must pull over when someone else is using it). The router can only send or receive to one device at a time.

So, if your router has 866Mbps and you have four devices it can send or receive at 866Mbps, and it is monogamous – it can only talk to one device at a time. It must use ‘magic’ to via multiple radios/antenna, beamforming, or time slicing to service those four devices. But on average these devices will get 100Mbps speeds.

Most routers have 1Gbps (1000Mbps) dedicated ethernet LAN ports, and these can communicate at full-duplex – two-way traffic with no hold-ups. Ethernet is the key to a well-designed home network.

OK to the Wi-Fi 6 jargon

Prices are likely to start at A$599 (AX6000) and go up from there. Manufacturers see lots of life left in Wi-Fi 5 AC routers so don’t panic thinking you need to upgrade.

GadgetGuy’s take. It is safe to buy Wi-FI 6 but you will pay a premium

In simple terms buy the fastest router with as many bands as you can afford. The two real advantages of Wi-Fi 6 is OFDMA and MU-MIMO. You may not need all that capacity now but add security cameras, smart speakers, smart TV/Blu-ray/soundbar, Netflix et al., and it does not take long to overwhelm a cheaper router.

Over time we will update this tutorial as we get to test more Wi-Fi 6 AX routers.