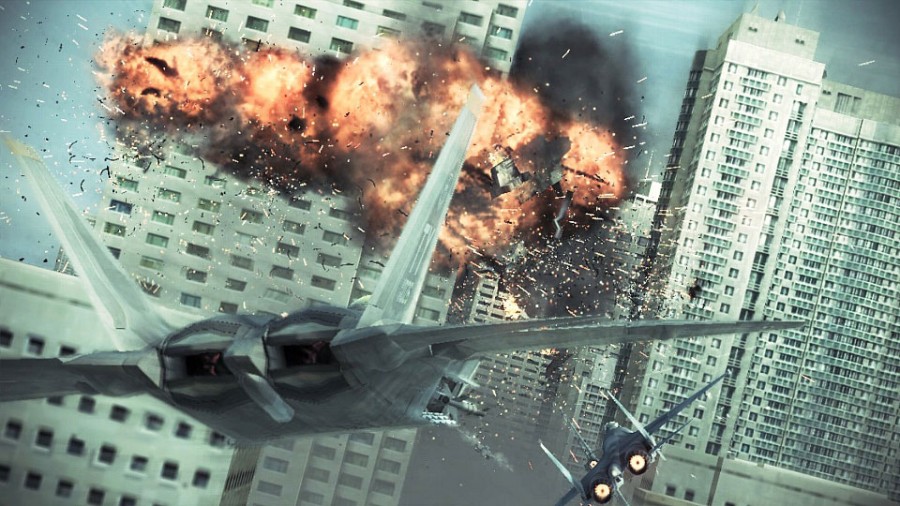 There aren’t many flight combat games around on the videogames scene, so if you know any at all, chances it’s one in the Ace Combat series.

Offering wannabe Mavericks some beautifully detailed and faithfully modelled aircraft to fly, the Japanese-produced franchise usually brought some slightly off-kilter and disjointed storytelling along with it, unfortunately not playing out at all like the Top Gun shenanigans and often feeling disconnected with what you were being asked to do.  And fantastic that the modelling of all the cool fighter jets has been in the Ace Combat games, the core gameplay tended to reduce the player to squinting hard at the screen and attempting to shoot at tiny, retreating specks way off in the distance by loosing off a few guided missiles.

This could be fun, but soon became monotonous and routine; not at all like the pictures you had in your head of being an ace fighter pilot engaging in terrific dog-fights way above the earth’s surface.

With Ace Combat: Assault Horizon, all of that has changed. The storyline is now fully integrated into the game’s campaign mode and its cohesion transforms Ace Combat from a series of disconnected sorties to a fully-realised, immersive piece of videogaming.

A grittier colour palette helps the game approach the authenticity of the likes of the Call of Duty series, too, but the biggest change comes in the core gameplay, itself an incredibly bold move from the game’s Director, Kazutoki Kono.

The ‘Close Range Assault’ (CRA) system is triggered when you have a lock on an enemy plane. Alongside the usual red box framing your target, a flashing circle appears and is your cue to trigger CRA. Right away, the camera zooms in to give you a better view on the plane’s six, and you’re in dogfight mode. The CRA mechanic gives you a visceral kick and, more importantly, greatly increased your chances of scoring a hit on the enemy, be it missiles or machine gun, and registering a quick kill.

CRA also immediately broadens the appeal of the Ace Combat franchise to those less fanatic about flight videogames – particularly given this iteration’s inclusion of other flying machines, including one of man’s greatest inventions, the helicopter – and it’s very telling that the game box has the ‘Ace Combat’ part of the title minimized, mimicking the change in game direction and intended audience.

Gun turret and AWAC-style remote fire missions round out the offering this year, again reminiscent of Modern Warfare but they complement the regular missions very well.

Ace Combat Assault Horizons sometimes falls into the same trap as its predecessors, allowing missions to over-extend themselves and stretch on seemingly forever as you battle unlikely hordes of enemy aircraft, but it’s a massive, welcome improvement over previous versions and enormous fun.