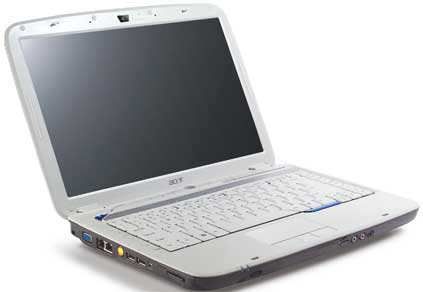 When we asked the various notebook vendors to send us their best multimedia notebooks, we certainly weren’t expecting the likes of the Acer Aspire 4920G. A compact notebook (especially by the standards of most multimedia notebooks), it’s neither particularly powerful nor feature rich. It’s perhaps more suited to playing movies and communicating with friends when you’re on the road than anything else, although it does have TV output and some dedicated media controls that make it a halfway decent system for play as well as work.

It definitely looks like a notebook that was designed to entertainment rather than work. We daresay that Acer has gone a little too far on that score, creating a notebook that looks like it comes from Fisher-Price and has a target market of kids, age five to eight. We suppose that makes it a great choice for school age children, but dad is going to want something with a little more credibility in the boardroom.

Aside from the design, the Aspire boasts features that are quite standard for a mid-range notebook: a 14.1 inch screen, Windows Vista Home Premium, wireless networking and Bluetooth support, Ethernet and a dial-up modem. It has USB and FireWire port, an ExpressCard slot for expansion (you could put a TV tuner card in there) and a flash memory card reader. It also has a DVD player/burner and dedicated buttons for multimedia playback.

As we mentioned, you can plug the Aspire into a TV set so you can watch movies stored on it on a big screen, but you’re quite limited in the options you have. There is no HDMI or DVI output, so you have to use either VGA (which is mostly used on computer monitors) or S-Video/composite, which doesn’t support the highest-definition video.

It has a nifty integrated camera, which can be used for video chatting in programs like Windows Live Messenger. We found the quality of the camera more than adequate for the task.

If you’re looking for a gaming and video powerhouse, the Aspire ain’t it. It has a relatively modest processor – the Intel Core 2 Duo T5450 and a basic ATI graphics processor. There is plenty of hard disk space (160GB), however, and a ton of memory (2GB).

In spite of its modest specs, we found the Aspire a pleasure to use. The processor was more than up to the task of playing downloaded movies, and the keyboard was very comfortable and responsive, making fast typing breezy (perfect for those after school chat sessions). The excellent glide pad almost made us forget our deep and abiding hatred of all glide pads, and the dedicated media controls were logical and effective. The audio was rather tinny, but you can easily plug in headphones.

A good choice for school children and families, the Acer Aspire isn’t going to go into too many lounge rooms except for perhaps the occasional viewing of a downloaded movie. Even for that, its lack of HD output support hurts it, although if you don’t have a HD-capable TV set you probably won’t care. It’s a neat, portable notebook overall, with enough power to do the things that most of us want to do and without any frills to add significantly to the price.