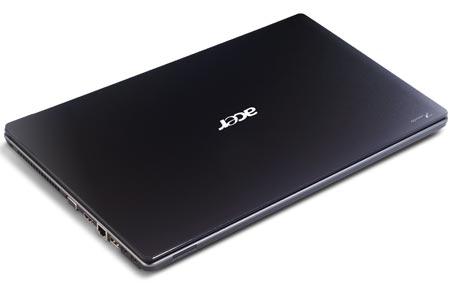 A high-speed laptop capable of playing 3D movies and games – is Acer’s Aspire 5745DG the ultimate media machine for the third dimension?

On paper, the Acer Aspire 5745DG is a multimedia beast. Specs include a 2.6GHz Intel Core i7 processor, 4GB of memory, 320GB hard drive, Blu-ray drive, Windows 7 Home Premium, and Nvidia GeForce GT425M with 1GB memory. The latter couples with Nvidia 3D Vision technology that, mated with the 5745DG’s built-in infrared transmitter and Nvidia’s active shutter 3D glasses (which are supplied with the notebook), means you can enjoy 3D movies and games wherever you go, and without the need of a transmitter accessory.

Simulating surround for your notebook-based 3D vision experience is Dolby Home Theatre, and connections-wise you’re well sorted too, with this Aspire providing VGA, HDMI, Ethernet, headphone, microphone, and four USB ports. WiFi is catered through the “n” standard, offering backwards compatibility with b and g connections.

Cosmetically, there isn’t anything exceptional about the 5745DG. A glossy lid with a lined pattern covers the top, and black plastic protects the bottom. Inside, there’s more plastic, but this time with a brushed aluminium finish and a black, slightly raised keyboard.

Three-D features aside, this machine provides good bang-for-buck. The high speed Intel Core i7 processor shines when running most applications, with very little slowdown noticeable running office applications, web browsing with multiple tabs, and other general use software. A fairly generous 4GB serving of memory should be enough for most users, as should the 320GB hard drive (though a slightly bigger drive would have been nicer).

With its full-sized keyboard, the laptop was comfortable to use  – no cramped hand placements or key mashing here. The touchpad mouse is OK as touchpads go, though for better responsiveness we’d recommend adding and external mouse.

Like many recent model Acer notebooks, the Aspire 5745DB lacks Bluetooth, which is hard to understand considering today’s proliferation of Bluetooth peripherals such as speakers, phones, keyboards and mice.

Upon being fed a 3D Blu-ray movie, the notebook fires up the Acer Arcade application, complete with a “3D” software button that, once selected, displays the disc contents in 3D. The experience is very much like that offered by a 3D TV (albeit a smaller one): without shutter glasses, onscreen images appear blurred and ghosted, but with glasses, the picture has the appearance of real depth.

Image quality is sharp and clear, but shift your angle of view even slightly off-axis and colour depth and brightness suffer noticeably. For best results, then, this LED backlit screen needs to be viewed from directly in front. This disappointingly narrow viewing angle is compounded by the screen’s 1366 x 768 resolution, the minimum standard for HD. While it can be argued that full high definition pictures are not properly realised on a 15 inch display, the 5745DB’s Blu-ray function, 3D cred and premium pricing should make 1920 x 1080 support a given, especially as it now appears in 13 inch notebooks.

Battery life was a mixed bag. Provided you’re not using the 3D glasses, you’ll get between six and eight hours of performance, depending on the applications you’re using. The moment you stick the glasses on and go for that 3D experience, expect the battery life to drop to just under four hours of life.

When it comes to gaming, the optimum experience is had in sans-3D mode. Here, the Acer does a pretty good job, with the Core i7 processor and GeForce GT425 working together to provide great performance on the latest games, provided the graphics settings are not turned all the way up. You’ll get better performance from the graphics chipset with a slightly older game, as we did in our tests, but overall 2D provides a solid experience.

Once 3D is active, that “solid experience” takes a hit, though. For example, during tests using EA’s “Mirror’s Edge” and Capcom’s 3D benchmarking tool for “Resident Evil 5”, excessive jitter and lag was noticeable during sequences of intense movement. Dropping the graphics settings from high to low largely addressed the issue, but this indicates that the GeForce processor used in this laptop is largely underpowered for stereoscopic 3D gaming.

The artefacting we encountered may, however, be peculiar to our test material, and not indicative of the notebook’s performance on all titles compatible with 3D Vision hardware (Nvidia maintains a list of these on its website). In short, some 3D games – in particular, many latest first-person shooters –  are extremely demanding of a PC’s processor and discrete graphics, while older titles are not. The kicker is, you can’t know how well your hardware will manage a title until you’ve laid your money down.

If watching movies and playing the occasional game is what you’re after, the Acer 5745DG is well equipped to satisfy. The addition of 3D is nice, but with Blu-ray on board, a full HD display should have been the way the go. And for the demanding 3D games, the graphics card is a touch inadequate.