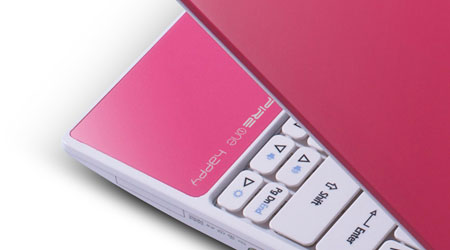 Netbooks are everywhere these days and, with their sharp pricing, are performing strongly in the face of advancing tablet devices. Acer’s new Aspire One Happy takes the tried and true netbook formula, which trades screen size and functionality for portability and long battery life, mixes it with a dash of the Google mobile OS platform, Android, and slaps on a splash of colour.

Encased in a standard white plastic case sits Acer’s Aspire One Happy netbook, a 10.1 inch ultra-portable weighing 1.25kg and fitted out with an Intel Atom dual-core 1.5GHz processor, 1GB of memory, 250GB hard drive, SD card reader, 3 USB ports, WiFi 802.11b/g/n, and a 1.3 megapixel webcam. All of this is pretty standard fair, as is the screen – an LED LCD with a maximum resolution of 1024 x 600 pixels.

The ‘happy’ element is the colour, with Acer accenting the lid and keyboard pad in your choice of candy pink, lavender purple, lime green, and Hawaii blue.

Windows 7 Starter is the primary operating system found on the One, but Google’s Android is also present. This is intended as a faster booting alternative OS, with a button located on the top-left corner to let you jump directly into Windows.

Netbooks don’t claim to be the fastest kids on the block, being intended primarily for web browsing and basic document writing needs. The Happy certainly didn’t fail to please with simple office applications either, but the general speed of operations was a little below expectations. We experienced noticeable lag, for instance, when switching between basic document editing applications while surfing the web, with websites that made heavy use of Flash contributing significantly.

The 1GB of memory found inside the netbook was of little assistance here, being the minimum requirement needed for Windows 7. A 2GB stick would deliver better performance and could be upgraded either by the customer (with a screwdriver) or at a computer shop.

Like all netbooks, the cut-down keyboard will present the usual crowding problems for fat-fingered typists, but it is solid, exhibiting only limited flex and bounce as we tapped away at the keys. Acer’s trackpad area is wide, matching the aspect ratio of the 10.1 inch widescreen  LCD, but we frequently found the mouse button hard to press. We suspect the firm resistance we experienced would relax with extended use.

The screen resolution of 1024 x 600 is a touch out of step with the current norm, with many new 10.1 inch models sporting the higher, HD friendly 1366 x 768 resolution. The 10.1 inch LED screen looks good, however, especally for a netbook, and is as glossy as the plastic white frame that surrounds it. This aids brightness, of course, but also means the surface is very reflective, especially of direct light sources.

We didn’t see any battery optimisation software on the Happy, which is a shame because the rated battery life of 4–5 hours isn’t a huge increase on the first netbooks to emerge three years ago.

There’s also no Bluetooth here, a strange omission given that we see it on pretty much every netbook on the market.

Many notebooks in the past have featured cut-down operating systems as an alternative to Windows, and in the Happy, Acer has provided the option of using Android, an OS typically found on mobile phones. Acer doesn’t actually say why Android was implemented, but it stands as a better alternative than the many flavours of Linus that appears on other netbooks.

For air travellers, we can see the benefit of an operating system like Android, given that users would be able to use applications and enjoy better battery life than what Windows provides, namely because Android is a less demanding OS than Windows 7.

As implemented on the Happy, however, Android has no access to the Market, meaning you can’t customise the OS by downloading other apps. You get what Acer has given you, which is not a whole lot more than image browsing, some music playback, and a web browser. On an aeroplane, we’d certainly prefer an iPod for these activities.

Then there’s the matter of navigating the Android OS on the Happy. With an Android-powered mobile handset, a touchscreen and a back button enable you to easily move between menus and applications. The Happy, of course, doesn’t have these, so you have to use the mouse and keyboard to select items and hit the escape key to go backwards. Shortcuts such as Copy, Cut, and Paste don’t exist, and the mouse, which supports gestures in Windows, won’t support gesture control in Android. Without a back button (like on a mobile phone handset), getting around Android’s menu systems primarily consists of hitting the escape key every time you want to leave a menu.

Acer’s Aspire One Happy is not a bad netbook, just an unremarkable one wearing a colourful jacket. While this will satisfy ultra-portable buyers looking for something more ‘individual’ among the black- and grey-suited netbooks that populate retail shelves, with a better implemenation of Android, Acer would have given the Happy a much stronger point of difference.