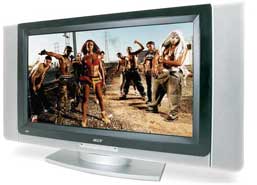 LCD TVs have been rapidly growing in popularity, so it’s no surprise that some traditional IT vendors are bringing their considerable technical experience to the LCD TV market. One such vendor is Acer, which has a long history of impressive LCD monitors for PCs, and is now offering a range of LCD TVs based around the same technology.

To Acer’s credit, the AT3201W doesn’t look like a typical IT product – it’s shiny black bezel and silver speakers should fit nicely in most living rooms. The front of the unit has only a handful of small buttons and a power LED to interrupt the smooth lines. A pivoting base also makes it easy to position the screen or to turn it away from glare.

Most of the connectors are to be found on the right side of the screen, with the power and remaining connectors located at the base of the rear. There are plenty of connectors to choose from too. Composite, S-Video and component are all available, and Acer’s IT pedigree shows with the inclusion of both VGA and DVI-D. The latter is especially good because it provides an uninterrupted digital link between source and screen, so the signal doesn’t become degraded upon being converted to analog.

Acer has made it easy to select the right input, which is especially important if you have multiple sources, such as a set top box, DVD player and VCR all hooked up to the TV. The screen will automatically cycle through all available inputs when you power it on, and will settle quickly on the active input. Another impressive feature is the multiple input buttons on the remote – one for TV, one for AV and one for PC – each of which cycles quickly through all the appropriate inputs and makes selecting the correct input a relatively swift and painless task.

In terms of image quality, the AT3201W is comparable to most contemporary LCD screens, with crisp and colourful picture, especially through the DVI, VGA and component connectors. The resolution is also a hefty 1366 x 768, meaning the screen can easily manage HD signals up to 1080i. Unfortunately the response rate is only a moderate 12ms, which means fast motion does tend to blur. This makes the screen less suited for sports, but the motion blur is less of a problem for regular programs or DVDs.

Acer has also included a dedicated “empowering” button on the remote which cycles through various pre-specified image settings, such as Movie or Sport. You can also adjust individual settings, such as brightness, contrast and colour temperature. The sharpness setting is particularly sensitive, with the top settings giving actually highlighting unwanted detail, such as compression artefacts from a digital transmission. The softer settings tend to give a more pleasing image.

The remote is well laid out, and has all the controls you should need within easy reach. One interesting control is Zoom, which allows you to position a rectangular box on the screen, and then zooms the picture on that area.

Sound is also managed well by the AT3201W. The detachable stereo speakers give crisp sound and good levels of volume, and the SRS WOW surround sound effect is convincing. The volume and bass response are not as good as dedicated speakers, but they’re quite suitable for most television or DVDs.

Possibly the most impressive feature of the AT3201W is the price. The 32 inch LCD TV market is already fairly crowded and highly competitive. As such it’s remarkable that Acer has managed to produce such as high quality screen for a list price of only $2,199, where most of its competitors around the same size are a few hundred dollars more. If you’re looking for a moderate sized flat screen TV with high definition capabilities, and which won’t break the bank, then the Acer AT3201W is well worth a look.