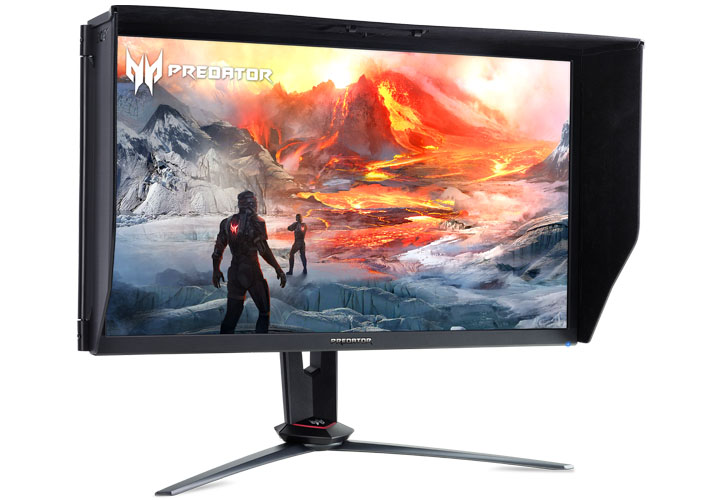 Speed. It’s all about speed. That is, effective gaming. A speedy monitor and a speedy response. But that’s only part of what the Acer Predator XB273K monitor has to offer.

All that can make for faster, smoother gaming. The monitor supports G-Sync, so if throughput slows down (and you’re using a compatible video card), the monitor will kick down the frame rate to avoid things like image tearing.

I like how terms like “overclock” have changed. When I was a much younger man, “overclocking” was fitting a computer with a clock that pushed it past what the manufacturer considered a safe, reliable speed. And so it was frowned upon by them, and probably invalidated the warranty. Now “overclocking” is a built-in feature.

The panel is rated at 350 nits brightness, with 400 nits peak available in HDR mode. The panel is rated at 10 bits and 90% coverage of the DCI-P3 colour gamut. Acer rates the panel as capable of producing 1.07 billion colours (as you’d expect: 10 bits per for each of R, G and B means 2^30th power colours). The native contrast ratio of the panel is 1,000:1 and the grey-to-grey switching speed is 4ms.

The two inputs are DisplayPort and HDMI. There’s also a USB 3.0 Type-B connection, and four USB 3.0 Type A sockets, so you can use the monitor to put lowish-powered USB devices close to hand.

Acer includes in the box of each monitor an individual report bearing the serial number of the particular monitor. The “Color Calibration Testing Report” shows the factory measured and calibrated DeltaE for 32 colours, grey-scale tracking and gamma. Gamma is the way input signal level is mapped to output brightness. Grey-scale tracking shows how closely the greys you get match what you’re supposed to get. Both of those looked impressive on the report.

DeltaE is the “distance” between the actual colour produced and the one supposed to be represented by a particular signal. Generally a DeltaE of less than 2 means indistinguishable by the human eye. On the report, 20 of the 32 colours were less than 2, while only 4 of them had a result of more than 3 (and all were well under 4).

The most obvious physical aspect of the monitor is screen size, which is 27 inches in size – 68.4mm or 26.92 inches if you want to be more precise. The side and top bezels are 18mm wide while the bottom one is a little wider than that. The monitor is mounted on a three-legged stand, hanging out over the front of the pedestal. Even though the rear-pointing leg is fairly stubby, the front of the screen will still be some 250mm in from the rear of the desk. A wall mount is included in the box.

The whole screen can be raised or lowered on the pedestal, from the display area some 90mm from the desk surface at the bottom of its travel, through to 195mm at the top. It slid smoothly and easily.

It can also swivel left to right by up to twenty degrees in each direction, plus down by five degrees and up by  25 degrees.

A strip of LED lights along the bottom as well as a chevron-shaped set at the top rear of the monitor provide ambient lighting behind the monitor should you want it. It came out of the box with a blue hue and a “breathing” pulsation, but the monitor seemed to have been used before getting to me so that may have been someone else’s preference. You can choose the colour, choose whether you want the up or down or both sets of light, and the pattern of the display. I can’t imagine anyone would want to use the rapid flash option.

And, of course, you can just switch it off.

That’s what you’re likely to want to do if you just want to concentrate on the on-screen action. If you want to concentrate even more intently, you can fit the included top and side panels. These are made from sturdy-enough plastic, lined with a velvety material on the inner surface to avoid distracting reflections.

The main control for the monitor is a joystick just behind its bottom right corner. You use that to navigate an on-screen menu. Four additional buttons are back there to select certain things.

I feel that in this section I ought to simply write: “Yes, if you must.” “Yes”? Yes, the monitor incorporates stereo speakers, apparently with four watts per side. They fire downwards. Bass? None. Stereo effect? Surprisingly effective. If you must use them, experiment with the height of the monitor and what you keep underneath it, since they can affect the sound.

“If you must”? Yes, only use the built in speakers if you must. One of the fundamental rules of any kind of AV entertainment – and gaming is part of that – is having the picture and sound in proportion to each other. With a very high quality monitor, you do not want tinny speakers. Even if you’re not in position to come up with a high end speaker system, look around your house or hit Gum Tree and you’ll be able to find some speakers at a low price, and some amplifier to drive them. And they’re going to sound better than the speakers in this monitor.

There’s a 3.5mm headphone output on the monitor.

My desktop is fitted with an NVidea GeForce GRTX 1050 Ti graphics card. Even though I switched the monitor to Overclocked mode, my card would only go up to 120 hertz. (“Only,” he says, after being stuck for decades at 60 hertz!) But there were a whole range of refresh rates on offer: 24, 30, 60, 82 and 98 in addition to 120. All worked fine. Except for the occasional random flicker at 120 hertz. Cause? Who knows. Perhaps my video card. Perhaps my DisplayPort cable. Perhaps the monitor. When I backed down to 98 hertz, the picture was extremely solid.

All motion was smooth and clear. There was no smearing on the fastest moving stuff that I was able to discern.

The other aspect of speed is latency: the time between when a signal hits the input circuitry of the monitor and when the resulting image appears on the screen. For keen gamers, especially those who enjoy first person shooters and other games where reactive speed is important, the lower the latency the better.

My latency testing device only works at 60 hertz and only via HDMI. It disclosed different speeds depending on where the image was drawn on the screen. The Acer Predator XB273K monitor conforms the usual conventions of drawing its picture from top to bottom. At the top the latency was 9.9 milliseconds. At the bottom it was 17.6 milliseconds. In the middle of the screen it was 13.7 milliseconds.

A typical human reaction time is around 250 milliseconds for a visual stimulus, so the Acer Predator XB273K monitor is extending that by well under ten per cent. By way of contrast, a typical UltraHD TV in standard viewing mode has a latency of around 120 milliseconds. If your games machine is plugged into one of those and you find yourself never able to react in time, check to see if there’s a “Games Mode” on the TV. But even in “Games Mode”, most TVs are still up around 40ms. So to really play her, change to a fast monitor like this one.

As far as I could work out, the panel used by the Acer Predator XB273K does not employ local dimming zones for the backlights. When I used test patterns to see whether the backlight effect was confined to the bright areas, I could see a fair bit of light leaking through the black near the corners of the monitor. This was the case even when I had a full black screen showing, so it seems that there is no global dimming either.

But that was in a dark room, which is the best way to test that kind of performance. At the other end of the scale the monitor delivered a strong, very bright picture with bold, clean colours. I found it more satisfying to look at darker content with room lights low, but on.

The Acer Predator XB273K is a first class monitor for gamers. You’ll need a decent graphics card to take full advantage of its speed. But, heh, which gamers don’t have one of those?

Acer’s website for this monitor is here. See the other monitors we’ve reviewed here.

Features
Value for money
Performance
Ease of use
Design
Fast: high frame rate, low latency
UltraHD resolution
Comes at quite a cost
Not ideal for critical viewing of dark scenes and images
4.6