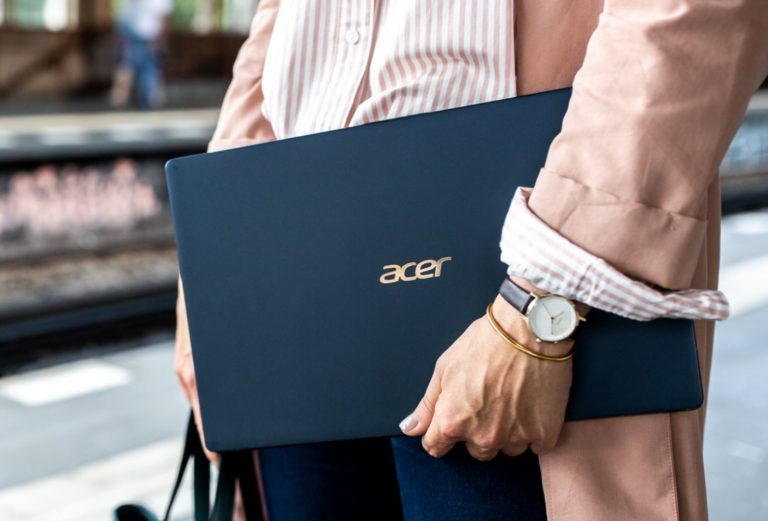 The Acer Swift 5 15.6-inch does not stand out from the crowd – it’s the Ant-man of the ultra-lights at 999g – just under the magic 1kg – a feat not repeated by any other brand.

Simple – it uses ultra-thin buy ultra-tough magnesium-lithium and magnesium-aluminium alloys. When you first pick it up, you expect at least 1.5kg, but its feather light at 999g and you are impressed – very impressed.

Channel Seven GadgetGuy Val Quin said, “You think its plastic but its not. This is amazing with almost no bezels, a huge bright screen, Core i7 and so many ports – great to travel with.”

I could not have said it better – in a sea of normality this is different.

Review: What makes the Acer Swift 5 15.6-inch so different?

What do you lose by this?

Everything is soldered to the motherboard – it is not upgradable. But it does have an empty M.2 PCIe socket for expansion.

Sure, a Thunderbolt 3 port would have been nice too, but USB-C 3.1 Gen 1 is fine with a dock or dongle.

In March we reviewed the 14-inch version of the Swift 5 (SF514-52T). We gave it a four-out-of-five because, while the concept was excellent, the choice of some components was average. For example, the dim 250nit and highly reflective screen and a slow SATA 6 SSD. Fix both of those, and it would have been a five-out-of-five.

Well, guess what – the Acer Swift 5, 15.6-inch addresses all this and based on that it will have our strongest recommendation in the ultra-ultra-light category.

As we have reviewed the 14-inch Swift, we will keep this review briefer.

Screen – one of the best you will see

In our tests, brightness peaked at 350 nits and typically was around 330 nits. Contrast is about 1100:1. It is a bright screen although the glossy finish does limit bright outdoor use.

It has 100% sRBG or about 76% Adobe RGB. DeltaE is 2.2 anything under 3 is good) and you can tweak that down further. Its colour temperature is a tad cool in default settings at 6700K but use the Intel Graphics setting, and you can get it spot on at 6500K. It is completely flicker-free. G-T-G is 38ms – fine for web-based games.

Screen summary: One of the best FHD screens I have seen and using WLED achieves far brighter colours that we all love. At 100% sRGB web designers would be very happy.

Yes, it is throttled to achieve good thermal efficiency. In normal use the underside reached mid-30° and after a full load test reached 45° which is warm but not uncomfortable. Fan noise ranged from 30 to 35dB – whisper quiet.

According to PC User Benchmarks the i7 outsells the i5 by 50%, and the most popular configuration is 8GB DDR4 RAM and 512GB PCIe NVMe SSD.

Again, it is what you can get in a thin and light device. It uses two lanes as the PCI express lanes are otherwise being used to provide the USB-A, USB-C and HDMI outputs. But there is an M.2 slot with four lanes available under the bonnet so that may solve any expansion needs.

It is a 45W battery, and a 45W charger so don’t expect a fast charge – around 1.5 hours. The nice thing is that battery replacements are easy to find for under $100.

In 1080p video playback at 50% brightness and Wi-Fi off it achieved over 8 hours.

In office productivity with Office 365 and web surfing, it just made 10 hours.

In all, given the lightness of the laptop and USB-C PD power bank recharging ability – this is great.

It is a full-size chiclet-style keyboard with shrunken Function and arrow keys. The keys use the same metal and lettering is a decal. As such they will wear with extended use.

It has an on-or-off under-key backlight. The throw is 1.2mm and actuation is 60g meaning you need to press the keys fully, and that can slow down typing – the quest for thinness.

The Synaptics trackpad is accurate and offers 100% screen control in one swipe.

The EgisTec fingerprint reader is fast and accurate.

Dual down-firing speakers do a good job given that there is no area for resonance. Of course, there was no bass at all, mids started at 200Hz and built to 500Hz before flattening through to 16kHz.

It is a bright vocal (clear voice) verging on analytical (aggressively bright), and while that is fine for office use, you will need to use a good set of headphones to get more.

It has Dolby Audio Premium drives for headphones that offer pre-sets for Movie, Music, Game, Voice or custom EQ. Maximum volume is 76dB.

This is the Ant-man champion, and it has come from Acer – not a behemoth like HP or Lenovo. It feels fragile but it’s not. It has a great screen (way better than the 14-inch) and fantastic battery life. Add to that the is 100% sRBG with above average brightness – you cannot go wrong.

The 14-inch versions are more expensive as they have 16GB RAM.

Acer is sold via a network of computer dealers so you may be able to drive a bargain.

Features
Value for money
Performance
Ease of Use
Design
Reader Rating3 Votes
Ant-man light under 1kg
Very accurate colours and bright screen
USB-C for data/charge/video and audio
More connectivity than you need – can run HDMI and a third monitor over USB-C
Great battery life
Throttling is always an issue – here you are paying for a V8 but getting V6 performance
4.6