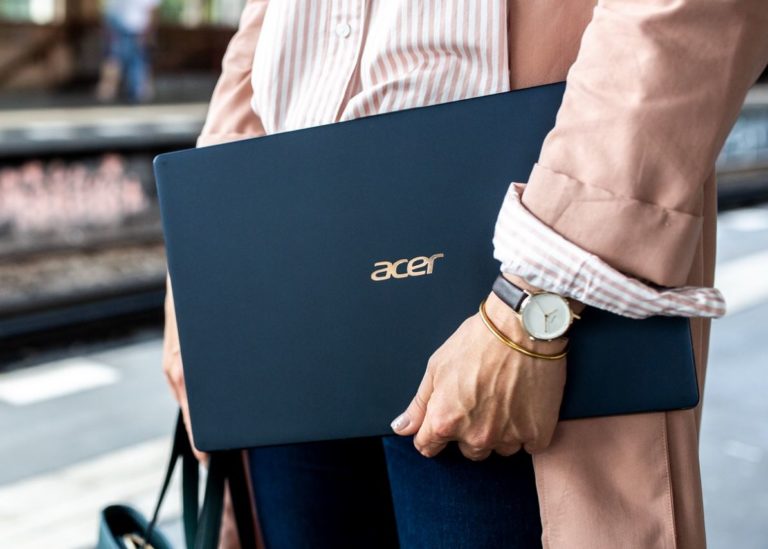 The Acer Swift 5 comes in a 14 and 15.6-inch, Intel Core i5 and i7, models weighing in at less than 1kg they are easily the lightest notebooks for the screen size.

What is an Acer Swift 5?

The Acer Swift 5 is an ultra-light (<1kg), ultra-thin (magnesium-lithium and alloy construction), huge 14/15.6-inch FHD screen (in essentially a 13/14” body due to narrow bezels); powered by Intel 8th Generation Core i5/i7; SSD; and a claimed 10-hour battery. Prices range from $1799 to $2499 giving excellent value for what looks like a first-rate, uber-light device.

Acer (Australia) has been hiding their light under a bushel for the past few years. GadgetGuy caught up with its MD Acer Oceanic Region Darren Simmons late last year and reminisced about the good old days (read naughty 90’s) when Acer dominated the PC and notebook scene.

Not that it ever left the scene, but I suspect HP, Lenovo, and Dell aggressively outspent the Taiwanese company to get market dominance. Simmons says that is changing and GadgetGuy says make sure Acer is on your shopping list.

The Notebook and a 19V/2.37A (45W) charger. Oh, and it has an International Travelers Warranty (ITW) that gives you security and peace of mind when travelling.

The first impression is almost impossibly light and a rather nice matte royal blue finish with gold highlights. Made from a magnesium-aluminium alloy chassis and magnesium-lithium shell – it weighs about 40% less than traditional laptops of this size.

The base is removable (Torx T5 screws) and the SSD (two slots), battery and Wi-Fi card are replaceable.

There is no white light bleed from the lower bezel, and its flicker free. It has a Blue-light shield that can reduce blue-light.

It is fine under office lighting, but the lower nits and glossy screen are not good in daylight. It is just not as good as the 15.6-inch, 100% sRGB, 300nit, which I suspect is the one to buy!

It is a full-size chiclet-style keyboard with shrunken Function and arrow keys. The keys use the same metal and lettering is a decal. As such they will wear with use.

It uses the older style under-key backlight (instead of through the keycaps) that is either on or deactivated. Key throw is 1.2mm and activation is 60g. In other words, you need to press the keys fully and it will be a little slower to type. Such is the quest for thinness.

The Synaptics trackpad is accurate and moves the cursor from top-right to bottom-left in one sweep. It supports four finger gestures.

A bonus is an EgisTec fingerprint sensor (below the arrow keys) that is fast and accurate.

But it throttles dramatically under load and when on battery. At full load or on battery the best we could get was 1.8GHz. (the base GHz) We did achieve 2.4GHz on power in lighter office use. I suspect energy management is too aggressive and we may have been able to do a little better.

The fan is almost silent – the worst was 36dB. After running full load tests, the top of the keyboard pad reached 38°, and underneath was 42° -warm but usable.

Intel UHD Graphics 620 supports up to two 4K@60Hz external screens. One via HDMI and the other via USB-C display port.

It is not a gamer’s device having 30ms g-t-g response.

It has 16GB (RAM is not upgradable). About 14GB is available.

It has a 512GB SATA 6 SSD (Two M.2 Slot so you could consider one an inexpensive Intel Optane upgrade.

I am a little disappointed to see the SSD is SATA 6 instead of PCIe NMVe. This means around 500MBps sequential read/write whereas NVMe is 2000-3000MBps. Still, a SATA 6 HDD would be half the SSD, and this handles larger random read/write file transfers well.

We understand that the two M.2 slots support NVMe SSD (I know exactly what I would be doing if I bought one).

Despite the thinness you get

This is fine for personal use.

BT 4.2 is fine but only supports the SBC codec.

A notebook needs to be able to achieve at least 75dB for personal listening. This was 68dB flat out with occasional 70dB peaks.

Bass, if you call it that, started at 125Hz (good bass is from 50Hz), mids were linear to 2kHz and highs linear to 12.5kHz then dropped off a cliff.

This is Bright Vocal, and frankly, it sounds ‘tinny’ with reasonable levels of distortion – certainly not what you want to listen to in movies or music.

We played with the Dolby Audio settings, but it did not make much of a difference to the speaker’s natural tone.

It has Dolby Audio and Atmos for headphones, and that makes a huge difference. Pre-sets for Dynamic, Movie, Music, Game and Voice make an appreciable difference when used with our Sony WH-1000MX3 headphones, but the SBC codec does not support Hi-Res sound.

In a continuous FHD video loop at 50% screen brightness and Wi-Fi off it went for over eight hours. In Office mode, it gave just over five-hours of solid use with Office 365, Wi-Fi, browsing and more.

It will charge via the USB-C port. I tried with the 45W Belkin charger, but I suspect the 60W Cygnett USB-C charger would be even faster. Tests with a Kensington USB-C SD4600P USB-C dock with power was fine.

When I first saw the 15-inch version late last year, I was intrigued and impressed. It looked very good.

The 14-inch version is competent, but it reminds me more of an early 2018 device, and we have stepped up a generation since. The 15.6-inch version seems more recent, but apart from Acer online, it does not seem to be in stores yet.

Here compromise is the name of the game. The screen is OK (but not in daylight), performance is OK (but it is heavily throttled), SATA 6 SSD is slow (OK add Intel Optane or retrofit a PCIe NVME), and apart from its weight, it is nothing to write home about.

At $2499 it only offers the lightweight over competitors superior features and value. Still if weight is your main issue then its 5-out-of-5.

Price: Corner PC stores sell Acer. The Swift 5 NX.GTMSA.014 (as reviewed) is online for $1699. If you pay that price, it’s a bargain worth considering.

Features
Value for money
Performance
Ease of Use
Design
Reader Rating0 Votes
Slim and light - no peer
Adequate battery life and a bonus of USB-C charging as well as the 'brick'
Solid all metal build
Dim, highly reflective screen
SATA 6 SSD is slow (would have expected PCIe NMVe)
Below average sound
No microSD slot
4