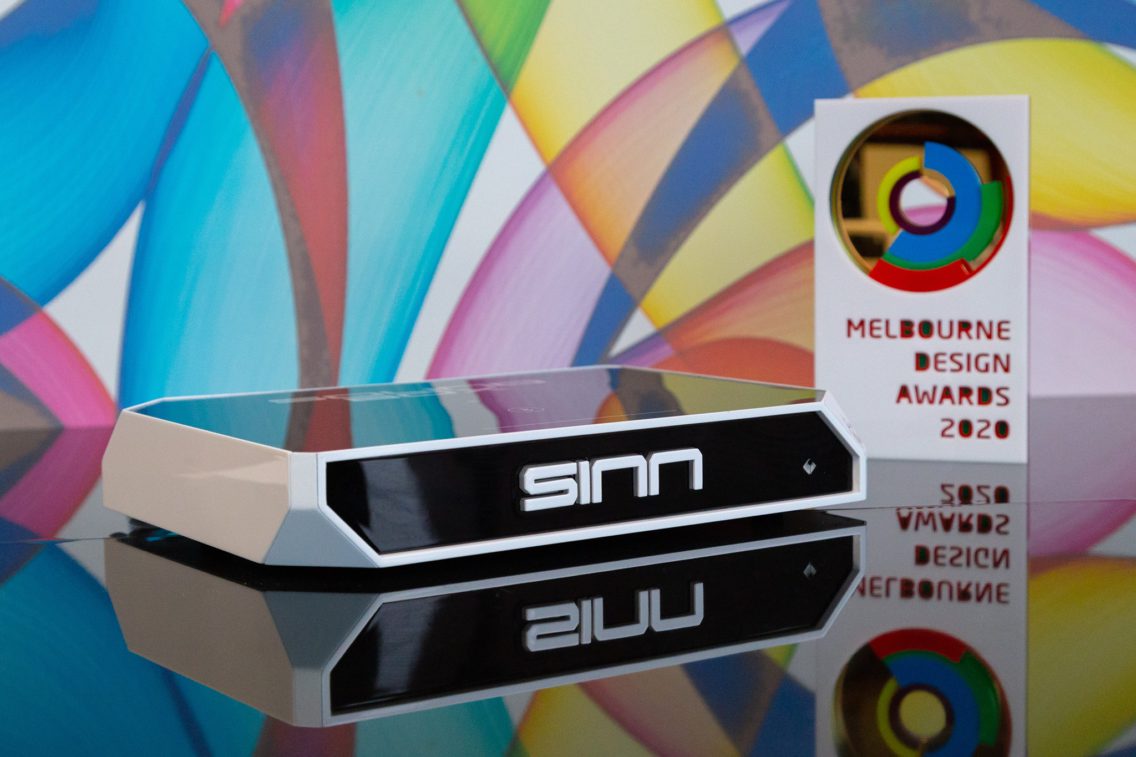 SinnSoundBox is simply one of the most pleasurable listening experiences for streaming music, movies, TV shows – any sound. Why? Because this add on decoder box creates a highly realistic 4.0 – 360° sound field from any stereo sound.

It is a ‘black’ box (well, black and white) that takes any digital Bluetooth or analogue AUX-in stereo 2.0 signal (or Optical Digital with an adapter) and outputs 4.0 ‘quadrophonic’ sound. It is not magic, but it took an Aussie entrepreneur Henry Sinn to bring it to market (I bet he had a great nickname at school) with more than 20 years of experience in technology and telecommunications.

And as it is a black box, it is more important than ever for GadgetGuy to tell you more about this and how we set it up without the benefit of a manual – not that an audiophile needs one.

What is a SinnSoundBox and what does it do?

Let’s start with the basics. It takes a left/right 2.0 stereo signal over Bluetooth (digital) or 3.5mm AUX-in (analogue left/right RCA) and processes it via an SM (spatial modulation) decoder to 4.0. Decoded sound is output to four speakers (or 4.1 with a powered crossover subwoofer).

It is not simply an ‘upscaler‘ as a 4K TV does (wrapping the same pixels around 1080p pixels). It does not ‘copy’ sound to create four outputs! SinnSound recreates sound as it should be.

Why it works, in theory, is simple enough. We hear with two ears, yet we hear from all around us – left, right, front, back, overhead, below etc. Stereo sound recording uses two microphones (or many mics mixed down to two channels), and those directional ‘hints’ remain part of the audio stream. The SM decoder presents the ‘likelihood’ that sound comes from a front left/right or left/right rear speakers.

For our primary test, we used Pink Floyd’s Dark Side of the Moon (a throwback to my youth and one of the first Quadrophonic records I ever owned). Rolling Stone Magazine said at the time, “It has a textural and conceptual richness that not only invites but demands involvement”. And it did now as it did then! I was a teenager again.

In the absence of a manual, there is a pretty sketchy diagram in the box.

First, you need a space big enough to appreciate 4.0 sound – probably at least 5 x 5 m square. You want to sit almost equidistant from all four speakers, although the rear speakers have a separate volume adjustment, so you can cheat a little with placement.

Next, you need four identical speakers. I already had four Jamo bookshelf speakers noted for their clean audio performance. Now, this is important as many readers have decent 4 to 8 Ohm speakers lying around. If not, SimmSound has an $1855 bundle with 4 x ELAC Debut 2.0 (Woofer and crossover tweeter). These speakers retail here for about $355 each! Speakers are what you hear, so while my Jamo’s gave crystal clear sound, other speakers may have different characteristics.

Next, you need to lay four speaker cable pairs, keeping left and right channels in phase. These connect to the SinnSound via spring-loaded clips. There is an RCA sub-out (not tested) for a powered crossover sub-woofer.

Plugin the power (24V/4A/96W DC plug pack) and switch on. Then touch the front power sensor, and it lights up.

A Bluetooth 5.0 connection is easiest via NFC pairing (for a smartphone) or standard BT pairing for a PC/Mac/iPad/Tablet. The 3.5mm to 2 x RCA AUX-in was easiest for the laptop.

Also on the rear are two USB-A ports (not tested) marked 5V/2.1A (1A if both used), RCA Front L/R and Rear L/R lineout. There is a touch slider volume control.

This is a classic case of garbage in, garbage out. It supports Bluetooth SBC (sub-band coding standard codec) and a maximum of up to 24bit/96kHz. Set your streaming for maximum quality (at least 16-bit/44.,1kHz)  because crappy ripped 8-bit MP3s don’t sound all that different. I wondered why it did not support AAC and other lossless codecs, but an audiophile mate cleared that up, “It is all you need to do this job.”

The analogue input produced significantly better sound than the BT SBC codec as it avoids the digital to analogue conversion (DAC) stage, which can cause some ‘lossiness’. Our best results were from a turntable, vinyl, and a preamp – spectacular. But using a 3.5mm port from a Windows Surface Pro 7 was almost as good.

It uses a pair of Texas Instruments 60W (1% THD+N) stereo into 8 Ω Class-D amps. These amps are in high-end soundbars and better active speakers. That means each channel is a maximum of 60W, and that is plenty to drive bookshelf speakers.

There was some harmonic distortion at 84dB (maximum volume), so we backed off a few decibels. Volume and sound quality depend on your host audio source, speakers, and cables.

We don’t think this is quite audiophile-grade equipment. You know how particular audiophiles get about their music.

The use case is to get ‘more’ from your 2.0 sound – whether it is vinyl, Spotify, or TV. That ‘more’ is the real immersion in 360° surround sound. No, it is not Dolby Atmos – there are no 3D height channels. Read our Dummies guide to Dolby Atmos – vastly simplified (one page).

And I can’t help but feel that the technology is there for SinSound Mark 2 – a 5.0 (5.1) decoder that is missing the opportunity (for TV at least) to add a centre channel for clear dialogue. But in our test with the latest LG QNED Mini-LED, we did not need a centre channel – it was crystal clear.

TV/streaming now offers many programs in Dolby Digital formats from 2.0 to 5.1, so you need the right type of soundbar or decoder for that experience – this is 2.0 in and 4.0 out.

Adding a SinnSoundBox made it an absolute joy to listen to 2.0 music from Spotify in 4.0 faux quadraphonic. You could sit back and immerse yourself in a way that only 360° discrete speakers can do.

I have a 5.1 Pioneer AV Amp that provides a simulated surround, so I put it to the test. With genuine 5.1 Dolby Digital, it was streets ahead of of SinnsoundBox as each speaker has a discrete audio channel and amp.

But when fed a 2.0 signal from a turntable and vinyl, the SinnSoundBox came into its own, producing a realistic 4.0 sound stage where the AV AMP could only provide a weak approximation.

We have nothing to compare it to. Yes, there are other 4.0 and 5.1 decoder boxes, but these are more for enthusiasts. This works the first time, every time.

Price: What you pay. Considering a reasonable 5.1 amp and speakers can cost $3,000 or more, this may just do the trick.

Features
8
Value for money
8
Performance
9
Ease of use
9
Design
8.5
Positives
Changes stereo 2.0 to quadrophonic 4.0 with fantastic accuracy
Simple setup buy find the right listening space
Purely for listening pleasure
60-day money-back guarantee
Negatives
Would not have minded a manual and specifications on the website
Not the easiest sell – you need to hear it to love it
8.5