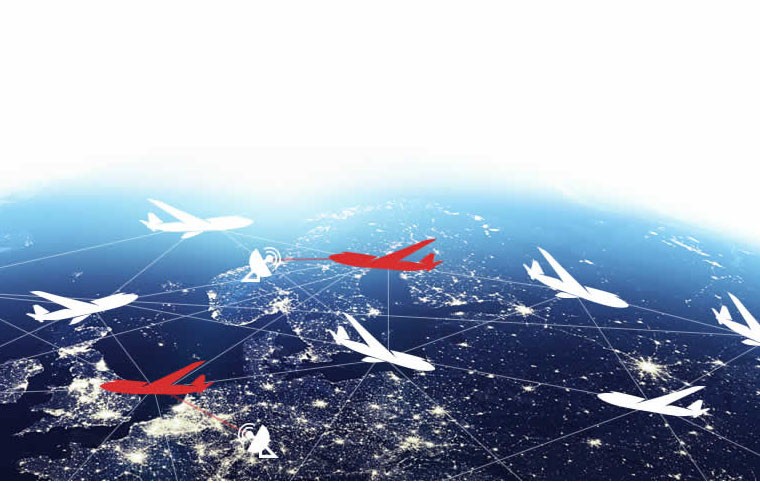 It turns out that the company Airborne Wireless Network is developing something called the “Infinitus Super Highway”. The purpose? To add an additional route by which digital data can scoot around the world. The company is pretty clear:

It has its own “patented air-to-air communication system”. Using this it will link commercial aircraft while they’re flying. Not so much to allow people on the plane to continue their Internet use – that’s happening anyway – but so that each plane can act as an “airborne repeater or router, sending and receiving broadband signals” to and from others, “creating a digital superhighway in the sky”.

There are many thousands of airplanes in the air at any one time. If each is a repeater station, essentially a mini node in the Internet, connecting with all the other flying nodes within reach, then the number of pathways and ultimate capacity of the system expands. Air travel is constantly growing, so the number of aircraft is also growing, and thus the number of potential nodes.

All this is still a long way away. The FCC licence is for “experimental operating” of the system. The company is planning on testing both on the ground and in flight its demonstration system, using two Boeing airplanes. It will “pass broadband data between each aircraft inflight and a ground station, in a first of its kind air-to-air and air-to-ground meshed network link”.

I imagine this will allow the company to work out the relationship between aircraft distances and throughput, power consumption and so on.

Of course, there’s a lot standing between now and an additional network of Internet nodes and channels in the sky. Presumably air carriers will want their cut for carrying the necessary equipment and providing power, and the areas best served due to highest air traffic density will tend to be the areas best served by on-ground infrastructure.

Still, this makes for an intriguing new way of getting all those bits from where they are to where they need to be.