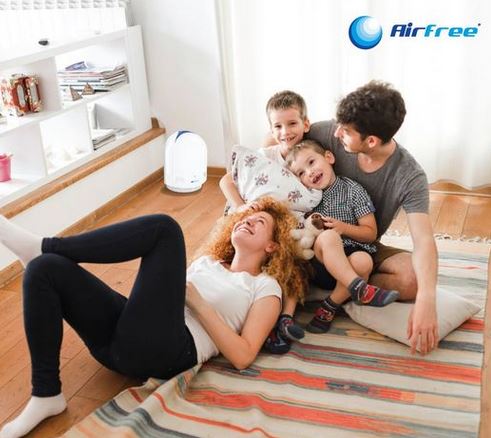 Airfree makes a range of air purifiers, but they are not what you would normally expect. They are air sterilisers that inactivate airborne contaminants. This includes virus, bacteria, pollen, organic odours, pet dander allergens, mould, dust mite allergens and even decomposes Ozone (O3) to Oxygen (O2).

Why is an Airfree air purifier not what you expect?

First, let me say it has been a real challenge devising test paradigm for a device that sits in a corner and apparently does nothing! Among other things, Air purifiers (reviews here) normally use Clean Air Delivery Rate (CADR), Filter Efficiency (HEPA and activated charcoal), have timers, fan settings, and are measured against noise decibels.

This does none of that – zip, nada, zilch. So, we have to rethink how to test and to learn if it works or is just an expensive toy.

There are no moving parts, no fans, nothing – just a pretty LED light grill on top of a tulip-shaped small unit.

It works on the convection principle. Hot air rises out the top drawing in lower cold air from the base. As it rises, it goes through a 200°C TSS (Thermodynamic Sterilising System) ceramic core – a marketing term – not a scientific one. It is basically a hotplate.

So, for all intents and purposes, it just sits there 24x7x365 inactivating any airborne ‘bugs’ (let’s use the term generically) unlucky enough to waft into the convection airstream. And it decomposes Ozone molecules to Oxygen (at temperatures above 192.2°C).

Sceptics would LOL at this point – I did!

How can a passive device sterilise the air? I mean don’t you at least need a fan to draw in air?

Airfree is a Portuguese company. Portugal is renowned for great presunto (cured prosciutto), Port, Portuguese custard tarts, canned sardines and it grows over 50% of the world’s cork. But science – hmmm?

The Airfree concept has been in use since 2004. It is for consumer and commercial use, particularly hospitals where this silent steriliser can inactivate 99.99% of airborne bugs.

Airfree points to numerous scientific tests and I have pored over these. Let me tell you what I found.

And note that Airfree will be selling the Duo – it has a fan and an activated charcoal filter.

Prices – well Airfree Australia (the website is loosely translated from Portuguese so forgive them) is just setting up distribution here so at present you will find them on eBay or at Wilcomp.

Other products will be available online at Catch of the Day in late November including the new Duo (it has a fan!), Baby Air 80, and T40.

We tested this via our EmberiQ meter and it was drawing 57W.

While Airfree claims that it has low energy consumption we think it is fairly high for a passive device. It is equivalent to leaving a 60W light bulb on 24/7 (or 12 LED downlights).

The hot air cools slightly as rises from the top. AirFree states it is equivalent to the heat that a 70kg person produces.

We measured 76° at the top outlet. Now that is not burning (boiling water is 100°) and won’t hurt anyone if they put their hand on it but it is quite warm.

Placement and Safety – PASS with a caveat

Its relatively small and light. If placed on a floor (as recommended – no higher than 75cm off the floor) children or pets could knock it over. There is a safety cut-out, and the LED light will flash.

The power cable is approx. 1.4m. Airfree says to place in an area with air circulation. The manual says avoid placement near open doors, curtains or windows to prevent sterilised air exiting the room.

Nightlight – PASS but it is blue light

Blue light can interfere with circadian rhythms for sleep. You can turn the light off.

There is nothing to replace. As far as I can find, there is no set lifespan of the TSS chamber. Expect at least five years, if not many more.

As it does not have a fan, there should be little build-up of dust on the air intake/outflow areas.

The warranty is 2-years if purchased from an approved Australian reseller ACL applies. Australian Consumer Law states the supplier must pay freight both ways if it is not easy for you to return it!

The body is made from polycarbonate which can undergo large deformations without cracking or breaking. it complies with California’s Proposition 65.

What it is not – PASS

So, what did we learn about Airfree? Does it work – PASS

I have read everything I can, all reviews and tests. Most are positive, and all mention that you have to have faith that it works. The negative ones say that they have not noticed a reduction in sneezing, coughing etc.

And that is the conundrum. You cannot rate it as an air purifier. But from two weeks of testing all I can say is that I think it works. I have no proof; I cannot measure ‘bug’ reduction.

We have now been testing for a month in a 25m2 bedroom. Has there been noticeable effects? Well as a chronic hay-fever sufferer I think so. Where I would normally sniff and snort all night long I appear to have a clear nose. So we will pay that one.

If it works as it seems then yes, especially as I suffer from hay fever and allergy. However, I think its a tad over-priced.

Most will still need larger room-sized filter-based air purifiers to remove smoke, particulate matter and SO2 (volatile gasses). If anything, these do make a visible difference to dust reduction.

It is not an air purifier. There are no established benchmarks for air sterilisers, so we will start as PASS 4/5.

BTW Productreview.com.au has a five-star rating from six users who all comment on the effectiveness for allergies and coughs – let’s hope.

The video below is for an older model – looks similar and explains what it does.

Features
8
Value for money
7
Performance
7.6
Ease of Use
9.8
Design
8
100% silent
No moving parts to breakdown
No filters to replace - set and forget
Small and lightweight but best left on 24x7x365
Nightlight function (adjustable)
Works best in an area where there is other air circulation
Does not remove Particulate Matter like an air purifier
Only works for airborne pathogens
Several units needed to cover a larger area
Could create a heat load in smaller areas (minimum 10m3)
8.1