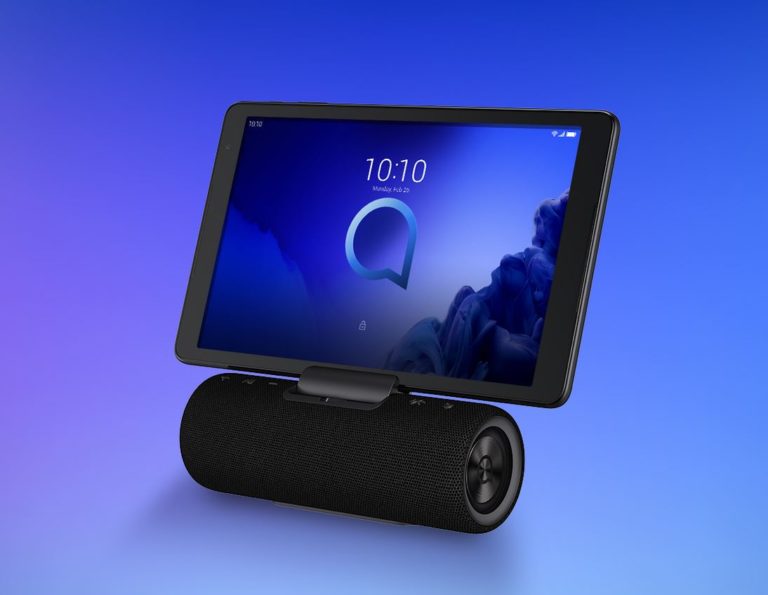 The Alcatel 3T 10 is a 10-inch HD, Android tablet and a separate Audio Station (dock). It is a budget entertainment tablet replete with Google Android 9 and Google Assistant.

The Alcatel 3T 10 is a $324 device with single Telstra 4G LTE compatible data sim slot. Though Google Duo, you can also use it as a hands-free calling and receiving device as you would use Google Assistant speakers.

You can see where the Alcatel 3T 10 came from. Alcatel’s insistence on good value and reasonable functionality over ‘gloss’.

Alcatel is best known as a significant supplier in the Australian pre-paid and mass-market phone segment. It makes good, honest, Android phones with full Australian ACMA and Telco certification and provides terrific local support. Telcos either sell these as white labels or as the Alcatel 1 and 3 series.

Add to that its long-term sponsorship of the Sydney Rabbitohs and you know it’s a dinkum Aussie company – albeit owned by Chinese electronics giant TCL.

TCL also holds licences to brands including BlackBerry and Palm. It recently announced it would also sell phones under the TCL brand (as it does in China). It is also gaining a solid reputation here for TV and Home appliances.

Q: Do we judge this as a tablet and Audio Station dock or as a Google Assistant wannabe?

The black fabric covered Audio Station has a passive bass radiator at either end, 2 x 5W, 40mm stereo front-firing speakers, BT 4.2, Aux-in, POGO pin (data and charge) and micro-SD slot. It will charge the tablet with the 5V/2A micro-USB charger when docked.

I unapologetically use the term ‘generic’. And perhaps that is intentional as it is not competing with Google Screens that seem to differentiate on design cred – colour, texture, shape and more to define this category. This is a tablet sitting on a black cylinder.

The screen brightness maxes out at 275 nits. It is a little uneven across the screen with a distinct bright patch above the bottom edge. We know this type of panel and its capable of higher brightness but we suspect it is governed to preserve battery life.

It does not have a light sensor to auto-adjust the brightness. We found almost full brightness was mandatory. At this level, pulse width modulation is not evident.

Contrast is also low at 800:1. While this is OK inside a home, the glossy screen makes it almost unreadable in direct sunlight.

Being TFT, it has a narrower viewing angle. Nor is colour accuracy overly impressive (about 50% sRGB).

But, at this price, you don’t get HDR or wide colour gamut. Having said that it is fine for YouTube video and still image slideshows. Response times are over 60ms G-t-G, so it is not for gamers.

Laggy would be the word that comes to mind. Every action has a perceptible lag, and we suspect it is because the four processor cores range from 299-1274Mhz with an over-emphasis on and heat management rather than power.

According to AIDA 64 test software, it is a four-core, 64-bit chip running in 32-bit mode. This enables the use of less memory and has some performance trade-offs but is a feature of most lower-cost devices.

The PowerVR Rogue GE8100 GPU is OK for low frame rate mobile games. It supports H.264 encoding and up to H.265/HVEC decoding (playback).

This SoC throttles severely, only sustaining full power for one minute then dropping by over 50% for the much of the 15-minute test.

While CPU Throttling is not all bad, it does relate to the efficiency 28nm SoC and the heat dissipation mechanism. This reached 50° which, while inside, is perfectly acceptable on the outside.

If you are a casual user, then throttling is not an issue. If you are video tragic or are a heavier user, it could be.

Cat 4/5 speed (theoretical claim) is 150/50Mbps DL/UL, but we were unable to achieve more than 80/36Mbps in a 4-bar strong reception area. Again that is not an issue unless you need fast mobile data download.

Where I live, 4G signals are weak. The tablet dropped back to 3G on Telstra’s 2100MHz band barely able to sustain 20/4Mbps. By comparison, the Samsung Galaxy Note10+ was using band 28 on Telstra’s 4G and getting far higher speeds.

It shows the antenna is not very sensitive and does not find and hold onto cell towers the way a good smartphone will. But then a tablet is more meant for ‘stationery’ in use.

Wi-Fi 4 (N) dual-band means its maximum speeds on the 2.4/5GHz bands are 65/150Mbps. This also reflects low antenna sensitivity. It is not bad, but you would want to be within 5 metres of the router to stream content.

BT is 4.2 supports single connections up to 50 metres. We tested to 20 metres before music streaming broke up. It has a standard SBC codec.

Alcatel claims a 4080 mAh (typical) battery and a charge time with a 5V/2A micro-USB charger of around 4 hours.

We ran a 720p video loop in aeroplane mode at 50% brightness and achieved as little over five hours screen-on use.

As a tablet, we expect more battery life but as a plugged-in, always-on, entertainment device with a separate Audio Station with its own 2000mAh battery (using a 5V/2A charger the charge takes about 4 hours) that is fine.

The 720p video loop increased to seven hours with the audio station.

The sensor is likely an ON Semiconductor MT9D015 1/5”, RGB Bayer sensor (or similar). The f/2.8 aperture means it is is fine for day or office lighting use.

Let’s just say you don’t buy this for the camera. Colour accuracy, picture noise, contrast and more are adequate for social media shots.

The tablet has two x 5W speakers and a maximum volume of 75dB. This is fine for personal use. At maximum volume, the sound is harsh and lacks any semblance of a recognisable listenable signature.

But the Audio Station is pretty good. It connects via BT 4.2 or POGO pins. BT volume is higher, but overall, the sound signature is similar, although a little more extended on POGO. It is a bright vocal which means bass tracks will be muddy, but overall it is quite pleasant for most music types.

The BT headphone test using the SBC codec was fine. Plenty of volume and little crosstalk.

The Audio station is a separate speaker, and the tablet sits on the eight POGO pins. There is no magnetic clamp. A fold-out arm on the rear stabilises it.

When you tap the tablet in this mode, there is a lot of front/rear movement so make sure you have it on a bench where it can’t tip over.

It is Pure Android 9 with security update as of 5 May 2019 (that is a little old). It should get two years of patches, and there is no promise of Android 10.

It also supports Face Unlock (not fingerprint) and all 32-bit Android apps.

OK Google show me your stuff

First, you need to install the Google Assistant app from the Play Store.

There are two huge differences between a dedicated Google Assistant screen and this device.

Here you have to activate Google Assistant manually – that means then pressing the mic icon on the screen – so it is not always listening. Now Alcatel state that the microphone is ‘+3m far-field’ but it kind of defeats the purpose if you have to press an icon first.

Its prime advantage over Google Assistant is that you can download any 32-bit app from the Play Store – Netflix, Stan etc.

Other than that, it performs all Google Assistant commands.

GadgetGuy’s take – The Alcatel 3T 10 is a lower cost 10” HD, Android 9 tablet with 4G capability and an Audio Station

And while we have poked and prodded the screen, CPU, throttling and sound, these tests are overkill on this style of . Yes, it’s a bit plastic, it wobbles on the audio station and the tablet inbuilt speakers are awful. But as a package, it is more than fit for purpose for teh rigth user.

What it is not is a replacement for a dedicated Google Nest Home Hub or Max or a Lenovo 8 or 10-inch Google Screen. It lacks the always-listening feature and the good voice/screen integration of these.

But as a tablet with an Audio Station and Google Assistant (and all that it does), it has a place in the smart home.