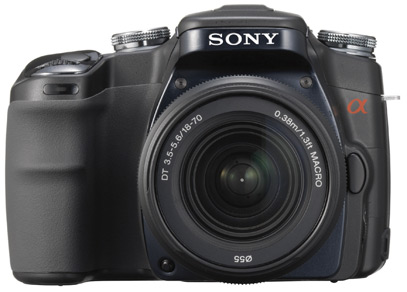 Here at VideoCamera magazine we don?t normally look in depth at digital still cameras, while still acknowledging still images are important. But we thought the release of Sony?s first digital SLR was worthy of a deeper look. Andy Rogers was entrusted with the task.

Around the close of 2005, one of the world?s most renowned imaging companies, Konica Minolta (KM), sent shockwaves through the industry by announcing that it was withdrawing itself from the camera market. Following the transference of some of KM?s imaging technologies to Sony, Sony has given to the world the alpha DSLR-A100. The important question now is: has the combination of Konica Minolta and Sony technologies made a camera worthy of challenging Nikon and Canon DSLR supremacy?

At first glance, one would be forgiven for thinking that the A100 shares more common ancestry with KM than with Sony. The A100 body strongly resembles the KM Dynax 5D, as does its interface. The more you use the A100 however, the more Sony?s influence shines through, manifesting itself in the form of improved build quality and styling.

In terms of features, the A100 has many reasons to gloat. Using the lower ISO settings (100, 200, 400), the 10.2 megapixel CCD produces images that are rich in detail and virtually noise free, especially when using RAW. Sony has utilised a two-pronged dust defence system for the CCD; a dust resistant coating on the sensor, and an anti-dust vibration mechanism that ?shakes? the sensor in order to clear it of dust.

The A100 has inherited the Dynax 5D?s image-stabilising ?anti-shake? system in the form of what Sony calls Super SteadyShot. Sony claims that it has improved the KM system, stating that enabling Super SteadyShot should give a 3.5 stop advantage. While lacking any precise, methodical way of testing this, I did observe quite a difference when shooting with Super SteadyShot enabled – perhaps 2 stops.

Another draw card for the A100 is its Dynamic Range Optimisation feature. Available on the camera in two flavours, standard and advanced, this system works to lighten areas in shadow and maintain image highlights. While during testing very little was gained from the ?standard? setting, I was rather impressed by the ?advanced? setting. On ?advanced?, the camera automatically chooses certain areas of the image that need adjusting (ie. light and dark areas) and adjusts them individually. The Dynamic Range Optimization feature does have its limitations however, as it is not available in manual exposure mode or when shooting in RAW or RAW+JPEG. Additionally, the ?advanced? setting can only be used on lower ISOs (400 and below).

For the most part, images produced by the A100 during testing were of a very high to exceptional quality; however it is worth noting that most of the images were taken during daylight conditions. Still, the A100 proved itself as an imaging tool through its excellent resolution and high levels of detail, as well as its vibrant, neutral colour reproduction.

I have heard that other reviewers have occasionally had problems with underexposure when shooting in multi-metering mode. While I can neither confirm nor deny the presence of such a problem in the A100, I can say that none of the 500 or so images I took during testing fell victim to such a fault. In fact, it was quite the opposite, with 6 or 7 of the 500 shots being considerably overexposed; a fact which may, however, be attributed to user error rather than camera deficiency.

There can be no doubt that the A100 is a highly capable machine. It is a compact, well-built DSLR with a comprehensive feature set for its price. The similarities between the A100 and its KM ancestors are by no stretch a bad thing, and they should help existing KM users feel comfortable with the A100. It is also nice to know that Sony has not gone down the DSLR road half-heartedly; the company has announced no fewer than 19 lenses for the A100, as well as a fairly exhaustive range of accessories (such as flashes).

So, in answer to the question posed at the beginning of this review, is the A100 a worthy challenger to Nikon and Canon DSLR supremacy? The answer would most surely be yes.