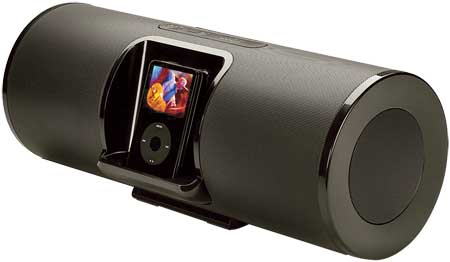 Not every iPod owner is a teenager, and seemingly that’s something that Altec Lansing’s IM7 seems to realise; it’s much more like a 1980s boombox than a portable music system. It can go portable, with yet another back to the ’80s touch – you’ll need four D-Cell batteries to make it happen.

And as if it weren’t pushing the ’80s metaphor enough, the IM7 takes the unusual approach of ‘loading’ the iPod into the speaker body, in the cassette fashion. This is a model that’s better suited to owners of older iPods; it comes with cradles for the iPod mini and third-generation models, and while we were able to fit an iPod Touch into the IM7, it wouldn’t actually close the cassette ‘lid’ when we did so.

While it supports S-Video for video output (again, best with older iPod models – some newer iPods may baulk at this connection method), the IM7’s appeal is in its simplicity, with a remote that covers only play/pause, track skipping and volume, bass and treble control. This can be annoying if you do want to do a lot of menu selections, as you’ll have to defer back to the iPod, but it’s great if you’re a big playlists user.

In our testing, the IM7 worked best with bass-heavy music, to the exclusion of much else. As such, it’s not the most dynamic and multi-purpose dock out there, but if you like your tunes on the loud and thumpy side – and especially if you own an older iPod – then it’s an OK buy.