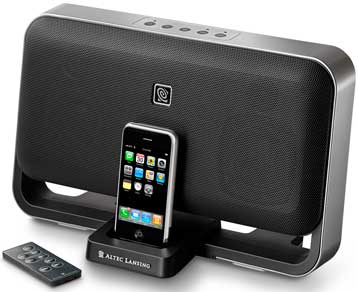 It’s clear from just looking at the T612 that it’s an iPod speaker dock; the iPod or iPhone sits at the front of a bulky speaker array that’s topped with control buttons. It’s a design that Altec Lansing has used before with success in the form of the M602 dock, and from an aesthetic perspective it does a good job of showing off your iPod or iPhone.

Still, an iPod dock is hardly earth shattering stuff in these times, and as such any dock has to go a little further to excite us, especially when you’re asking just shy of 400 bucks for it. Where the T612 earns its money is if you plug an iPhone 3G into it. On the basic side, it’ll dim the audio when an incoming call comes in, which is a nice semi-handsfree operation (you’ll still need to actually press the screen to answer calls, though), but it’s at a technical level that the T612 actually impresses.

Lots of people (us included) were wowed by the iPhone 3G when it launched, but that instant appeal was somewhat dimmed when existing iPod owners worked out that a lot of accessories, despite wearing a ‘designed for iPod’ badge on them, wouldn’t quite work properly with the iPhone.

Two problems reared up. Firstly, the iPhone 3G uses only the USB-based pins for charging, and this meant that older chargers (which used Firewire pins, not that consumers would know this) wouldn’t charge the unit. The T612 solves that, as it uses the USB pins, which are slower to charge than Firewire – but at least work.

The second problem is one that’s endemic to mobile phones and speakers – electromagnetic interference. When the iPhone 3G is plugged into most iPod Speaker docks, it’ll suggest switching to Flight Mode – switching off the phone parts – to reduce interference. If you’ve ever placed a phone down near poorly shielded speakers and then had it roam for a mobile tower, you’ll be familiar with this. Altec Lansing promotes the fact that the T612 has been designed with the iPhone 3G in mind, and are shielded appropriately.

The key factor that you want out of an iPod/iPhone dock is sound quality, and while the T612 can manage that old hi-fi store trick of being very loud, it does so at the cost of audio quality. Simply put, if you pop this unit up to top volume, you’ll hit a very solid wall of sound distortion. At lower and mid-range volumes, it’s quite acceptable – we could see it fitting very nicely onto a work desk, for example.

We’ll credit the T612 with this; it’s very easy to set up and use, and not once did we hit a problem with charging or interference from incoming calls. As such, iPhone 3G owners have a very solid option on their hands, although we suspect the T612 won’t be alone on store shelves for terribly long.

Put simply, the T612 is of interest to iPhone 3G owners only, or those who plan on becoming iPhone owners. It will work with other iPods, but at an asking price of $399 it’s a somewhat rich option unless you need the shielding it offers.