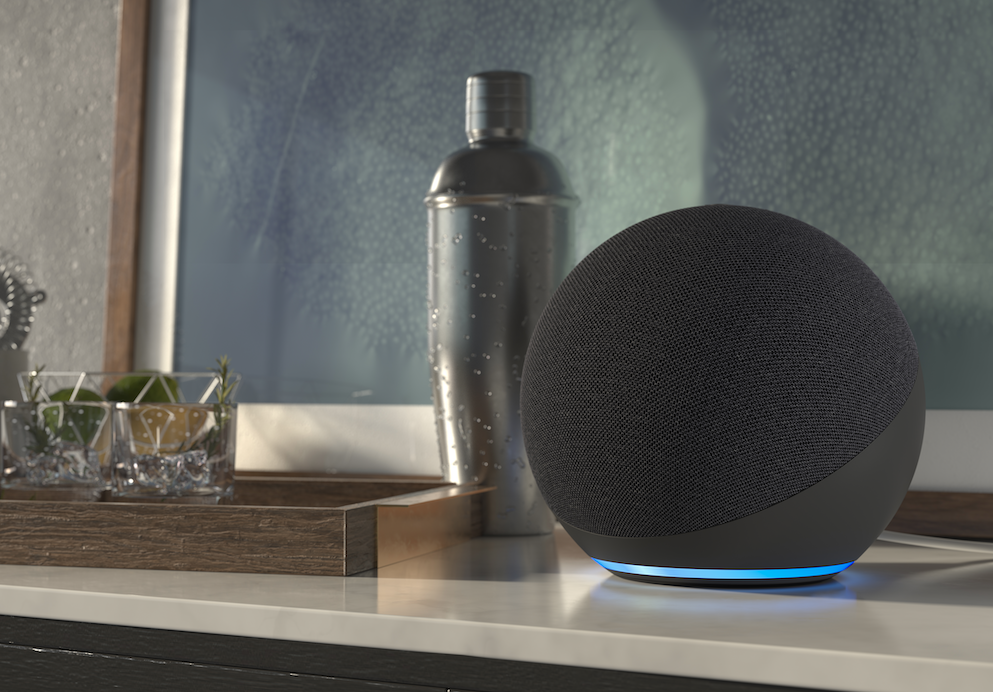 The new-look spherical Amazon Echo (4th Gen) smart speaker stands out in a line up. It’s a well-rounded speaker, but it still falls a little flat in places.

While its rivals stick with a handful of smart speakers and screens, Amazon has a wide range of smart gadgets to suit every room in the house. The Amazon Echo (4th Gen) sits squarely in the middle of the range. It’s too small to tuck out of sight like the Echo Dot, but not big enough to really rock the house like the Echo Studio.

At $149, the Amazon Echo (4th Gen) matches the budget-friendly price of its closest rivals in Google’s Nest Audio and Apple’s HomePod mini.

In terms of design, the Amazon Echo (4th Gen) smart speaker is a significant departure from its tall and slender predecessors.

The new round look means that it takes up more space on your kitchen bench than the Amazon Echo (3rd Gen), as well as its rivals from Google and Apple. The narrower AC power adapter is a welcome change for those who begrudge devices that rudely block adjacent power points.

Despite the spherical design, it is not a 360° speaker, rather an up-and-front-firing one. This means you do not get omnidirectional sound, so you need to place the speaker with care. The tripod thread on the bottom gives you extra mounting options.

The spherical design also stands out a lot more from across the room, not helped by the awkward-looking physical volume, wake and mute buttons on the top.

The Amazon Echo (4th Gen) is available in three colours – Charcoal, Glacier White and Twilight Blue – to help it match your living space. Even so, the speaker’s overall aesthetics are unlikely to please those who feel that smart speakers should be heard but not seen.

The woofer fires upwards, while the two tweeters face forward and out on an angle. Meanwhile, the six microphone array listens out for the “Alexa” wake word. You can change this to “Amazon”, “Computer” or “Echo”.

The microphones also let the speaker automatically measure the acoustics of the room and adjust the sound accordingly.

Setting up the Amazon Echo (4th Gen) is very straight forward if you already have the Amazon Alexa app on your iOS/Android smartphone or tablet. Simply go to the Devices tab and tap the + symbol to add a new device.

Follow the steps to discover the nearby speaker, grant it access to your Wi-Fi network and then allocate it to a room in your home. There’s also the option to create a stereo pair and/or add a subwoofer for extra low end.

The speaker also supports voice matching. This allows it to identify the different people in your home to offer personalised answers to queries.

Unlike some rival speakers, you can also take advantage of Bluetooth and a 3.5 mm audio jack. You can pair devices like a smartphone to the speaker for streaming music to it over Bluetooth. Alternatively, you can pair the Echo to a different speaker, while still using the mic to talk to Alexa.

You can also configure the 3.5 mm audio jack as a line out or line in, for sending music to or from other devices.

When you’re throwing a party, the Echo ecosystem supports multi-room audio with the ability to group speakers.

Keep in mind, Amazon’s ecosystem lacks an equivalent to Google Chromecast and Apple AirPlay for streaming audio directly from apps on other devices. This might not be a deal-breaker, considering the speaker supports Bluetooth streaming.

Like all Amazon smart speakers, the Amazon Echo (4th Gen) is designed to bring Alexa to life in your home. She can cue up music, answer your queries, check your calendar and control your other smart home gear.

When it comes to physical buttons, the lack of a pause button is frustrating. The fact the buttons are slight off- centred from front to back makes them look even more out of place. Perhaps it’s time for Amazon to embrace touch-sensitive buttons which fade from view when not in use.

While Alexa has come a long way in Australia, she’s still not quite as useful as Google Assistant when it comes to accessing third-party services like ride-sharing and food deliveries. On the flip side, you can ask Alexa to order items directly from Amazon.

Rivals could still learn a few neat tricks from Alexa. For example, if you whisper a query she whispers her reply – a brilliant feature if you’re sick of your smart speaker shouting late at night to wake the entire household.

There’s also the ability to call other Echo speakers, not just around your home but also at a friend’s house.

Ask Alexa for some music and the Amazon Echo (4th Gen) makes a good first impression. Listen more closely and you might be underwhelmed.

The speaker has plenty of low end, offering a significant improvement on the Amazon Echo (3rd Gen). Unfortunately, this extra bass leaves the music sounding a little dull and muffled. The sound isn’t quite as rich and well-rounded as some rivals in this price range. This is frustrating if you’re into more nuanced music which doesn’t rely on thumping bass and drums.

At first I thought this might be the Stereo Spatial Enhancement feature which Amazon annoyingly enables by default on the Echo Studio, but this speaker doesn’t support it.

It’s important to note that the Amazon Echo (4th Gen) uses its onboard microphones to automatically calibrate itself to the room, making measuring the output challenging.

Put the speaker in a wide open space and it dials up the bass to fill the room, producing slightly muffled and unbalanced sound if you’re near the speaker. Place it with its back to a wall and it dials down the bass to produce more even sound, certainly an improvement but still not the best in its class.

The two 20 mm tweeters leave the 76.2 mm woofer free to pump out plenty of high-bass and low-mid, although the music starts to become harsh and distorts at around 90% volume.

There’s a bass/ mid/ treble equaliser in the Alexa app which lets you tweak the sound slightly. You can read more about sound signatures here, but by default the speaker is bass-heavy and a little dull, which doesn’t favour vocals and strings.

Remember, the audio characteristics are also affected by the auto-tuning, which is influenced by the acoustics of the room and how close you place the speaker to a wall.

The Alexa light ring on the bottom of the speaker glows blue when Amazon’s smart assistant is listening after you get Alexa’s attention. If you want her to keep listening for follow-up queries without the need to say the wake word again, you need to enable Follow-Up Mode in the Alexa app.

For those times when you want some more privacy, you can press the physical mute button which turns the light ring red.

Take care when enabling the “Drop In” feature under Communications. It allows the speaker to automatically answer incoming calls from select family and friends.

If you’re a fan of Alexa, there’s a lot to like about the Amazon Echo (4th Gen). Especially if you’d take advantage of those Bluetooth and line in/out connections. And if you don’t care about the lack of a Chromecast/AirPlay equivalent.

The ability to control Zigbee-compatible devices directly, rather than relying on a Zigbee hub, will also go down well in some homes.

It’s just a shame that the slightly bulky design isn’t well-suited to tucking your smart speaker out of the way. If you’ve got an ear for quality and prefer more nuanced music, you’ll also lament the slightly-bass heavy sound – especially when the speaker is out in the open. To my ears, it doesn’t quite make the grade compared to rivals with a similar price tag.

Only if I was already pledged to the Alexa ecosystem and I wasn’t super fussy about sound quality.

Australian’s appear to have embraced Google Assistant and depending on your statistics source it now has somewhere between 70-85% of the market, Alexa 20-25% and Siri at <10%.

Google Assistant has opted for the more ‘open source’ path and there is a large range of third-party speakers from JBL, Sonos, LG, Bose, Panasonic and many more. So the decision is not whether to buy this Alexa speaker – it is what ecosystem suits your needs. There is a good overview titled Google Assistant users do much more than Amazon Alexa that may clarify what the different ecosystems do.