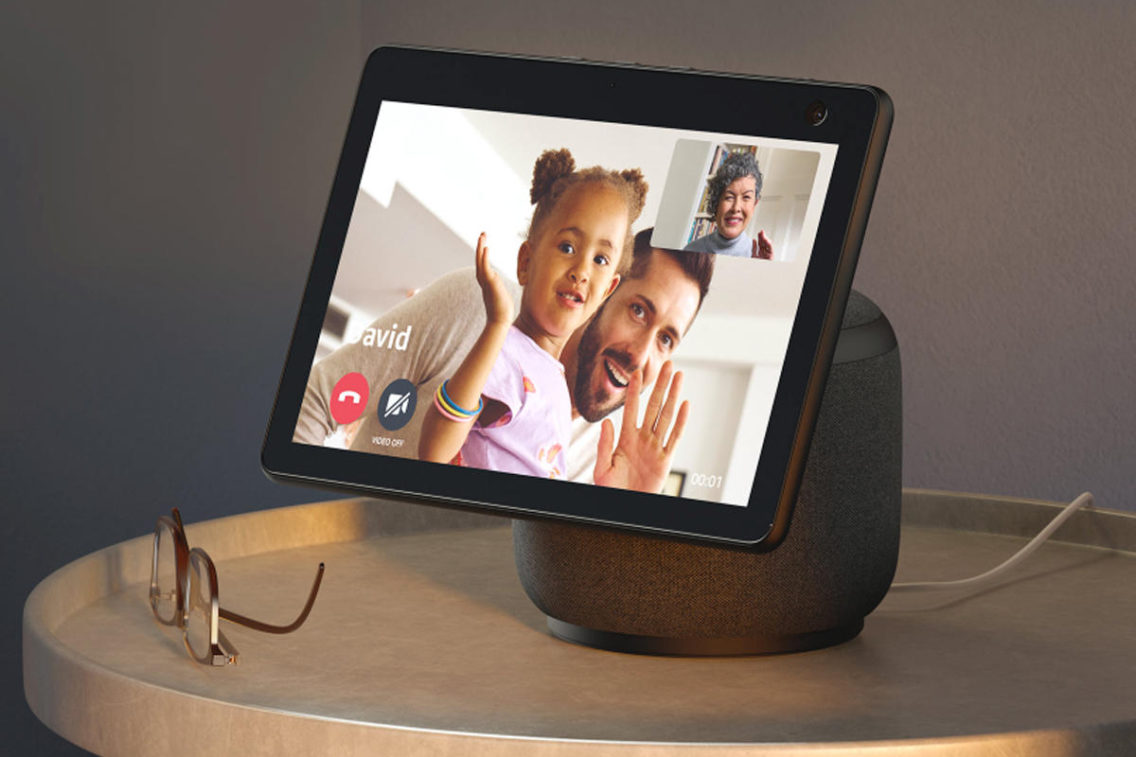 A smart screen that turns to follow you around the room, you’ll either think the Amazon Echo Show 10 (3rd Gen) is super cool or super creepy.

Smart screens are convenient when you want your smart assistant to be able to both show and tell. One frustration is that, depending on where you’re standing in the room, you can’t always see the screen.

Amazon’s solution is to take a cylindrical smart speaker and mount a 10-inch screen on the front, which can swivel 175 degrees left or right. Speak to Alexa, and the screen turns to face you. Move around the room, and it uses the camera to follow you.

Go to bed, and it creeps into the room to watch you sleep. Okay, that last point isn’t quite true, but the new Echo Show 10 (3rd Gen) might still sound like the stuff of nightmares to some people.

I was prepared for the worst, warning my family before setting up the Amazon Echo Show 10 (3rd Gen) on the kitchen bench to test.

Placing it on the bench which divides the kitchen from the dining area seemed like a logical choice. It’s one location where a standard smart screen is impractical because you need to choose whether it faces into one room or the other.

The first few times it turns to face you, it feels your smart screen is possessed. Before long, you grow accustomed to it.

Amazon’s straight-laced design in terms of size and shape means that you don’t tend to anthropomorphize (attribute human characteristics or behaviour to an object) the screen. If it had face-like characteristics or even an attentive tone in its voice when responding, it would seem more alive and thus more disconcerting. The way the screen slowly but steadily turns, occasionally struggling to find you, makes it feel a bit more dopey than creepy.

Unpack the speaker, and you’ll find a sheet of paper to place on the bench, showing you how much space you need to leave free, so the screen doesn’t crash into anything.

If you want to place the Amazon Echo Show 10 (3rd Gen) up against a wall or in a corner, the setup lets you configure how far the screen can turn in either direction. Of course, if you’re placing it in a corner, you probably don’t need the screen to turn very far.

Unfortunately, Amazon has discontinued the earlier Echo Show 10 models,, so this is your only choice if you want a large 10-inch smart screen. At $399, it’s considerably more expensive than the $229 8-inch Echo Show.

Even if you don’t care about a rotating screen, you might appreciate that the display sits 50 mm above the benchtop. This makes it easier to see from afar and reduces the likelihood of your view being blocked.

There’s the option to turn off the screen rotation, or temporarily disable it from the home screen’s pull-down menu. Dive into the settings and you can limit the tracking to specific activities, or only when you say “Alexa, follow me”.

You can also manually rotate the screen. It can also tilt back 45 degrees, but this isn’t motorised so it can’t follow your face as you move up and down. Even so, the ability to manually tilt the screen back is really handy when you’re up close and looking down. For example, standing at the bench while preparing a meal.

Thankfully the screen doesn’t follow you around the room constantly; that would seem far too creepy and intrusive. It remains dormant while displaying its home screen or scrolling through your photos. The screen only starts following you when it’s showing something it thinks you might want to see.

Say “Alexa, what’s the weather tomorrow” from anywhere in the room, and the screen turns to find the source of your voice. From here, it uses the front-facing camera to follow you as you move around the room. After a little while, the display reverts to the home screen, and it loses interest in following you around.

If two people stand in its field of view and move in different directions, the screen sometimes hesitates like a puppy called by two masters. Once again, it comes across as more dopey than ominous.

When it comes to entertainment, ask Alexa for music or video, and the screen follows you around the room as it plays. You’ve got access to Amazon Prime Video, Netflix and news bulletins, but frustratingly no YouTube (unless you launch the Silk or Firefox browser). When it comes to audio, you’ll find Amazon Music, Apple Music, Spotify, iHeartRadio and TuneIn.

If the screen loses sight of you, just say “Alexa”. It pauses whatever is playing, turns to face you and resumes the content after a few seconds.

Unfortunately, the Amazon Echo Show 10 (3rd Gen)’s sound quality is disappointing for a speaker of this size. It’s extremely bass-heavy, which makes voices sound muffled. This isn’t a flaw in the new design; the older Echo Show 10 models sound the same.

Following you around the room while only playing audio seems pointless, yet it persists. You can say “Alexa, go home” to go back to the home screen, where the audio keeps playing, but the screen stops following you.

Realistically, having the screen follow you while watching something on Netflix isn’t very practical. Even if you’re cooking and moving between the stove, pantry, and fridge, you’ll still need to occasionally take your eyes off the screen. If the content is so engaging that you can’t afford to miss a single second, maybe it can wait until you can give it your full attention.

It’s more practical if you’re watching Alexa step you through a recipe while moving around the kitchen.

This is when face tracking makes the most sense. Especially as the camera also subtly zooms in as you get further away from the screen

The Amazon Echo Show 10 (3rd Gen) can make or receive calls from other Echo devices or the Alexa app, either within your house or beyond. It also supports Skype and Zoom.

There’s a “Do Not Disturb” mode but, even so, things might get awkward if you enable “Drop-In”. This automatically answers incoming video calls from select family and friends, which sounds like a recipe for disaster.

When you’re on a video call, the screen tries its best to keep everyone in the shot by rotating and adjusting the zoom. As a general rule, if you’re in the shot and someone walks past, the camera stays with you. If you’re behind the camera, the screen won’t turn to follow the sound of your voice unless you say “Alexa”.

If everyone in the room confuses the tracking, you can tap the screen and select one face to follow.

You can also use the Amazon Echo Show 10 (3rd Gen) as a security camera, accessing it from afar using the Alexa app. When you do, “A household member is viewing your camera” appears on the screen alongside a stop button. There’s the option to add an announcement chime and blur the first few seconds of the video, but these really should be enabled by default.

When viewing the feed from the camera in your phone, you can pinch the screen to zoom in and out. You can also swipe left and right to physically move the screen and look around the room, although this feature is sluggish and temperamental.

You can also create Alexa routines triggered when someone enters the room or it has been vacant for a set amount of time. These aren’t yet available in Australia.

Speaking of temperamental, Amazon is clearly still ironing out a few kinks. The screen occasionally fails to move, and you’re told, “Motion is temporarily unavailable. If the issue persists, try restarting your device”. Even when it is behaving, it sometimes asks, “Did the device turn correctly?”

Alongside the volume buttons across the top of the screen, you’ll find a mute button. This disables the microphone and camera while displaying a red line across the bottom of the screen.

There’s also a physical slider to cover the camera lens. This disables the camera but not the microphone, so you can still talk to Alexa.

Amazon says all the tracking image processing is done on the device and is not sent to the cloud.

Once you get past the creepy factor, the Amazon Echo Show 10 (3rd Gen)’s rotating screen will make a lot of sense in some homes.

It all comes down to whether you’ve got the right spot in your living area and whether you’ll use it for tasks that make the most of the rotating screen. Remember, it’s costly compared to the slightly smaller Amazon Echo Show 8. Even then, it’s a shame about the audio quality. If you have an ear for quality, it won’t cut it as a music speaker for entertaining.

Assuming I was an Amazon-centric home, I was sure the rotating screen would be useful to me, and only if I had deep pockets.