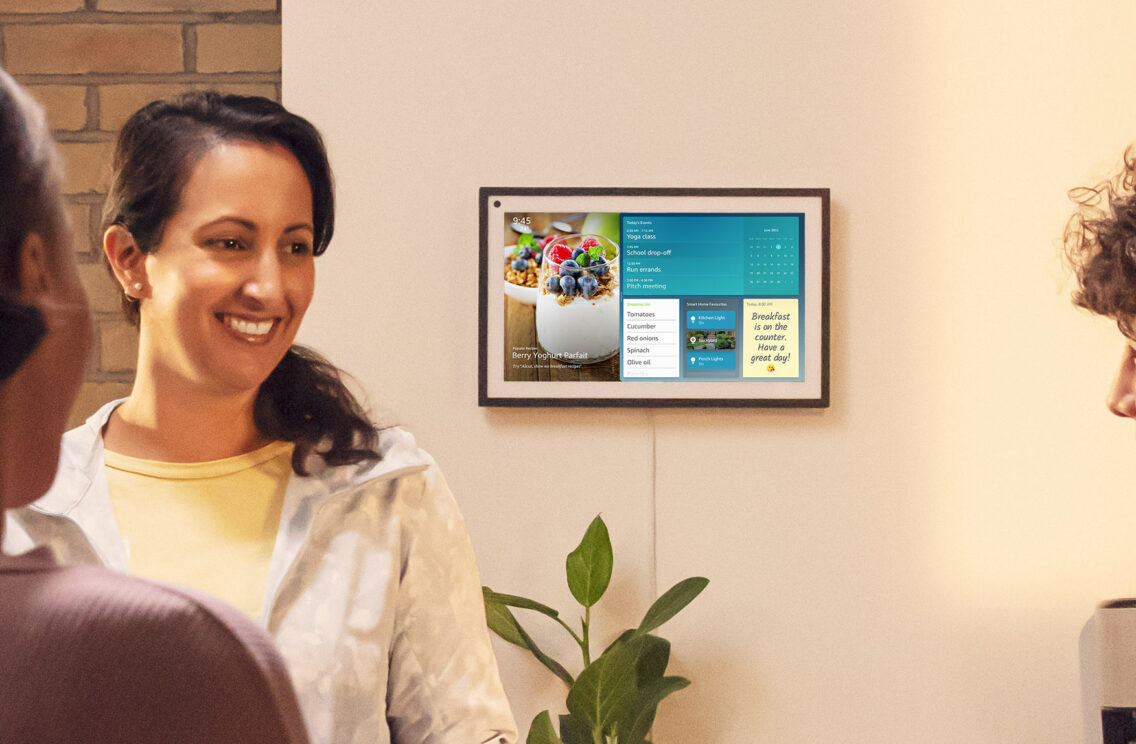 A smart screen designed to mount on the wall, the Amazon Echo Show 15 aims to keep your household organised.

Amazon’s Show screens bring the Alexa smart assistant to life, and the great thing about smart screens is that they can both show and tell. When you ask for today’s weather, Alexa speaks the answer aloud while showing you the week’s forecast. Ask her to add something to your shopping list and she’ll also show you the list – along with touchscreen shortcuts for quickly adding items like milk and bread.

The downside of a smart screen, compared to a smart speaker, is that it’s harder to find the perfect spot to place it, so it’s always in view – especially if the screen is small. Back when the first smart screens came to Australia, I wrote: “Don’t be surprised if the next generation of smart displays are designed to be wall-mounted, or even stuck on the front of your fridge, so they’re up high and facing into the room for all to see.”

That day has come with the Amazon Echo Show 15, which comes with a kit for mounting it in portrait or landscape mode. Wall-mounting saves on bench space, especially considering it sports a hefty 15.6-inch 1080p screen. Putting it up on the wall also ensures the screen is in a place where everyone can see it.

Keep in mind, the screen still needs to plug in a power socket using the provided 1.5-metre cable. If you don’t want to hang it on the wall, you can spend an extra $49.95 for a stand so the Show 15 can sit upright on a flat surface.

The Amazon Echo Show 15 looks like a rather elegant black picture frame, with a white matte around the glass. There’s no writing on the front, just a camera hole at the top left when it’s mounted in landscape mode. Like most Amazon smart devices, there are volume and microphone mute buttons along the top edge, along with a physical slider for disabling the camera.

At the rear, the square-shaped wall mount is designed so you can detach the screen, rotate it and reattach it without needing to adjust the mount. There are cable guides to keep the power cable in check.

As a central hub for your home, the Amazon Echo Show 15 probably makes the most sense in the kitchen. While it wouldn’t look out of place on the wall, it’s a bit thick and heavy to mount on your fridge door in an attempt to cobble together a smart fridge.

The Show 15’s large, sharp, bright display ensures that it’s easy to read the screen from across the room. It automatically adjusts the brightness according to the ambient light, dimming in a dark room so you can only see the time.

When it comes to smart devices, 15.6 inches is a lot of screen real estate. Amazon makes the most of it by offering you a selection of widgets including Photos, Calendars and Reminders, Music and Audio, Shopping List, Smart Home controls, Sticky Notes, To-do List and Weather.

Widgets are new for Echo Show devices, but should eventually come to other large-screen models. A small range of third-party widgets are available in the US for tasks like takeaway home delivery but, as usual with Amazon, Australians are expected to make do with less.

By default, the Home screen displays four widgets on the right-hand side. It’s easy to add, remove and rearrange the widgets, adding up to six to the Home screen. You can also opt for large versions of the calendar and music widgets.

Rather than ask Alexa, when you’re within arm’s reach you can simply tap on a widget to open it. You can also swipe in from the right to see more widgets, or swipe down from the top to call up the smart screen’s menus.

The left-hand side of the Home screen displays the current time, date and temperature, plus it rotates through a configurable range of content such as your photos, news, weather, recipes and Alexa tips. You can also swipe back and forth through these with your finger.

In most ways, the Amazon Echo Show 15 offers the same features as other Amazon smart screens with a built-in camera. You can see the view from smart cameras and doorbells, as well as send messages and make calls to other Alexa devices and the Alexa smartphone app (support for Zoom is coming).

While video calls are handy, you probably don’t want to stand around in front of the screen while you chat with people. Once again, this feature probably makes the most sense in the kitchen, so you can talk to someone while preparing a meal.

There’s a “Drop-In” mode which automatically answers incoming video calls from select family and friends, but to me this sounds like a recipe for disaster.

You naturally miss out on the face tracking offered by the somewhat creepy swivelling Amazon Echo Show 10, but surprisingly the Show 15 also lacks “auto-framing” – the ability to subtly zoom in on your face as you get further away from the screen. Presumably that’s because Amazon opted for a lowly 5 MP camera, rather than the 13 MP camera found in the Show 10.

The Show’s extra large screen is also handy for watching video, with access to Netflix, Amazon Prime Video, ABC iView and news from your choice of several sources. There’s no YouTube app, but if you ask Alexa for YouTube content she’ll open it in the Silk web browser. When it comes to audio, you’ll find Amazon Music, Apple Music, Spotify, iHeartRadio and TuneIn.

The Amazon Echo Show 15 is also handy for finding recipes on Taste.com.au. Alexa doesn’t just show you the recipe, she also takes you through it step-by-step, responding to voice and touchscreen commands.

If you’re going to engage with Alexa a lot, it’s probably worth enabling “Follow Up” mode so she keeps listening for a few seconds – meaning you don’t need to preface follow-up questions with “Alexa”. This makes talking to her a lot less tedious.

When dinner is ready, you can ask Alexa to broadcast a notification to all the Alexa devices in your home.

This is the first Echo Show to support Visual ID, as well as the existing Voice ID. This means you can create profiles for each member of your household, letting Alexa automatically recognise their voices and faces. In return, she can serve up personalised content such as recently played music, preferred new sources and upcoming calendar appointments.

Thankfully, you’ve the ability to access Google, Apple or Microsoft calendars, or you can use Alexa’s own calendar. You can also create a shared shopping list and to-do list, which is handy for keeping your household organised.

The Notes feature could be useful, assuming everyone in the house gets into the habit of glancing at the screen when they come home. You can dictate notes or type them on the screen, but not scribble with your finger. You only see the most recent note on the home screen, you need to ask Alexa if you want to see them all.

Unfortunately, the Amazon Echo Show 15 doesn’t display a personalised home screen when it recognises you. You can have sticky notes and reminders sent to a specific profile, so they only appear when the Show 15 recognises them.

Other handy features include easy access to smart home controls, letting you view your camera feeds, turn on lights and do other things with the tap of a finger, rather than asking Alexa.

The 1080p screen offers a bright, vivid picture which is great for a digital photo frame or for watching movies. It delivers decent picture quality, with wide viewing angles, although you might struggle a bit with glare in a brightly lit room.

You miss out on High Dynamic Range, but the contrast still does a decent job of revealing detail in dimly lit scenes.

When it comes to video calls, the picture quality on the other end is acceptable but not exceptional, thanks to that 5 MP camera.

While the Show 15 features a decent microphone, unfortunately the speaker sound quality suffers thanks to the discrete design which hides the speakers on the back at the sides. This provides an impressively wide soundstage when watching video, but the audio sounds a little flat and overblown. It suffers from the fact that the screen features two tweeters, but no woofer.

Placing the screen up against a flat surface like a wall helps boost the low end, making it louder but not richer. You certainly wouldn’t consider it a worthy replacement for a decent music speaker.

While Alexa is quick to respond to your queries and open apps, the homescreen gets a bit sluggish sometimes when automatically scrolling through content.

It’s great to see Amazon offering more options than Google and Apple when it comes to smart devices. The question is whether a smart screen hanging on the wall is a good fit for your home.

The two key use cases for the Amazon Echo Show 15 seem to be as a smart kitchen assistant and/or a family organiser. Of course, to make the most of it, you need to convince your family to use it – which probably involves changing the way they do things. If the smart screen seems to make their life harder rather than easier, they’ll likely to shun it.

If you’ve got a great use for it, and can get your household onboard, the Amazon Echo Show 15 could be a smart addition to your home.

Maybe, if I lived in a very Alexa-centric home, I had a good use for it and I knew the rest of my household would take advantage of it.