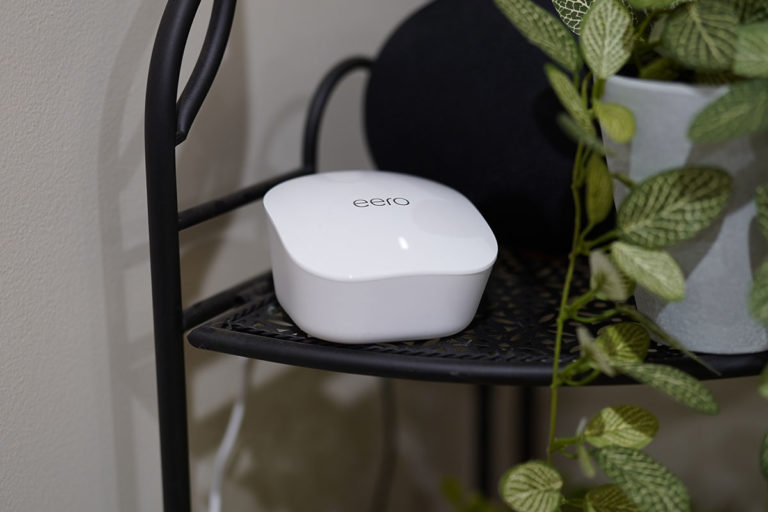 For years I’ve been hearing the word “eero” in advertisements on podcasts. Most of them have been US ones, but as of a month ago, the Eero Wifi System has become available in Australia. What is it?

Eero is a mesh Wi-Fi system. Each Eero unit acts as a Wi-Fi access point for the various devices in your home. But each unit also talks via Wi-Fi to any of the other units in the system. Between them, they intelligently route Wi-Fi traffic to the node which provides best connectivity to the device in question. That inter-unit communication is called “backhaul”.

What Eero promises on the box is “Simple, reliable wifi for any home.”

Let’s establish a proper expectation here. You can read all about mesh Wi-Fi here in the boss’ extensive writeup. He is properly cautionary about it. The fact is, you can get much higher performance than any mesh system by purchasing and establishing more traditional devices: Wi-Fi extenders and such. They can provide the “reliable” part of Eero’s formulation, but not necessarily the “simple” part. If you’re comfortable with fiddling with settings in network routers and other devices, and with laying Ethernet cable around the place, go for it.

But if you’re a regular person who doesn’t necessarily know what “DHCP” means, then Eero is a very easy way of placing reliable Wi-Fi throughout your home.

Eero is available as either a one-pack or a three-pack. It says that the single pack is good for a home of up to 140 square metres, while the triple pack is intended for homes of up to 460 square metres. That is one large home. The recommended Eero installation has one of the units plugged into your modem and then it (or all three) managing the whole network, allocating IP addresses and sharing a single SSID so that your devices can skip seamlessly from one to another.

I was supplied the 3-pack. The three eeros are identical. As you can see from the photos, each is shiny white, and a shape that’s hard to describe but not unpleasant to the eye. They can be tucked away somewhat out of sight because each eero is only 98mm on a side and 60mm tall. Each only has three hardware connections: two gigabit Ethernet ports and a USB Type-C connection for power. Each unit is supplied with a power adaptor and cable.

Typically you’ll plug two of them into power only, while the third will be connected to both power and an existing modem, gateway or router. You can use the Ethernet connection on any of the units for any network devices that don’t have built-in Wi-Fi. For example, you might have a PVR next to your TV that has network capabilities if plugged into your network system.

But you can also use the Ethernet connection for wired backhaul. Perhaps your home already has network cabling installed between two distant parts. Using wired backhaul relieves the Eero system of using Wi-Fi for the mesh, releasing it to be used to connect to devices instead.

What I wanted from Eero

My office is out the back of my home in a separate building. My FTTN Internet connection is to the office. I use a high-end D-Link Cobra modem/router in the office. The house is connected via Cat5e Ethernet cabling (I had it done quite a few years ago). Inside the house I typically use a repurposed D-Link DIR-882 AC2600 “EXO” MU-MIMO Wi-Fi Gigabit Router, reconfigured to bridge mode, to serve the Wi-Fi needs of the home. Sometimes I feel that it isn’t getting to the far reaches of the home quite as well as I would like.

Would the Eero 3-pack do better at that?

But I wanted to keep the Cobra running in the office and have three Eeros scattered throughout the home. Doable?

Absolutely, although I had to drill down into the settings a bit to put the Eero system into Bridge mode. That means it continues to do all its clever stuff in the areas where it’s operating, but leaves things like allocating IP addresses to the main router, in this case the Cobra.

There are two quite separate aspects to the Eero I want to look at. One was throughput in terms of performance, while the other was how hard would this be for your non-technical person to set up and use effectively.

So, first, performance. I went into this review with a methodology by which I planned to measure throughput. It seemed simple enough. I chose three different locations, two in the house and one outside, at which I’d set up a computer and, using the Wi-Fi connection, download a large (1GB+) video file from my NAS. (Actually, I used three identical files, each with a different name, to ensure that any buffers were purged during the copies.) I did it with my former setup and then with the Eero.

And the results were, well, I simply don’t know. With the computer in the loungeroom, which is perhaps a dozen metres and several walls away from the Wi-Fi, the download ran at 290Mbps. Which kind of put a lie to my worries about weak signals.

But Eero is designed to deliver around 300Mbps pretty much everywhere. When I switched over, it scored … 125Mbps. Oh.

The next spot was in a bedroom in which one of the Eero devices was located. The non-Eero speed was nearly 170Mbps, with Eero, 106Mbps. On my next-door neighbour’s letterbox out the front it was 87Mbps vs 78Mbps. Much closer.

The validity of real-world speed tests

Then I went into the study and ran the test with the computer right next to the Wi-Fi access point or Eero – these were wired to the router out in the office. Speed was 351Mbps with the DIR-882, and only 91Mbps with Eero.

That made no sense, since it was slower with the Eero than when the computer had been out in the loungeroom. How could it run at 91Mbps when connected to the Ethernet-connect Eero, yet at 125Mbps when there was at least one addition link in the path?

So I tested again the next day. Now, with the old system the loungeroom speed was under 100Mbps, down from 293Mbps. Having the computer in the study right next to the primary Eero had the speed at 264Mbps, up from 91Mbps.

At that point I concluded that this was a fool’s game. Clearly the throughput depended upon way too many things. Perhaps some firmware updates were being downloaded by various devices – I have a few dozen things plugged in most of the time. I suppose I could have powered down everything except the server with the test files and the relevant switches and other network gear. But that would be nothing like the real world.

What does the Eero deliver?

So, what speed did I need? If you are frequently shuffling gigabyte-length files between devices, then you have special needs which probably won’t be served by the Eero system. Horses for courses after all. But what you need is a speed of at least that of your Internet connection. In my case, that’s around 48Mbps. That I got everywhere. I could have taken the TV out front and put it on the neighbour’s letterbox and successfully streamed UltraHD Netflix – even in the pre-Covid times when it ran at 15Mbps.

Meanwhile, through the four weeks that I’ve been using the Eero system, everything has worked perfectly. All our “government surveillance devices” – as some podcast wag has termed Google Home and Alexa smart speakers – have been working with utter reliability. The Fitbit Aria 2 scales on which I observe my fluctuating weight are unsurprisingly placed on the floor. That results in slow connections. They’ve sped up considerably … on average. Again, everything depends on network activity and, seemingly, the alignment of the planets and movement of nearby wildlife.

And it depends on the decisions that the Eero system makes. In the Eero app you can control things, or just drill down and see what’s happening. For example, it shows which devices are connected to each of the Eero units. Since many network devices use far-from-clear names, you can’t always tell what’s what. But I did find that my Dyson Hot+Cool Link network-enabled fan heater, which was sitting right next to the bedroom Eero, was Wi-Fi connected to the distant study Eero. Weird.

And for the non-technical person?

And if you’re someone who’d like decent Wi-Fi in a large home, and certainly doesn’t want to delve into technical details?

Well, let’s look at the headline promises from Amazon’s page for the Eero:

Hey, if you love tweaking obscure settings in network routers, then why are you even reading this review? There is lots of wonderful gear out there that you can optimise to your heart’s content. But if you want a simple, cost-effective way of making sure fast-enough Wi-Fi is permeating every square centimetre of your home, check out the Eero. And if there’s still a dead spot, you can just add another Eero.

Features
Value for money
Performance
Ease of use
Design
Easy to install
Easy on the eye
Makes Wi-Fi reliable through large house
4.5