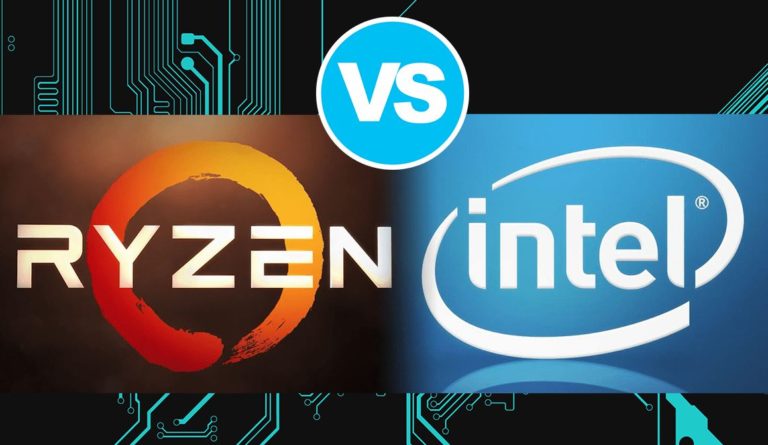 AMD and Intel differ so much in their approach to CPU design that trying to compare Ryzen Gen 3 to Intel Coffee Lake Gen 10 is a chalk and cheese endeavour.

While both want to dominate the x86 world, AMD and Intel are significantly different in concept and design – but there is room for both.

The critical difference that separates AMD and Intel processors today is that AMD uses a chiplet design, while Intel uses a monolithic approach.

But what do these terms even mean? And what do the differences between AMD and Intel really mean for you as a customer?

In Intel’s monolithic approach, everything about a processor – all its cores, cache, graphics, and I/O – is on a single die. With smaller processor designs–between 2-4 cores this is easy to do. Each die is relatively tiny, and you fit lots onto silicon wafers – leading to a relatively lower cost to manufacture a complete system on a chip.

Even if defect rates (yield) were to increase, wastage levels are low enough that Intel’s marginal cost of production isn’t hit. Every chip Intel builds–from dual-core Celerons right up to 28-core Xeon behemoths has its own die and design.

To be fair to Intel, it will move to a hybrid chiplet design if only to offer more options. In the example below it could use the same monolithic CPU core die and add custom I/O, Comms (e.g. 5G) and more making it a very flexible chip.

AMD’s chiplet design is the opposite. The fundamental unit of every Ryzen processor is the CCX, a four-core/eight-thread set of CPU cores. The CCX is a quad-core processor. Two CCXs pack together with L3 cache and I/O on a separate die to form a CCD.

And up to seven CCDs can stack together in a Ryzen Multi-Chip-Module (MCM). CCXs in a CCD communicate with each other, and other CCXs via the Infinity Fabric interconnect. Infinity Fabric binds the CCXs to the cache, I/O and interconnects different CCDs.

Monolithic vs Chiplet: What are the implications?

Secondly, Intel’s performance across cores is better due to a physics: a monolithic die has less of latency than connected chiplets.

While Infinity Fabric is very fast, there’s still a latency penalty as the CCDs are physically separated. Electrons can only travel so fast, according to Galileo.

With Ryzen Gen 1 and 2, the latency penalty had a noticeable performance impact, especially in games. However, AMD has significantly increased cache size up to 72 MB for the Ryzen 3900X. This, together with intelligent scheduling buffers tasks so that latency isn’t a big deal.

Why Ryzen’s hard to beat on price

Linear and Exponential Price scaling does it every time!

With Ryzen, the smallest CPU is a single CCD, with 2 CCXs, effectively an eight-core processor. How on earth do they sell quad-cores and Hexa-cores, then? This is where the real advantage of the chiplet design shows itself.

No matter how high silicon yields are, there’s always a defect rate. And on a newer process like the 7nm process, that defect rate can be 20% or even higher. Every core on a processor has a chance of being defective.

So, the more cores on a single die, the more likely it is that at least one core is defective.

In Intel’s monolithic die this means throwing out the whole CPU if even one core is defective. This causes Intel’s manufacturing cost scale to scale exponentially up with core count. An 8-core Intel part costs them far more than twice as much as a quad-core.

The anatomy of a Ryzen Gen 3: Salvage parts and core scaling

With Ryzen core count scales near-linearly with price. Since each Ryzen CPU is made up of CCXs (quad-core units), AMD just has to watch yields on that quad-core building block.

Wastage is far, far lower than for a monolithic eight-core or sixteen-core die. And even when individual CCXs have defects, AMD doesn’t throw them away. Instead, they disable one or more cores to help create cheaper SKUs.

For instance, the hexacore Ryzen 5 3600, a price-performance champion, has the same core layout as the pricier, octa-core Ryzen 7 3700. It has the faulty CCX disabled on each CCD, for a total of 6 cores. By utilising salvage parts and multi-chip scaling, AMD keeps prices low, even when core counts rise.

So, Intel uses large, single dies, while AMD makes use of multiple, smaller dies put together. It’s hard to understate how significant an impact this has had on the CPU market over the past two years.

Exactly how did Ryzen shake up the market?

Since Intel’s Sandy Bridge (2011) it has been content to sell mainstream quad-core CPUs with relatively high single-threaded performance.

With Ryzen Gen 1, AMD could offer more cores and more threads at every single price-point than Intel.

This was unprecedented: Intel’s i7s were quad-core eight-threads, and only its ultra-premium HEDT parts offered more than four cores.

Intel still managed to deliver better single-threaded performance, and for some time, its processors were still meaningfully better for gaming.

With no noticeable gaming advantage to Intel, buying Ryzen simply became a no-brainer. In  DIY markets like South Korea AMD has over 50% Ryzen market share – numbers AMD hasn’t hit in over a decade.

Starting with Coffee Lake, core counts increased. The i3 became four-cores while i5s offered six-cores, and so on.

Intel also cemented its overall performance dominance by adding another performance tier at the top-end, the premium i9 models – these were clocked high enough and offered enough cores and threads to keep even the fastest Ryzens at bay.

This gave Intel nominal performance superiority, even though you could probably count the number of Australian i9 buyers on one hand.

Intel has also been making noises about multi-chip designs: Foveros 3D stacking, which debuted with Ice Lake, allows them to deploy multi-chip modules with higher core counts, onboard memory and more. It’s Project Athena laptops are all about this.

AMD and Intel – the Chip war is good for customers

Competition is a great thing for customers. Intel no longer has a monopoly. It has to deploy its massive resources – an order of magnitude more than AMD – to deliver competitive products.

The years to come might not be the best for its shareholders, but customers will have no shortage of great CPU options.

GadgetGuy’s take – AMD and Intel – may the Core Wars continue

AMD and Intel are a little like the Qantas and Virgin air war – they fight over the 1% difference between 49 and 51% market share while mostly doing the same as each other.

Arjun has explained that while AMD and Intel do the same, e.g. x86 it is not the same under the surface. But does it matter?

Perhaps to gamers and high-performance computing but to Joe and Jane Average – no.

With the advent of Ryzen, notably Gen 3 (3, 5, and 7 series) and its low power U versions for laptops there is no stigma or downside in buying AMD for Windows-based PCs. But as my dad used to say, “It is easy to sell a cheaper product. It is much harder to sell a better one”. AMD cannot claim victory unless it is a better chip.

But Intel is serious in wanting to maintain its lead. Its 10th generation i3, i5 and i9 processors are spectacular and more affordable. You can read more here (skip to the end of this ITy Bytes article)