An idiot box in your pocket 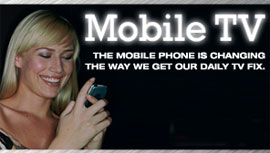 Mobile network providers are starting to show that their new 3G networks are about more than just video talk and fast Internet access. A new range of services that deliver live television to your mobile phone will change the way you get your daily TV fix, writes Nathan Taylor.

It was at the recent launch of its Next G network that Telstra signalled its serious intent to move into mobile television. In conjunction with the launch of its new network, it also announced a new deal to deliver 12 Foxtel channels to mobile phone users for a monthly subscription price of $12.

It wasn?t the first television-for-mobiles deal, although it is arguably the biggest. Hutchison?s ?3? has offered mobile phone TV services for some time, with per-channel pricing ranging from $3 to $7 per month. Hutchison also has the cricket contract, and many 3 subscribers will be no doubt watching the Ashes on their mobile phones this summer. Optus and Vodafone have yet to really get on the live mobile TV bandwagon, although they do both offer downloadable video clips, typically of the one-minute ?mobisode? variety.

Assuming you have to have a phone fit for the purpose, mobile television services are actually pretty good. Certainly the new NextG television services are quite nice, with decent picture quality and good sound. It?s not going to replace the lounge room television anytime soon, but from what we?ve seen so far, watching television on a mobile is a fair way to break the monotony of the morning train commute.

The thing is, to get any of these services you need a subscription to a 3G service, a 3G phone and you need to be in a 3G service area. With the launch of Telstra?s Next G network, that last is not too hard, since its 3G now covers some 96 percent of the population. Hutchison?s 3G coverage areas are rather more restricted.