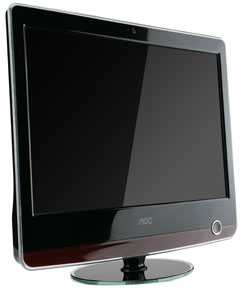 The Verfino series has a piano black finish that is framed in high gloss translucent duco and a touch of red. The base even goes beyond your plastic monitor stand, the Verfino series comes with a toughened glass resembling a wine glass base.

The Verfino V22 uses WLED technology. Compared to the normal LCD Monitors, WLED backlight displays are mercury free. Mercury free displays contribute to greener computing and fast becoming a requirement for environmental protection in many countries. WLED backlighting used in the Verfino V22 also boasts a reduction in power consumption of up to 20% making it ideal for homes and businesses who want to save on electricity bills as well as doing their part for the environment.

Adding to the Verfino’s green credentials is the lengths AOC has achieved to reduce wastage in packaging and shipping. The detachable base and the ultra-slim body can be packed into a mere 116 mm in thickness carton and is protected by 100% recycled pulp mold (similar materials used in egg cartons) instead of foam. The result is a more green and efficient shipping of AOC Verfino monitors worldwide.

The Verfino V22 comes with and HDMI input plus built-in speakers, allowing for high definition viewing and interconnectvitiy with HD devices such as Blu-ray, XBox 360 or PS3. The Verfino series also comes with built-in 1.3 megapixel webcam and a digital microphone.