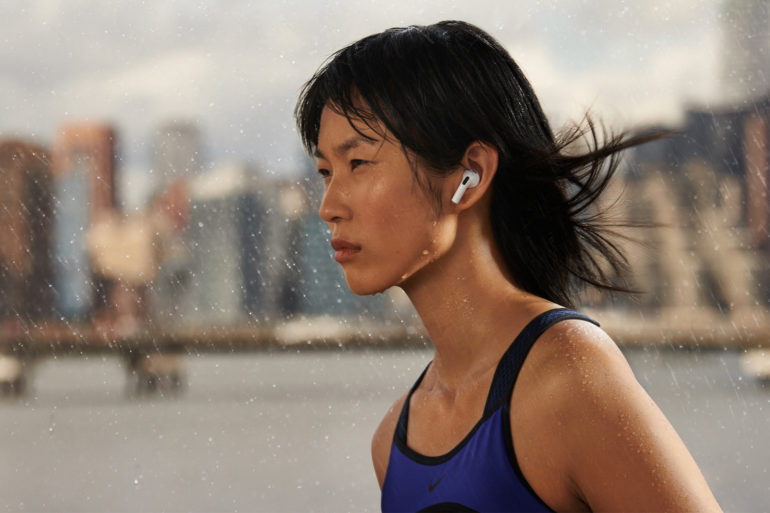 With an AirPods Pro-style design and extended battery life, the new Apple AirPods 3 are accompanied by a more affordable Apple Music service only accessible via Siri.

The long-awaited third-generation entry-level AirPods combine the power of the H1 chip with an Apple-designed acoustic system. This includes a custom-designed driver and amp, made just for the new AirPods. An inward-facing microphone enables computational audio, with Adaptive EQ to constantly monitor and optimise the sound.

While they lack the noise-cancelling found in the AirPods Pro and AirPods Pro Max, the Apple AirPods 3 (product page) can deliver spatial audio. This includes Dolby Atmos in Apple Music, movies and TV shows, along with dynamic head tracking which also works in Group FaceTime calls.

They also inherit the AirPods Pro’s force sensor for easy and intuitive control of music and phone calls. A new skin-detect sensor more accurately determines if AirPods are in the ear – as opposed to in a pocket or on a table – and pauses playback when removed.

The AirPods 3 offer the longest battery life of any AirPods at 6 hours (5 hours with spatial audio enabled). The case supports wireless MagSafe charging and provides four additional full charges for a total of 30 hours of playback. They are both water and sweat resistant, with an IPX4 rating for both the earbuds and the charging case.

The $279 AirPods (3rd generation) are available for pre-order, with availability in stores beginning October 26. They were unveiled along side the new Apple MacBook Pro line-up, featuring Apple’s new M1 Pro and M1 Max chips.

Meanwhile, the Apple HomePod mini is available in three new colours – yellow, orange and blue – as of November.

Ask and you shall receive

Alongside the AirPods 3, Apple also unveiled its new Apple Music Voice Plan, for $5.99 per month, which can only be accessed via Siri.

Users can request music across all of their Siri-enabled devices, including HomePod mini, AirPods, iPhone or any other Apple device, and when using CarPlay.

The Apple Music Voice Plan will be available later this spring in 17 countries and regions, including Australia.