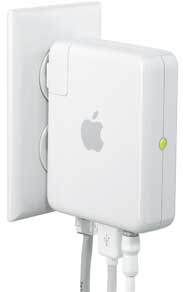 It can be plugged directly into the wall for wireless Internet connectivity and USB printing at home or easily brought on the road for wireless freedom wherever there is an Internet connection. AirPort Express features AirTunes, which works seamlessly with iTunes to give users a simple and inexpensive way to wirelessly stream iTunes music from a PC or Mac to any room in the house.

Apple now includes 802.11n as standard in its entire line of AirPort base stations and Mac notebooks as well as iMac, Apple TV and Time Capsule.