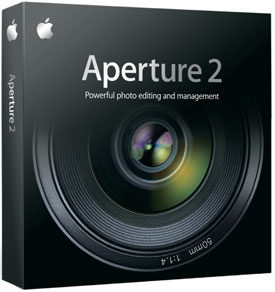 While Mac users still shooting with point and click digital cameras can do a lot with iPhoto already, Aperture takes your photography to a whole new level, especially if you’re shooting in RAW format on an SLR camera.

Apple’s iPhoto is very good for certain tasks – things like quickly organising your photo library for slideshow presentations, organising quick photo books through Apple’s online ordering service, and the like. What it’s not particularly flexible with is in the workflow of dealing with hundreds of photos, performing necessary and subtle photo tweaks, or splitting groups of photos into simple project groups. It has limited tools for many of those functions, but for those yearning for a bit more, there’s Aperture 2. It’s best described as a photo workflow tool, and while its focus is on professional users, it’s a simple and flexible enough package, backed up with an absolute ton of online tutorials that even semi-pro (or even timid newcomers) can adopt it with a surprising amount of ease.

It’s fair to say that the photographic community wasn’t exactly bowled over with Aperture’s first outing, and that’s something Apple seems to have taken to heart in Aperture 2. Aperture 2’s workflow has been considerably streamlined, and in its most basic form takes a three-panel approach to managing photo libraries, with separate tabs for project management, metadata editing and photo adjustments.

One nice feature here is that it’s a very simple task to apply changes to groups of photos, whether that’s adjustments to the photo properties, the metadata, or both. Importing photos is reasonably swift, but here we did hit one noticeable but understandable issue with Aperture 2; it’s not terribly quick on lower-spec and older Macs. We ran it side-by-side on 2GHz 1GB RAM Macbook and a 2.8GHz 2GB RAM iMac, and the older slower Macbook was much less responsive in dealing with large photo libraries.

If you’re an SLR owner pondering Aperture 2 and you’re not already shooting in RAW mode, start now. Aperture will perform adjustments on JPG files, but the extent to which it can tweak is severely limited compared to what it can do with even the dodgiest looking RAW file – you would be better off sticking to iPhoto, to be honest.

Where Aperture 2 really shines is when you’ve got large libraries of photos to quickly sort, correct and arrange. It’s simple to tag photos based on your own quality assessments, and then quickly sort out top-quality libraries of shots. The photo editing tools are both smart and subtle; while their relative complexity means we can’t mention them all, we will draw out the vibrancy tool (which lets you subtly adjust under-saturated colours) and the recovery tool, which allow you to quickly correct overexposed details in photos.

On the organisational front, Aperture 2 is likewise excellent, both in terms of being able to sort through shots quickly, and in the post-processing realm; it’s possible for example to create custom photo books, iPhoto-style with Aperture – but with a lot more control over how the finished product comes out.

There are a few minor catches to bear in mind with Aperture 2. It has support for tethered shooting – but not every camera is supported. The new interface is excellent for focusing on the photo in hand, but on smaller screens, like our test Macbook, it’s a little too small. Finally, it’s a real storage hog; aside from the pure file size of your RAW images, things like fast previews are saved as their own images, which can quickly blow out your hard drive space.

Aperture 2 in essence does what it says on the tin – photo management – at what is, in professional photographic software terms, a bit of a bargain. It won’t replace applications like Photoshop in pure picture tweaking terms, but for those moving beyond the digital box brownie stage, it’s a great tool, and pros who are after a speedy way to sort, catalogue and correct their libraries will find it useful too.