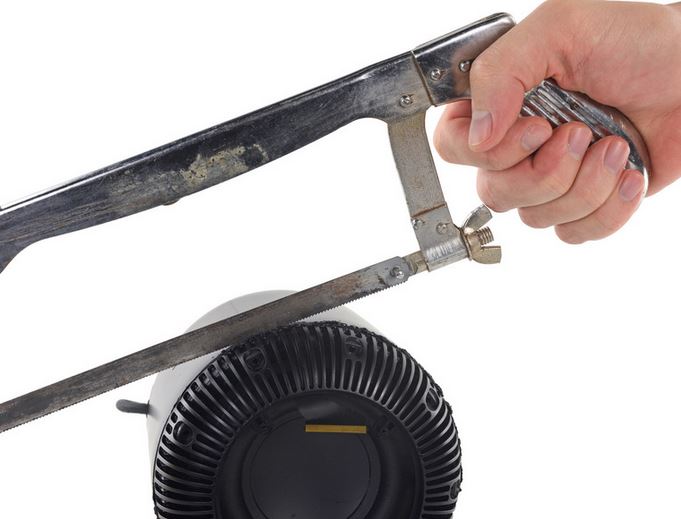 iFixit had to sacrifice its A$499 Apple HomePod to the gods of the hacksaw to get inside. While repairability is not the issue, the secret of how this small speaker produces bass performance has been uncovered.

The teardown  – as usual – is entertaining reading  in true iFixit sardonic style with the warning “This teardown is not a repair guide”.

Apple’s publicity machine has been busy telling us what it can do with its Apple A8 processor, 4″ upward-firing woofer, Beamforming seven-tweeter array, Beamforming six-microphone array, a low-frequency microphone for real-time woofer calibration, Top-mounted touch interface, Wi-Fi AC with MIMO and Bluetooth 5.0.

What it does not tell us is how many watts RMS, Total Harmonic Distortion, frequency response, dB rating etc. iFixit gains an insight into some of those issues.

Perhaps most surprising is that the special woven seamless acoustic mesh is more for show. Yes, it looks good and is acoustically transparent but the seven tweeters are down-firing at the base, and the woofer is up-firing at the top! Frankly, it could have been wrapped it in cling wrap – it would not have made any audiophilic difference.

iFixit identified seven discrete amplifier chips from Analog devices SSM35158 for the tweeters. Not unsurprisingly this code number is not listed – it appears to be a special build for Apple. The catalogue lists SSM3515 as a Class-D amplifier that provides 8.4W RMS at 8-OHM, 107 dB A-weighted with a 1% THD. This is a pretty respectable amplifier especially when you have seven of them.

The woofer is powered by an International Rectifier PowlRaudio 98-0431 audio amplifier. Again this is not listed but could be a version of the IR4311 that provides 35W @4-OHM.

The intelligence comes from the A8 APL1011 SoC as used in the Apple iPhone 6 with 1GB RAM and 16GB NAND flash. The majority of the RAM/storage would be used to store and execute the presumably iOS based operating system – not for music storage.

This would give the speaker around 100W RMS at 1%THD – pretty good for a small enclosure.

GadgetGuy is reviewing the HomePod for how it sounds – stay tuned.