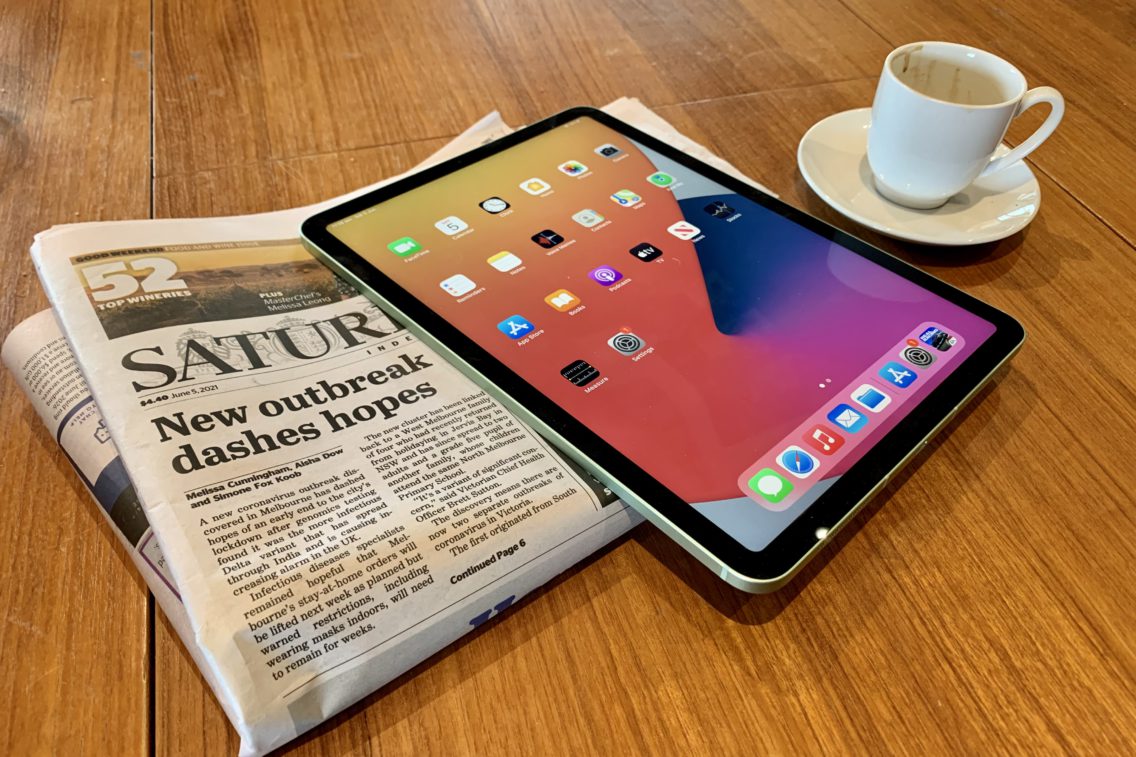 A new premium look and extra grunt under the bonnet leaves the Apple iPad Air (4th gen) feeling more like a stripped-down iPad Pro rather than a tricked-out standard iPad.

Apple abandoned its one-size-fits all approach to tablets long ago. This leaves shoppers spoilt for choice between three full-sized Apple tablets: the iPad, iPad Air and iPad Pro. Actually, make it four if you allow for the 11 and 12.9-inch iPad Pros. Okay, five if you count the pint-sized iPad mini.

The most striking change from the previous model is that the 2020 Apple iPad Air (4th gen) now looks strikingly like the iPad Pro. It has adopted the premium aluminium body of the Pro, while curbing the iPad’s curves to give it more of a spartan industrial design.

It feels great in your hands and certainly has more of a premium aesthetic which would look at home in the boardroom. This more professional look is offset by the fact the Air is available in four colours: space grey, rose gold, green and sky blue. So it’s formal, but here to party – trying to appeal to both ends of the market.

The new iPad Air has also ditched the physical button below the screen in favour of a Touch ID fingerprint reader in the power button. In return, the Air offers a slightly larger display at 10.9 inches. Even so, it’s a bit rich of Apple to describe it as an “all screen design” when it’s not an edge-to-edge display and retains a 10 mm bezel on all sides.

Despite the design changes, the Apple iPad Air (4th gen) is exactly the same size, shape and weight as its predecessor. Ditching the front button has seen the screen size bump up from 10.5 to 10.9 inches. That’s just a whisker short of the screen real estate available on an 11-inch iPad Pro.

Lots of other little changes have also brought the iPad Air closer to the Pro. The Lightning connector has been replaced with USB-C, which will suit some people and annoy others. The 3.5 mm headphone jack is gone, which again will be meet with mixed feelings.

When it comes to connectivity, the Apple iPad Air (4th gen) benefits from Wi-Fi 6 and, assuming you have a Cellular model, and faster LTE for when you’re out and about. You miss out on 5G, which has only come with this year’s iPad Pro.

The Air has also inherited the Pro’s 12MP rear camera, featuring ƒ/1.8 aperture. With this comes Smart HDR which blends a few images to improve the contrast in your shots. It does an excellent job in high contrast and low light conditions. Along with JPG, the tablet now supports the HEIF format, plus it can shoot video in 4k.

When it comes to productivity accessories, the iPad Air (3rd gen) already supported the Apple Pencil, Smart Keyboard and Magic Keyboard. The only change here is that the new Air model brings support for the Apple Pencil (2nd generation). The new Pencil does away with its Lightning connector, charging via a magnetic connection to the tablet.

Surprisingly, the iPad Air still relies on Touch ID, now built into the power button. Unlike the Pro, the new Air still doesn’t also support Face ID for unlocking the device using facial recognition – which is frustrating if you’re used to using it with your iPhone.

That said, using the fingerprint reader on the power button at the top soon becomes second nature. It responds quickly and is easier than reaching for a button at the bottom.

The screen and speaker configuration also remain the same as the previous iPad Air. It’s a liquid retina display with P3 Wide Colour Gamut, True Tone and an anti-reflective coating. Speakers at the top and bottom of the screen offer stereo sound when turning the tablet on its side to watch a movie.

All that combined makes for an excellent viewing experience. Fire up something like Lost in Space on Netflix and it takes advantage of Dolby Vision support to make the most of the bright, vivid display. Meanwhile, the speaker layout offers great stereo separation which helps bring the action scenes to life.

The Apple iPad Air (4th gen) steps up to the A14 Bionic chip, similar to the iPhone 12. It’s an improvement on the previous iPad Air, but still falls short of the new M1 chips in the iPad Pro range. Not that the A14 Bionic is a slouch, realistically it should handle anything your average user throws at it.

You’re unlikely to even notice the A14 Bionic’s extra grunt if you’re just surfing the web, using social media and checking your email. Of course, if that’s all you’d do with a tablet then the standard iPad should do you just fine.

The Air’s new processor shines through it when it comes to multimedia work and more demanding games. Opting for the Air makes sense if you spend more of your time in high-end graphics apps which take advantage of the Pencil, or advanced audio and video editing tools. Likewise, if you tend to make the most of Apple or Microsoft’s productivity suites and jump between apps. On the gaming front, high-end car racing games like Real Racing 3 handle silky smooth.

More than ever, the Apple iPad Air (4th gen) now feels and handles like an iPad Pro-lite. It hits such a sweet spot in terms of price, performance and features that it’s the iPad of choice for professional users looking for a tablet which holds its own for both work and play.

You’d really need to push your tablet to the limit to justify upgrading to the 11-inch iPad Pro just on performance alone. Multimedia doyens might punish the Pro’s M1 chip, but for other professionals the iPad Air is likely the pick of the iBunch.

Yes, if I regularly multitasked on my tablet and used demanding apps but didn’t need the iPad Pro’s firepower.