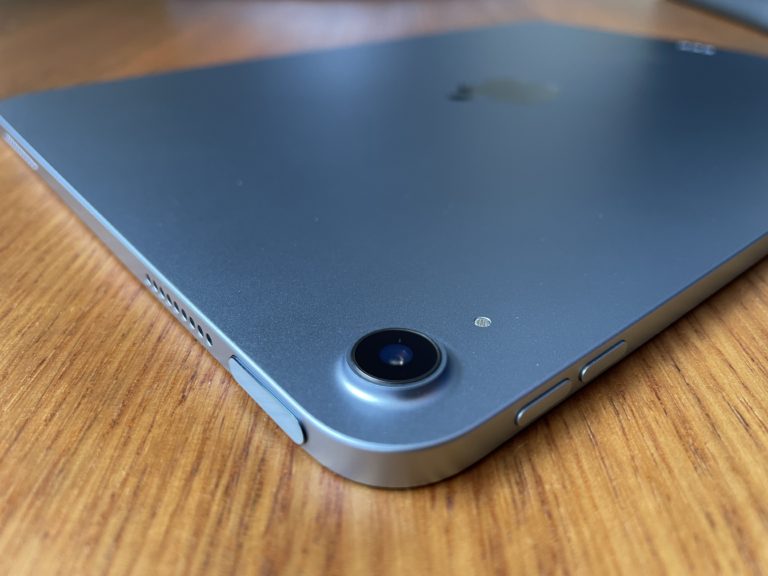 While the iPhone 12 may have grabbed the spotlight recently, Apple’s latest iPad Air 4th gen is now available. Apart from a refreshed look, it boasts improvements to its screen, cameras, connectivity and a new chip that places it tantalisingly close to the range-topping iPad Pro.

So has the new Apple iPad Air 4th gen stolen the iPad Pro’s thunder, only for less money?

First, a quick refresher on which iPads are available. The range consists of 4 models. Apart from the iPad Air 4th gen, there’s the iPad Pro (2 sizes), iPad (8th generation) and iPad Mini (5th generation). Here’s a handy summary of all iPad models.

The revamped iPad Air 4th gen dons the nouveau square-edged design found on the iPad Pro and iPhone 12. It now comes in five rather nice finishes too: there’s Space Gray, Silver, Rose Gold, Green and Sky Blue. We had the Sky Blue model for our review. All of the finishes are stylishly muted rather than overpowering. Blue, for example, is more silver with a hint of blue, which can change depending on the light.

As the Air is just 6.1mm thin and 460 grams, it’s quite comfortable to hold or tote around. This is thanks to its 100% aluminium body, which is carved from a single billet to add strength and rigidity. It can even be completely recycled into new aluminium things when the time comes.

Air gets an upsized 10.9″ ‘Liquid Retina’ display, which means more screen to look at than the 10.5″ version on its predecessor. However, by using thinner bezels and ditching the traditional ‘Home’ button, the dimensions are still about the same as the previous model.

It uses a backlit LE, IPS-LCD type, as OLED hasn’t made it to any of the iPads as of yet. Still, the new screen is extremely crisp and pin-sharp thanks to a 2360-by-1640 resolution with 264 pixels per inch.

The screen is also much better for showing colours, with Wide Colour (P3) and True Tone support. It can also pair with the Apple Pencil 2, which is much nicer to use.

Compared to the Liquid Retina screen on our reference 12.9″ iPad Pro, we found that the Air displayed a slightly warmer white but was about the same in brightness. Otherwise, the Air doesn’t get the iPad Pro’s luxurious ProMotion feature (a 120Hz screen that is noticeably smoother when scrolling web pages or design canvases). It can also play ultra-high frame rate videos and games – if you can find any.

The display gets both fingerprint-resistant and anti-reflective coatings. Apple claims the AR coating has the lowest reflectivity in the business, although neither will completely eliminate reflections or fingerprints.

A new fingerprint-sensing ‘Home’ button has undergone a complete redesign, thanks to being removed from the iPad’s front. The button/sensor is now located on the top outer edge and is now a rectangle, not a circle. You’d think that its shape and position would cause problems, however, the Air’s TouchID is one of the best. It unlocks incredibly quickly and doesn’t seem to care how you position your finger – lengthwise or widthwise.

Still, it’s odd that Apple didn’t switch to the FaceID (facial recognition) system found on the iPad Pro and iPhones instead of engineering a completely new sensor. We’d guess that the button must still be cheaper than the advanced cameras needed for Face ID, or otherwise, they wanted to leave this exclusively on the iPad Pros.

At its heart, the Air gets Apple’s latest chip from the new iPhone 12. The A14 Bionic is Apple’s “most advanced chip ever” and benefits from the latest 5-nanometre manufacturing process. This means that the chip is smaller, faster and draws less power. As a result, the 6-core CPU (computing) and 4-core GPU (graphics) are 40 and 30% more powerful than the previous iPad Air.

The A14 Bionic also has a next-gen 16-core Neural Engine with double the cores of the old design. It can handle 11 trillion operations per second with twice the machine learning (ML) performance.

While this all sounds very fancy, it enables a lot of behind the scenes capabilities for better app experiences. For example, machine learning can help identify your friend’s faces out of thousands of photos. It can recognise your Apple Pencil handwriting and seamlessly transform it into text. Or it can understand your voice and meaning when speaking to Siri.

Most importantly, this type of complex processing happens on the iPad itself. In the past, machine learning would need to be ‘off-device’ where the data would be sent to a more powerful cloud computer for processing and then wait for the results to be returned.

Air vs the Pro

As the iPad Pro has the older A12Z Bionic chip instead of the new A14 Bionic in the Air, we thought it would worthwhile comparing the two. Surprisingly, the iPad Air beat the iPad Pro in all but one multi-core test on our GeekBench5 Pro benchmarks.

The bottom line is that the new iPad Air 4th Gen gets a massive power bump, meaning it can handle very complex and processor-intensive tasks. This could be editing 4K videos, creating multi-layered and highly detailed designs and drawings, composing multi-track music or playing immersive, high-resolution games. The new A14 Bionic chip even pushes past the most powerful iPad to date, according to our benchmarks.

For snapping photos and shooting video, the Air gets improved front and rear cameras. The rear 12MP camera is now the same F1.8 standard lens unit from the iPad Pro. It’s designed for snaps, panoramas, time-lapses and filming Slo-mo videos up to 240 frames per second (fps) and 4K videos up to 60 fps. Other notable enhancements include digital image stabilisation and Smart High Dynamic Range (HDR) support.

The front-facing 7 megapixel ‘FaceTime HD’ camera now has an F2.2 aperture and can capture 1080P videos at 60 fps. It also comes with Retina Flash for brightening your selfies using the screen along with Auto image stabilisation and Smart HDR.

We compared the Air’s photo and video results with the iPad Pro’s cameras. Generally, the footage was quite similar in terms of colour, sharpness and noise reduction. The Air’s F1.8 camera produced noticeably less distortion (noise) in darker scenes than the iPad Pro’s wide lens. However, as expected, it matched the Pro’s identical F1.8 lens system.

The Pro’s cameras have a few extras including Portrait Mode photos and a LiDAR sensor, which is able to create a 3D map of the surrounding space. This also enables superior auto-focus speeds, especially in dark environments, and unmatched augmented reality scene-mapping.

The iPad’s shape and size make it a great device for watching videos. Films looked bright and sharp on the Liquid Retina display, and it also supports the Dolby Vision video standard.

There’s a new ‘Wide Stereo’ speaker system with the speakers placed on the right and left edges. When testing, we were able to discern a reasonable amount of Left/Right separation between each side. The audio was not excessively ‘tinny’ either and there was reasonable bass for a small device. Volume was surprisingly loud too and didn’t distort at high volumes.

The Air, thankfully, gets a fast USB-C connector and supports the latest Bluetooth 5.0 wireless standard. As you’ll probably be connected to the internet via Wi-Fi most of the time, the Air gets the new Wi-Fi 6 AX that can reach speeds of 1.2Gbps. Interestingly, we discovered that transfers on our office Wi-Fi were fastest on the Air when compared to the iPad Pro and even our iPhone 12 Pro.

Gigabit-class LTE is present for making calls and browsing the internet on Australian networks. While it’s not 5G, you should still be able to get up to 100Mbps DL speeds in metropolitan areas with a strong signal.

Lastly, for those who travel, it’s good to see both a standard SIM and eSIM included on the Wi-Fi + Cellular (LTE) models.

If you want to use the Air more like a laptop, it works with the Magic Keyboard. This protects both the front and back of the tablet and provides an illuminated keyboard and trackpad. The trackpad is especially useful because it adds a cursor-based interface to iPadOS, as well as swipe gestures and touch.

It’s worth noting that Microsoft Word, Excel, and PowerPoint apps are receiving updates to take full advantage of trackpad support in iPadOS so you can easily highlight a passage of text in Word, select a range of cells in Excel, and move and resize graphics in PowerPoint, etc. Here’s more on how how the new Office updates make working on iPad even easier.

The Magic Keyboard adds a second USB-C charging connector beneath the cantilevered stand, and shares power with the Air with the plug-less smart connectors. What’s it cost? An eye-watering $499.

For something a little slimmer and cheaper, you can choose the Smart Keyboard Folio ($269) with full-sized keyboard or Smart Folio ($119) without.

So how does the new iPad Air 4th Gen stack up? The Air’s new screen is great to look at and a comfortable size, there’s an attractive new design and 5 stylish colours, uprated cameras, Apple Pencil 2 support, faster Wi-Fi 6 and gigabit LTE, new speakers and more. But the star of the show has to be the new A14 Bionic chip, which all but beats out the iPad Pro’s ageing A12Z Bionic chip.

When compared to arguably the best non-Apple tablet on the market, the Samsung Galaxy Tab S7, the Air holds its own too. The 11″ Tab S7 model starts from $1,147 but does get a 120Hz LCD screen and a larger 128GB of memory.

All up, if you’re waiting to update your tablet, or maybe add a new device to your collection, the new Air is an excellent choice and priced to compete with the best out there.

Apple iPad Air (4th gen)
Impressive value for money given that it comes close to the more expensive iPad Pro in terms of performance. Great size and feel too.
Features
8.6
Value for money
9
Performance
10
Ease of Use
9
Design
9
Positives
Faster than an iPad Pro on our tests thanks to the new A14 Bionic chip.
Larger 10.9 inch screen with more colours (P3 gamut) than the old Air
Good value considering its performance and features on offer.
Negatives
A 128GB memory option would provide more choice
9.1