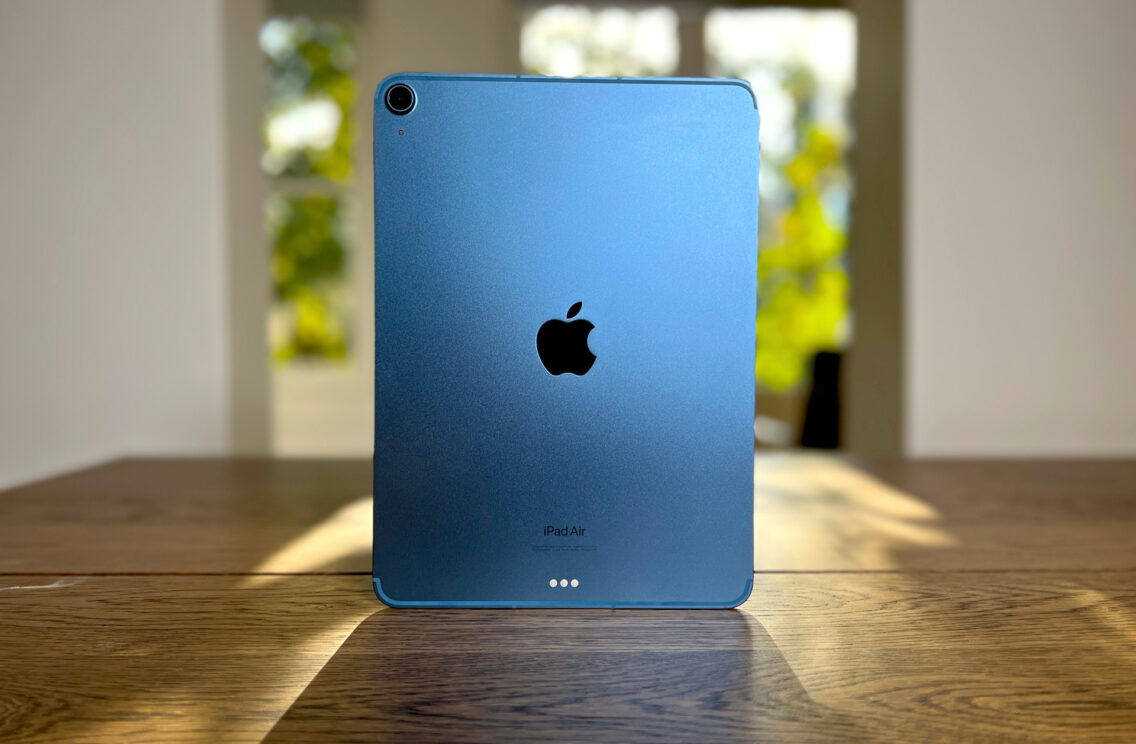 Let’s start with what makes this the 5th generation iPad Air so different than the model it replaces. Otherwise, you might be hard pressed to spot what’s new from the outside.

At it’s heart, the new iPad Air gets Apple’s M1 chip. This is the same high-powered, energy efficient processor that wowed the tech industry last year. It debuted in the MacBook Air and MacBook Pro laptops as well as the Mac Mini PC. Just recently, the M1 chip made its way into the top-of-the-line iPad Pro.

And since iPads have traditionally used the same or slightly more powerful versions of iPhone chips, it’s a big deal to see a full-blown computer chip in an iPad. The best part is that the iPad Air is $270 less than the iPad Pro, but gets exactly the same M1 chip.

Why is Apple’s M1 chip a big deal? In a nutshell, Apple decided to make its own ‘silicon’ rather than rely on the chips used in other computer brands. It started from the drawing board and was able to make a chip that was significantly more powerful, while using much less power. This is very important for mobile devices and laptops because poor battery life is a definite deal breaker. More about Apple’s M1 chip.

Given the Air’s price point of $929, the chip brings a whole lot more bang for your buck. Apple says that the new iPad Air has 60 percent more performance than the old model, with twice the speed of the fastest competitive tablet. The company also claims it is twice as fast as the best windows laptop in its price range.

Looking deeper into the M1 chip in the new Air, this has eight processing cores, four of which are for high performance, and four are efficiency cores. Compared to the A15 Bionic chip found in the iPhone 13 Pro, the M1 has two additional high-performance cores and three extra GPU cores. So, even though the A13 is newer, and is clocked at about the same frequency (3.2GHz), it’s not nearly as fast. Here’s a quick table of our findings using Geekbench, comparing the CPU (chip) performance:

It’s interesting that the iPad Pro is still a tad faster than the Air, even though they use the same chip.

As expected, there were no performance issues when multi-tasking or switching between applications. Apps launched quickly, scrolling and swiping felt smooth and responsive. We played Genshin Impact, which is a very graphics intensive game, and found moving the camera view to be very smooth with no frame dropping or studdering issues. Video editing was quick and snappy using iMovie when cutting together two 4K clips. Drawing with the Apple Pencil (version 2) also felt good. We used Adobe Fresco to test this out and didn’t experience any redraw lag when using complex brushes.

What it comes down to is that the Air can handle just about anything that you’d reasonably want to do on a tablet. While there is processing power to spare, the Air’s screen size and limitations of MacOS will probably keep you from realising the M1’s full power, such as doing 3D rendering or multi-layered animation.

In terms of battery life, we were seeing about 7 hours of charge time under heavy use including video playback, some gaming, emails, web browsing and sketching. Otherwise, it could go for a couple of days without needing a top up.

The iPad Air’s design hasn’t changed much from the previous model. It still has the same size and shape, with a 10.9 inch Liquid Retina display. While it would be nice to have a design refresh, there’s nothing particularly wrong with the Air’s look and feel. The new version is still light and thin, built from robust aluminium and has a fairly small bezel around the screen.

Some colour options are new, so you can go for the standard space grey or try out starlight, pink, purple and blue. We had the blue model for our review, and it’s particularly nice with a rich metallic hue and lovely matte finish on the edges and rear of the case.

With support for the Apple Pencil 2, there’s a spot along the top edge where the pencil will attach magnetically and can also be recharged. Pencil users will undoubtedly be happy that they can use the latest Apple pencil, as it’s much better than the original. Still, we wish there was a more permanent way to secure the pencil when toting the Air around, as the magnet isn’t that strong.

Speaking of accessories, since the iPad Air’s shape stays the same, it will still work with cases and keyboards for the old model. It also connect to new Magic Keyboards, Smart Keyboard Folios and Smart Folio cases.

We used the Magic Keyboard, which has a trackpad, keyboard, front and rear cover. It’s a handy way to package up the Air and make it more laptop like. There’s an extra USB-C port on it too for recharging and connecting to peripherals. The keyboard action is comfortable and the hinge is solid and never flimsy. The Magic Keyboard does add weight and thickness however. Using the trackpad is fantastic, as it operates just like a MacBook trackpad, however, the 10.9 inch screen is a little cramped to really take advantage of iPadOS’s multi-tasking. The larger 12.9-inch iPad Pro would get you closer to a true laptop replacement.

The 10.9-inch Liquid Retina display is very sharp and clear with 264 pixels per inch and a 2360 x 1640 resolution. The screen includes True Tone and P3 wide Colour so it’s a good match for photo editors, artists and designers. It has an anti-reflective coating too, which we compared to the 2020 iPad Pro 12.9 in model, and they both reflected about the same amount of light when illuminated with a torch. The display also has a fingerprint-resistant oleophobic coating but we could still see fingerprints when the screen was switched off.

Given that the iPad Pro is more expensive, we weren’t surprised that the Air’s screen is the IPS-type and not the higher-end mini-LED. Mini-LED produces brighter colors and deeper blacks and is very nice to look at when watching movies.

Also, the Air’s screen doesn’t get the iPad Pro’s 120Hz ProMotion technology, which makes for buttery smooth scrolling as the image is redrawn 120 times per second. The Air’s is just 60Hz, but this is still completely fine for scrolling pages, drawing and playing games.

There are two new cameras on the 5th generation Air. On the front is a 12MP ultra-wide camera, with a f/2.4 aperture. The extra width is designed to work in tandem with Apple’s Centre Stage video conferencing feature. This allows the the camera to zoom in and centre on your face, or even zoom out to a wide view to include a number of people in the frame. It works quite well and is a bit of fun when using FaceTime or compatible apps, especially if you get up and start moving round the room. The camera will follow you around! Centre Stage is a feature that appears to be rolling out to many of Apple’s new products, so it’s good to have.

The rear camera is also a 12MP unit, only with a faster f/1.8 aperture. This is a wide, rather than ultra-wide lens and more versatile for all softs of photos. You can shoot 4K photos and panoramas or capture 4K video including slo-motion and time-lapses. There’s also digital stabilisation to smooth out footage captured on the move, however, it’s not the more effective OIS stabilisation found in the iPhone 13 Pro.

Overall, the photos we took looked decent, with realistic colour accuracy, detail and low-noise in darker scenes. While you may not use the Air’s rear camera that much, it’s a solid update and the front-facing selfie camera will be great for video conferencing.

Another cost savings on the Air is that it uses a fingerprint scanner (TouchID) instead of the facial recognition (FaceID) system found on the iPad Pro. Still, it’s accurate enough to authorise ApplePay transactions, so there is a lot of tech going on behind the scenes. Just like on the latest iPad Mini, you place your finger on the rectangular ‘home’ button to unlock the device. This works quickly and accurately, although it can be a bit of pain to rotate the iPad to the correct orientation to scan your finger. You can store different fingerprints so you can unlock it with either hand, but it is a bit fiddly.

Sound wise, there are two stereo speakers, which are on opposite ends of the tablet. They are fairly loud for a tablet, and don’t distort when turned up to max volume. We tested them against the 4 speakers in the iPad Pro 12.9 while watching Gravity on Apple TV. This features Dolby Atmos, so we compared the ‘soundstage’ created by the speakers. On both models, you could get a slight sense of directional sound but the iPad Pro’s volume was higher, with fuller bass. Overall, the Air’s speakers should be find for movies, music, audiobooks and podcasts, but the Pro’s are louder and richer.

It’s good to see that the Air has some useful upgrades in terms of connecting to the internet and other devices. For mobile connectivity there’s now 5G, with both physical SIM and eSIM options. For around the home or office, there’s the latest Wi-Fi 6 (802.11ax) meaning you can connect to more than one Wi-Fi device simultaneously, along with faster data transfer speeds overall. Next, there’s Bluetooth 5.0 support, and finally, the USB-C connector is twice as as fast as the old model and can now transfer data at 10 gigabits per second. This is ideal for 5K and 6K monitors as well as fast data transfers to super speedy solid state hard disks, cameras and more.

The 5th generation iPad Air is the pick for people who want a capable tablet withtout the high-end price. The M1 chip delivers all the performance you could ask for, and there’s no one component that lets it down.

For $270 more, you could buy the 11-inch iPad Pro. While they share the same M1 chip, you get a higher-end camera system, LiDAR scanner, a better speaker configuration and silky-smooth 120Hz ProMotion display. You could even aunty up for the 12.9-inch model that has the gorgeous mini-LED display as well. However, unless you love movies or are an artist that needs the best screen and speaker setup you can get on a tablet, or an improved camera, there’s no need to look beyond the Air. With this in mind, the new iPad Air is the sweet spot of the pack, and definitely worth your money.

iPad Air (5th generation)
The 5th generation iPad Air is as powerful as you'd ever need it with Apple's M1 chip inside, plus it's $270 less than an iPad Pro, with similar performance.
Features
9
Value for money
8.5
Performance
10
Ease of use
9
Design
8.5
Positives
The Air gets Apple's powerful M1 chip, also found in the iPad Pro
Bright and sharp display with Apple Pencil 2 support
Improved 12MP cameras, front and back, with Centre Stage feature
Improved connectivity with 5G support, Wi-Fi 6 and a faster 0Gbps USB-C connector
Negatives
Same design & look and feel as the previous iPad Air
9