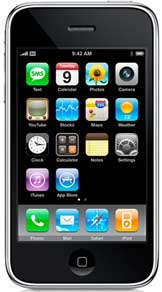 Apple’s 3G iPhone isn’t quite as revolutionary as the hype might have you believe. Indeed, an awful lot of what it does is replicated on any number of other phones. Where it absolutely leaves those phones in the dust is in ease of use, thanks to the slick interface, excellent embedded browser and ease of adding applications to the phone. It doesn’t hurt that it’s a phone that’s also genuinely fun to play with, either.

The iPhone 3G is Apple’s second shot at a combination iPod/Phone. The previous 2G iPhone was never “officially” available in Australia, although plenty of unlocked models made their way here via eBay. The 3G iPhone sports a 2.0 megapixel camera, inbuilt email, web browsing and a variety of web-centric features such as YouTube video playback, Google Maps and weather forecasts — in basic essence, it’s an iPod Touch with phone features built in. In terms of changes from the 2G iPhone, the most significant upgrades have been the inclusion of higher speed 3G, the addition of a GPS module and the integration of Microsoft Exchange compatibility, if convincing your boss that you must have an iPhone is part of your plan.

In the box, you’ll find the iPhone itself; it’s a little fatter than the 2G model (and much chunkier than the slimline iPod Touch), and it comes with a USB charger, connection cable, a cleaning cloth and a tuning fork style tab of metal that both keeps the manual folder together and acts as a mobile SIM removal tool. The 16GB model comes with either a white or black plastic back; our black model — like many piano black objects — was a solid finger smudge magnet, no matter how many times we polished it.

The most significant feature of the iPhone isn’t one that many tech types would think of as a feature — it’s the interface, and the way that the separate parts of the iPhone work together. While plenty of other phones offer the same things the iPhone does — browsing, GPS, music playback and the like — we’re yet to see a phone that converges them all together quite so smoothly.

There are also features that the iPhone surprisingly lacks, mostly to do with the camera. As a single camera phone, there’s no video calling capability, despite its 3G nature — you can’t even use it to capture low resolution video. It’s also not MMS capable, if that’s important to you. We were more concerned by the fact that the iPhone 3G doesn’t support A2DP Stereo Bluetooth, meaning you can’t use wireless stereo headphones. At least it uses a standard 3.5 mm jack, so you can use the wired headphones of your choice.

There’s essentially two parts to the iPhone experience. Firstly, as a phone, it’s largely like any other touchscreen model. It does benefit here from the larger display screen, which equates to larger and easier to hit buttons, as well as sensors that detect when you’ve got the phone up to your ear — so you don’t suddenly dial Uzbekistan accidentally when in the middle of a call.

The second part — and the real meat of the iPhone experience — comes from the variety and depth of its data-centric features. Naturally, it’s an iPod, with either 8 or 16GB of storage, depending on the model you choose. Users of the first generation 2G iPhone, or indeed the iPod Touch will be on familiar ground here; you’ve got the Safari browser for internet access, Mail, Maps and Contacts inbuilt, and it’s quite easy to transfer these details via iTunes.

At the current time, there’s nothing that can match Safari as a mobile browser; it’s fast to render, slick to use, and works so much more like a normal PC browser than any other phone based solution we’ve seen. If you’re in a 3G coverage area, the browser can work very swiftly indeed. The 3G version of Safari doesn’t currently support sites that use embedded Flash, something that will hopefully be rectified soon. It’s worth noting that we tested the phone within and without 3G access on the outskirts of Sydney on Vodafone and Optus’ 3G network. The iPhone does work on 2G networks, but it’s noticeably much slower, and those in rural areas may find Telstra’s Next-G network the best bet for faster non-metropolitan coverage.

Apple’s made quite a lot of noise about the embedded GPS in the iPhone 3G, but at launch it’s not the most enticing aspect. GPS lock-on is nice and quick, as it uses both mobile phone tower and even local WiFi towers to quickly get a feel for where you are, and then pin-points it once the GPS has a lock. The problem here is that it just uses Google Maps for navigation. This means it’s always chewing up data while navigating. For finding out where you are it’s fast and fine, but the Google Maps navigation lacks turn by turn navigation or speech, making it an impractical tool for in-car navigation, unless you’ve got a co-pilot handy to read out the screen for you.

Apple’s also offering up the tantalising prospect of an App Store (editor’s note – it’s open now – click the link to learn how to access the App Store) that will sell iPhone applications — we’ve seen everything from basic medical applications to Sega’s Super Monkey Ball. While the App Store wasn’t up and running at the time of review, the early reports from Apple indicate software prices in the rough US$10 price range, although developers will also be able to give away software if that’s their choice. For those who like the idea of phone-based GPS, hopefully a GPS application will launch sooner rather than later.

There is one catch to all of the iPhone 3G’s fun features, and that’s in the battery life. Apple states all of its battery figures with a magic “up to” limiter. In practical usage, when we were using the phone as both a 3G and WiFi data device, along with its iPod audio and video functionality, we could rather easily deflate the battery within a day. Switching to only 3G usage (and cutting back on the video playback) improved matters, and we averaged around 3 days in-between recharges. That’s pretty much in line with other heavy use 3G phones, and it’s certainly true that the addictive fun of just using the iPhone does add to the problem somewhat.

The other factor we’d advise caution on is data charges. All of the Australian carriers of the iPhone are selling data limited plans. It’s possible to track this usage (under Settings>General>Usage>Cellular), and we’d advise all iPhone users to keep a daily watch on this, if only to avoid excess data charges, especially as many of the plans on offer at launch are rather complicated, to put it mildly. As a very rough estimate, we went through around 145MB of data in just under two week’s worth of testing with the iPhone 3G — this included GPS (as the maps data streams from Google Maps), email and browsing.

The one fly in the iPhone 3G’s ointment, at least for Australian users, will continue to be the relatively high prices we pay for wireless data. If you can temper that — and bear in mind that at least Optus and Telstra are offering complimentary WiFi at their hotspots — and keep your data use under control, then the iPhone 3G is a highly appealing prospect as a premium 3G phone, as well as being a just plain fun phone to use — and there’s really precious few of those about.

A note on pricing

As ever with a mobile phone, the price you’ll really pay is dependent upon the plan you take. Much was made of Steve Jobs US $199 and $299 pricing statement made when he launched the iPhone 3G, and that the price in countries other than the US would be close to parity with these prices.

But, call and data prices were not entirely factored in – and there’s going to be a lot of activity from the carriers jostling to offer the best deal on this marquee device.