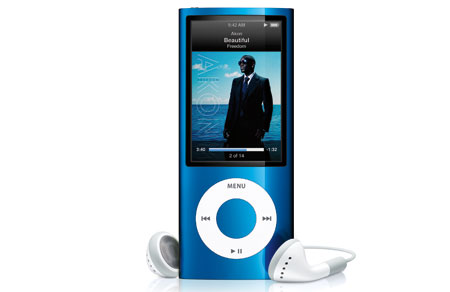 Apple’s thrown everything short of the kitchen sink at the fifth generation iPod Nano, with a raft of new features designed to get the iPod crazed public excited. While it’s still a great music player, the new features certainly aren’t enough to warrant an upgrade, and there are better value iPod models in our estimation.

At a basic level, the iPod Nano’s a music player. No great surprises there, and the capacities on offer haven’t changed, with 8GB and 16GB models available. Apple’s bumped the screen size up by 0.2 inches from the 4th Gen iPod Nano, although you’d have to really place both models side by side to genuinely pick that. Nine colours are on offer – although two of those are Apple Store only variants – so there’s plenty of fodder for the fashion crowd.

The new Nano will only work with iTunes 9, so you’ll need to upgrade or install it to get started. As with the most recent generations of iPods, this isn’t bundled in the box, and you’ll have to download it before you can do anything at all with your iPod Nano. New in iTunes 9 is the “Genius Mixes” feature, which gives you genre-based tune selections. Unlike the existing “Genius” feature, which required a track to be selected to build from, Genius Mixes will make up playlists for you.

The new Nano’s feature set isn’t exclusively music-centric, however. It’s also equipped with an inbuilt video camera, a Pedometer – with the ability to sync with an existing Nike+iPod account – FM radio tuner and inbuilt speaker. As we mentioned, Apple’s gone all out with the Nano in terms of features, at least on paper.

The Nano’s succeeded in the music market for much the same reason previous iPods have – a mix of savvy marketing and ease of use. None of that’s changed in a music sense with the new Nano at all.

It’s in the other features that the Nano comes off a little hit and miss. Take the Video Camera for example. The Nano’s video camera lacks stills capability, and unlike the 3.2 megapixel CCD on the iPhone 3G, the Nano’s camera is a pinhole VGA only model. It’s oddly situated behind the scroll wheel, which means you can’t use it in a vertical orientation. Hold it at the base, and you’re obscuring the screen which acts as your viewfinder. Even holding by the sides, compact camera style has its pitfalls, as you’ve got to be careful not to tap the inbuilt microphone while recording. Once you’ve got all that out of the way, the Nano’s camera only offers VGA-quality (640×480) H.264 recording, so quality isn’t that great. You do get some iChat-style “fun” video effects to overlay on it, and it’s better than having no camcorder to hand. It’s still a gimmick, though.

FM Radio suffers a similar fate. Some features, such as the ability to “pause” live radio for up to 15 minutes work well. Other features, such as the ability to “tag” radio tunes for later iTunes purchase simply didn’t in our tests. The problem appears to be that Australian radio stations aren’t transmitting the correct RDS (Radio Data System) information the Nano requires, but it leaves it as a feature that you’re not able to use. Like most mobile phones that include a radio receiver, you’ve got to have headphones plugged in – to form the antennae in effect – but annoyingly you cant do the same trick by popping the Nano into a dock.

The pedometer is one gimmick that does work – and you can set step counts – but as with any pedometer, placement is key if you’re going to correctly capture your step movements.

The inbuilt speaker, like most mobile devices that feature them, is great for annoying folks on public transport, but it’s incredibly tinny and highly susceptible to distortion with most music types.

We still love iPods as music players, and the Nano’s still great for that purpose. If you view the add-on features as the gimmicks they are, then they’re a fun distraction, but not a key selling feature per se.

The other catch with the Nano – and more specifically with the 16GB Nano – is that it’s a scant nineteen bucks cheaper than the 3rd Generation 8GB iPod Touch. While the 8GB model doesn’t have the new processor refinements of the 32 or 64GB models, it does bring the highly popular App store into view.

Meanwhile, Apple’s commitment to iPod-centric games has been pretty poor. You’d only get 8GB of onboard storage with the cheapest Touch, and no camera – but oodles of other functions and Apps open to you.

This review of Apple’s 5th Generation iPod Nano is of the 16GB version, and the price accompanying this review is for that model. The Nano is also available in an 8GB size, priced at $199.