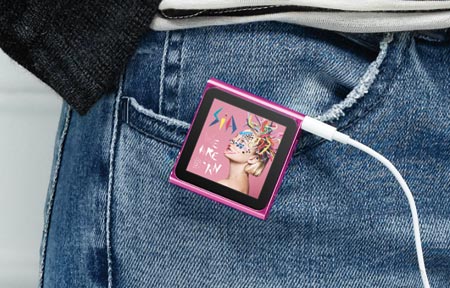 Apple’s next incarnation of the hugely successful iPod Nano has removed more features than it’s added. And that’s a good thing.

With the latest incarnation of the Nano, Apple has removed more features than it’s added.

The size is the most obvious reduction, with the sixth generation Nano now resembling the small clip-on rectangular iPod Shuffle from two years ago. Except that, at 37.5 x 40.9mm, it’s more square than rectangular, and at just under 1cm thick and 21.1 grams, it’s also one of Apple’s smallest and lightest devices ever.
Being so small, the Nano is no longer a device that can be easily gripped in the hand, as were previous iterations. Now, much like the iPod Shuffle, the Nano clips onto your clothing or nestles easily inside a pocket.
Despite the small size, Apple has kept the capacity the same. Customers can choose between the 8GB ($199) and 16GB ($229) versions in seven different colours.
Then there are the buttons. Or rather, there are not buttons, because Apple has forgone the click-wheel of older Nanos and replaced it with a 4cm (1.54 inch) square touchscreen. The operating system resembles a light version of the one found on the iPhone and iPod Touch, so people who have used those devices will be at home here.
Outside of this, video support has completely disappeared. Games have also been banished, and from what we can tell, it’s unlikely either you’ll be able to download any to the minuscule iPod. The rationale here is pretty clear: neither apps, games, or video really have any use on a screen the size of a postage stamp.
Most of your favourites control function from past iPod Nano devices remain though, including EQ, shake to shuffle, photo display, and support for the Nike+ pedometer.

The Nano’s small square touchscreen doesn’t take long to get used to at all. If you’ve ever used an iPhone or iPod Touch, the layout will make sense and you’ll find poking at icons or swiping from screen to screen as fluid as ever. Icons for information and picking favourites are a little smaller than you may otherwise be used to, but they’re still easy to discern.
Swiping from left to right will take you back a screen, the movement very much like clearing away branches of a tree. It’s a simple gesture that works brilliantly.
Navigating through music playlists and podcasts is very similar to how it’s done on a Touch or iPhone, except the interface is far smaller, of course. You can flick up and down to sort through songs, and even change the order of the menu by holding the screen down for a second and getting the buttons to jiggle.
An accelerometer is included to enable shake to shuffle, but unlike on other Apple touchscreen devices, changing the orientation will not change the screen perspective because, with this Nano, there is no real “up”. Instead, you can rotate the display by pinching and turning on the multi-touch screen, making the Nano fit your view.
The volume controls on the top have been updated to look like the circular metal buttons found on the new iPhone 4, and we like the software change too. Your volume will now increase or decrease in controlled increments, and you won’t have to deal with the massive bursts of volume that occur on other Apple iPod devices.

A neat gimmick – and one that we love – is the clock display. You can configure the clock face to appear automatically at switch on, and have it permanently display on the screen. Paired with some sort of wrist strap (which will surely appear as an accessory item) and wireless headphones, this Nano will kicks goals with the cool kids.
Radio over the FM band can also be enjoyed through connected headphones, with the new Nano scanning stations and allowing you to choose favourites. Station IDs are picked up, but sadly not saved in favourites. Instead, you’ll be greeted with merely the station frequency. For instance, Sydney’s Triple M comes up as as “104.9 MHz”.
Some radio stations will broadcast not only the station name, but also song names. With those, you can hit a “tag” button in the bottom left-hand corner and save the song information to look up later when you go home and sync with iTunes. It’s an excellent feature that we wish more stations supported. At the very least, the Nano’s feature of being able to pause live radio is something that should appeal to anyone, though the buttons to pause radio and stop it altogether can be a little confusing to remember.
VoiceOver is present, introduced last year as an accessibility function for people who needed the computer to read out what was being selected on the device. We’re not sure if it’s us, but with a touchscreen, VoiceOver feels kind of superfluous. Regardless, Apple has included it and made the controls more complicated. All the standard swipes change and require up and down swipes, double taps, and in general make it more confusing to use a device as easy to control as the new Nano.
Also included is the ability to switch your display from white to black, making it easier to read in certain environments. This feature isn’t really a colour switch, but rather an inversion. When turned on, everything – the menu screen, radio, icons, and even album art – becomes like a film negative. It’s not really “white on black” and can make things a little more confusing.
Battery life is a little bit mixed. Apple quotes “up to 24 hours” on its website, but in our tests the Nano laster between  7 to 12 hours before running out of puff. If you’re listening to music non-stop with very little touchscreen or radio use, you’ll probably get closer to the full day of life from a charge.
Sound-wise, any portable music device is only as good as what you feed it and the cans you connect to it by. Encode your music at the highest bitrate and  plump for an aftermarket set of earbuds (those supplied in the box by Apple are still rubbish) and you’ll enjoy the best the Nano can deliver.

A smaller form factor, nifty clock application and Apple’s excellent music control make the new Nano the Shuffle for people who want more than 2GB of portable pleasure. As a replacement for the traditional click-wheel, the touchscreen  – despite being so small – offers surprising utility, and as a feature from the premium iPod Touch, reminds us that Apple is ever the innovator in this category.
As a re-imagining of the Shuffle and Touch, this Nano is an eminently portable and successful hybrid.
Overall
Features
Value for money
Performance
Design
Reader Rating0 Votes
Great size; Very light; Superb design; Easy to use; Volume increments have been refined to give you more control
Accessibility functions need more work; Battery may run out faster than expected
4.2