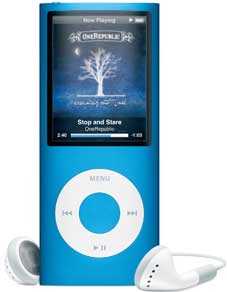 Apple’s fourth take on the iPod Nano returns to the style of the slender second generation model – although improbably it’s even more slim – and adds some neat playback features along the way. If you don’t need the app functionality of the new Touch or iPhone 3G, this is the iPod to buy.

The 4th generation iPod Nano comes in two capacities – 8GB or 16GB – but an astonishing eight different colours, and unlike previous generations, all colours are available for both capacity sizes. In order, they’re silver, gunmetal, purple, blue, green, yellow, orange, red, and pink – a little something for everybody. The core basics of every iPod model are present in the Nano – a simplified interface, scroll wheel, iPod dock connector and the like. What Apple’s added to the fourth generation Nano has, for the most part, been cribbed either from the iPod Touch and iPhone lines, or straight from iTunes 8. From iTunes 8, the Nano picks up the “Genius” playlist feature (although you’ll have to to have it enabled in iTunes 8), which allows you to automatically create playlists based on the data you (and other users) have uploaded to Apple. From the iPod Touch and iPhone, the Nano gains an inbuilt accelerometer, which allows it to perform a number of rather neat tricks. One such trick is to use the accelerometer to enable an instant shuffle feature. Just shake your Nano while a song is playing, and it’ll automatically shuffle to a different song.

Firstly, the screen display is now rotatable, which is essential given that it’s flipped from the 3rd generation widescreen display to a vertical one. It also allows for accelerometer-based games to be played on the Nano. A simple Maze game is supplied, but it’s worth noting that this doesn’t make the Nano compatible with App store games – just ones specifically written for the Nano.

Apple’s also finally got on board the recording bandwagon. While you’ve been able to buy third party add-ons to enable iPod-based recording for years now, the Nano features in-line recording from the headphone socket, although you’ll need a microphone specifically designed with this in mind; Apple’s official versions will set you back a rather steep $109.

Apple rates the Nano 4th generation’s battery life at much the same level as its immediate predecessor, at least in audio terms, with a promise of up to 24 hours audio listening time from a full charge. Video has curiously dropped by an an hour to only four hours, although we’re left wondering how many people would really watch four hours continually on such a tiny screen. We were highly impressed by the Nano 3rd Generation’s durability when we tested it, as it sailed well past the 24 hour audio mark in our tests, and the 4th generation model repeated the trick, managing thirty-odd hours before going flat.

The “shake to shuffle” feature is quite neat, and a great easy way to skip over a track you might not care to listen to right now. We’d like to say that the Genius feature is pure genius, but it’s rather limited at the moment, as if iTunes doesn’t know the track (which usually equates to it not being sold on the iTunes store), or if you’re trying to get any kind of classical genius list going, you’ll be stopped from trying to create a Genius list together. It’s perhaps preferable to what iTunes 8 does in this case, by giving you an error message – but it could still be better.

The fourth generation iPod Nano shows Apple doing what it’s done with the iPod line for a very long time now – tweaking around the edges, rather than reinventing the whole thing each and every time. Given that with the Nano, they had an already pretty good product, that leaves them with something that’s better – but only really by a small margin.