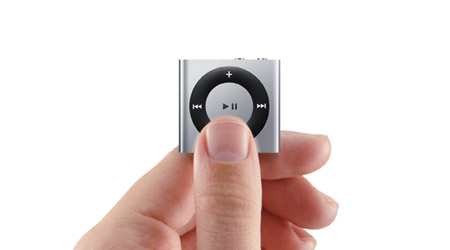 Apple’s tiniest iPod has had the tiniest of upgrades with the addition of new colour choices. It’s still a seriously limited player that we can’t really recommend unless you utterly must have something “iPod branded”.

While the Nano’s had a grab-bag of gadgets added to it, and the iPod Touch got a new processor and capacity upgrade, the main change in the iPod Shuffle is the introduction of new colours. While the third generation Shuffle — the first to feature the USB Flash-drive-like form factor – only came in black and silver – Apple now flogs the Shuffle in five colours. Black and silver remain, but you can also now get a Shuffle in Pink, Blue or Green. If you’re particularly iPod-obsessed – or just want to give Apple a lot of your money – you can also buy a limited edition stainless steel 4GB model, although you’ll pay $139 for the privelege, a $30 price premium.

Do new colours denote these as a new generation of iPod Shuffles? We’re tempted to say not. Other than the colour change, everything that was present in the previous Shuffle can be found here. It’s a simple player that relies on the supplied headphones to control music playback, and even then you can only choose simple shuffling controls for the music on the device. The headphones are the only thing that can control playback, so it’s vital you don’t lose them.

The other feature that’s made the transition from the black and silver third generation models is voiceover. This uses the track information in each file’s ID3 tag to provide a somewhat robotic readout of the current track, which can be handy if you’re unsure of which music you’ve shuffled onto it.

The Shuffle’s a simple player, so setting it up is no great chore. You will need iTunes 9, and As with the most recent generations of iPods, this isn’t bundled in the box, and you’ll have to download it for your PC and Mac before starting. Aside from the optional registration process, your choices with a Shuffle are pretty limited. You can either tell iTunes to fill it with a random music selection, or choose artists or playlists to fill it with up to its capacity. The Shuffle’s the one iPod that doesn’t use a standard iPod Dock connector, which is understandable given its size. Instead you get a 3.5 mm to USB connector for syncing, and again it’d be a really bad idea to lose it, as the Shuffle’s just a chunk of coloured circuits without it.

The mandatory headphones, as with the last generation are an exceptionally bad idea. iPod headphones have never been that great, but if you plug in any other pair, you lose VoiceOver and volume control entirely. Other manufacturers are said to be working on compatible headphones, but even then you’re still going to be stuck with buying headphones just for a single player’s compatibility purposes.

It’s in new colours. If you were excited by the old Shuffle, then the new ones do work and look better, but we’d argue strongly that any cheap no-screen player offers basically the same thing at a better budget point, and if you want an actual iPod, buy something with a screen, like the new Nano or iPod Touch.

This review of Apple’s 3rd Generation iPod Shuffle is of the 4GB version, and the price accompanying this review is for that model. The Touch is also available in a 2GB size, for $79, plus an Apple store only version, 4GB in stainless steel colour, for $139.