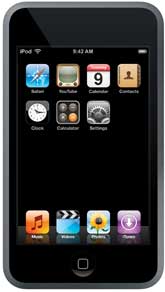 Apple’s finally made a revolutionary change to its iPod line – as long as you discount the iPhone – and the results are mostly good, although the comparative asking price and low battery life do detract strongly from the overall appeal of the iPod Touch.

The iPod Touch features only two buttons – a top mounted button used for quickly switching the screen on and off, and a selector button located beneath the imposing 8.89 cm display. Everything else you’ll do with the iPod Touch is, as the name implies, touch-based – from flicking your finger along the bottom of the screen to unlock it, to typing URLs in to the embedded web browser. It’s actually not that new – the iPod Touch is basically a cut-down version of the iPhone, which at the time of writing was available only in the US, with Europe to follow shortly. For these Antipodean shores, the iPod Touch represents our first opportunity to play in the space that Apple feels the entire iPod line should be moving.

The iPod Touch does music and video playback, as do other iPods, as well as a slew of Touch-specific features, such as the Safari web browser, direct YouTube video playback and access to the iTunes store. All of these functions are handled via the embedded Wi-Fi built into the Touch; you’ll need a nearby open network in order to take advantage of these extra features.

The Touch’s finger-based input strategy is one part inspired, one part annoying. It’s undeniably very cool to use finger-based navigation, and even multi-finger input is supported for certain functions. The downside we found was when doing any data entry; even after quite a bit of practice, we kept hitting the wrong letters on the Touch’s virtual keyboard. Nobody’s ever going to write War and Peace on an iPod Touch, so it’s not a killer flaw, but it can be annoying when you’re trying to enter a URL into the Safari web browser.

The iPod Touch is rated for around 22 hours battery life for music, but we were disappointed to find it lasting less than eight in our tests – primarily, we suspect, because Wi-Fi was enabled while we were testing it out. Given that the wireless configuration is a touch (pun not intended) difficult to disable, it’s a trap we figure many Touch users will fall into from time to time.

The Touch’s video screen makes for an excellent video-viewing platform, although the same caveats about battery life apply even more here. It’s easily the best platform for iPod video, although, annoyingly, once more Apple doesn’t provide video conversion software with the Touch. This means you’ll need to buy additional software to actually put video files or DVDs onto the Touch for playback.

So is the much-hyped Touch worth your money? It really depends on what you want out of it. It’s undeniable that it is, in essence, a cut-down iPhone, and if the extra features (including Bluetooth, and unsurprisingly, telephony) of the iPhone appeal, then you’d be better off waiting – although that could be some time.

It’s a cool gadget and an insight into the future of the iPod line, but at the same time, the asking price of the Touch could score you a couple of iPod Nanos with the same storage but far better battery life, or an iPod Classic with far more storage space. Choice is never a bad thing, and it’s certainly an iPod with new features and oodles of style.