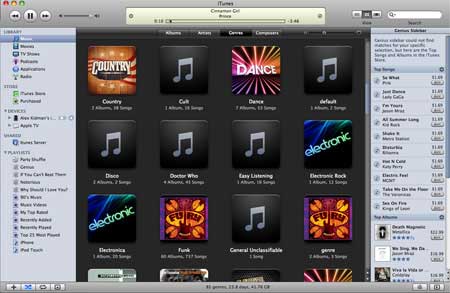 It’s been a long wait in-between full versions of iTunes, and while iTunes 8 doesn’t really offer any truly revolutionary features, it’s still a fine music library manager. Just don’t get sucked into too many purchases from the Genius Sidebar.

Well, for a start, there’s a newer higher definition visualiser, for those who like a little eye candy with their music. On the more strictly functional side, Apple now offers high definition TV downloads… except not in Australia yet. There’s also a new option for viewing albums, “Grid View”, which does almost exactly what it says on the label – presenting your albums in a grid style layout.

The big feature that Apple’s most keen to promote – and one that’ll feature on all the new iPods going forward is the presence of what Apple calls the “Genius” feature. This is split into two sections. Firstly, it’s an opt-in service that lets the details of your iTunes library be uploaded to Apple (but with scant identifying information, as Apple states). Once that’s done, you can create automatic playlists based on what the Genius algorithm determines is compatible music. Select a delicate Romantic Ballad, and you’ll get a playlist of them. Go for some Death Metal, and don’t expect too much Celine Dion, unless the Genius has gone truly nuts.

The other part of the Genius experience comes from the Genius Sidebar. This hooks directly into the iTunes Store, and when you select a given track, it’ll present the top related tracks and albums from the iTunes store, along with a tempting little “Buy” tag next to them. It’s also meant to work with the Genius list you’ve submitted to only present tracks you don’t already have.

The Windows version of iTunes 8 weighs in at 64MB, while Mac users will have to contend with a a 55.9MB download. Once we’d overcome that particular hurdle, installation was no more difficult than agreeing to the usual legal document, as well as authorising the software to perform a Genius scan of our existing library. You can update Genius on a regular basis, or switch it off if you don’t like it.

The new visualiser is pretty eye candy, but you probably already know if you like that sort of thing. Grid view’s a bit more useful, especially if your album cover art is up to scratch.

The Genius features are what Apple sells iTunes 8 on, and we’re somewhat split on their utility. On the one hand, the Genius Sidebar is pretty much just a sales ploy by Apple, and a pretty blatant one at that. We were also struck by how often in our library we’d either get a suggested track we already had, or strike out and just get shown a list of the top iTunes albums and tracks.

Genius playlist creation was likewise a little shaky, and in some instances we were simply told we didn’t have enough similar music to build a playlist. When it does work, it’s relatively clever at matching mood, however, and given it works off communal databases (essentially every iTunes 8 user who opts in), there’s potential for this Genius to get smarter.

Apple hasn’t broken anything significant that people liked about iTunes 8, and while the new features aren’t truly astounding, we figure the handy Grid view and Genius playlists – once Apple gets enough data to start making slightly better suggestions – will make this a must-have application for those seeking to update.