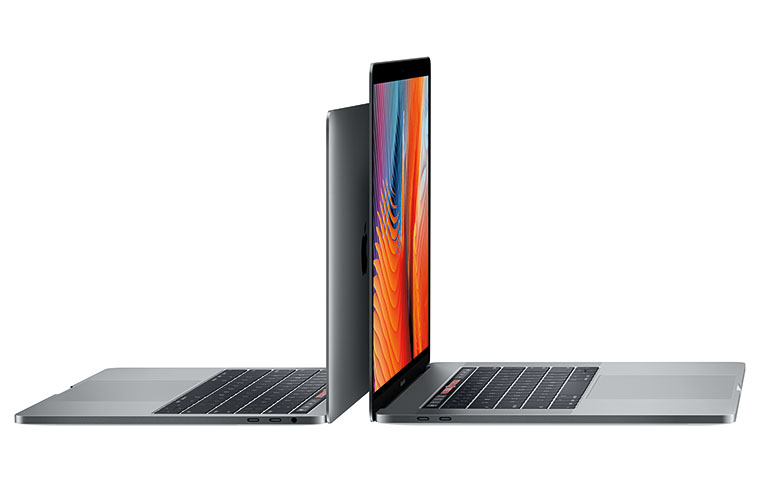 Overnight Apple launched a new line of upgraded MacBook Pro notebook computers, all of them improved in significant, even major, ways.

Technically there are five new models, but the are best grouped into three. Two of them have 13 inch displays, one has a 15 inch display.

I was going to write that the biggest innovation this year was the “Touch Bar” available on two of the models, but then I thought maybe it was the new thinner designs. But perhaps the wholesale shift to USB-C/Thunderbolt 3 ports is it. Or the thinner, higher quality, more efficient Retina displays. Or whatever. Well let’s start with the Touch Bar, because that is a marked and surprising departure from past practice.

The entry level 13 incher has a standard keyboard with the traditional row of function keys (along with a few extras) across the top. The higher level 13 inch and the 15 inch MacBook Pro models have dropped those and replaced them with the Touch Bar. This is a touch sensitive strip running the full width of the keyboard area with an underlying display strip. That means it can display “soft” keys and other indicators to show its function.

So what? Well, its function can be optimised for whatever application  is currently in use.  Doing some audio editing? A slide along the Touch Bar could be the master volume control, while soft keys on either end could select tracks.  Apple seems to have already added support for a number of its own apps:

The Touch Bar places controls right at the user’s fingertips and adapts when using the system or apps like Mail, Finder, Calendar, Numbers, GarageBand, Final Cut Pro X and many more, including third-party apps. For example, the Touch Bar can show Tabs and Favorites in Safari, enable easy access to emoji in Messages, provide a simple way to edit images or scrub through videos in Photos and so much more.

This also incorporates Touch ID, otherwise known as fingerprint recognition, for easy login, a first for the Mac. There’s a new Apple chip, the T1, to guarantee its security.

On the subject of touching your Mac, all models feature significantly larger Force Touch trackpads.

The 13 inch models rely on the inbuilt graphics of their i5 processors (Intel Iris Graphics 540 and 550), while the 15 inch gets a separate Radeon Pro graphics card, with upgrade options available.

What’s all that mean? In addition to their own built in displays, the 13 inch models can also support an external 5120 by 2880 monitor, or two 4096 by 2304 external monitors. The 15 inch model can drive two of the higher resolution displays or four of the “mere” 4K monitors.

Which brings us to connectivity. Yes, all models still have 3.5mm earphone/microphone sockets! And built in speakers with improved bass and “double the dynamic range” (technically, that’s a three decibel increase, but perhaps Apple means something more).

More importantly, the MacBook Pro computers have gone full bore USB Type-C. This shouldn’t be surprising, now that USB Type-C and Thunderbolt 3 and Display Port have merged to the extent that they can all use the USB Type-C socket and plug, with the internal signal automatically switching to the relevant protocol.

The 13 inch model without the Touch Bar has two USB Type-C sockets, while the other 13 inch model and the 15 inch one each have four. Each of these sockets can be used for charging, for expansion to USB 3.1 Gen 2 ports, to Thunderbolt connections to various Thunderbolt peripherals, and connecting to Display Port monitors. Or to HDMI monitors with a suitable adaptor.

No adaptors are included with the computer. Certainly a USB Type-C to USB 3.0 expansion is a must have, if only to allow the use of an external mouse and flash memory sticks. But the move to USB Type-C is great. That’s the future standard for the next five or ten years and we should start seeing soon lots of native USB Type-C peripherals.

All models come with at least 256GB of SSD storage, with 512GB and 1TB options available, and 2TB for the 15 inch models.

And of course all models run the latest version of OS X, Sierra. All models are rated at ten hours running time, whether Web surfing or running video in iTunes.

The basic 13 inch model is available now. The others in “two to three weeks”.

* By “upgradable”, I mean choosing more expensive options at time of purchase. Replacing things later may be problematic.