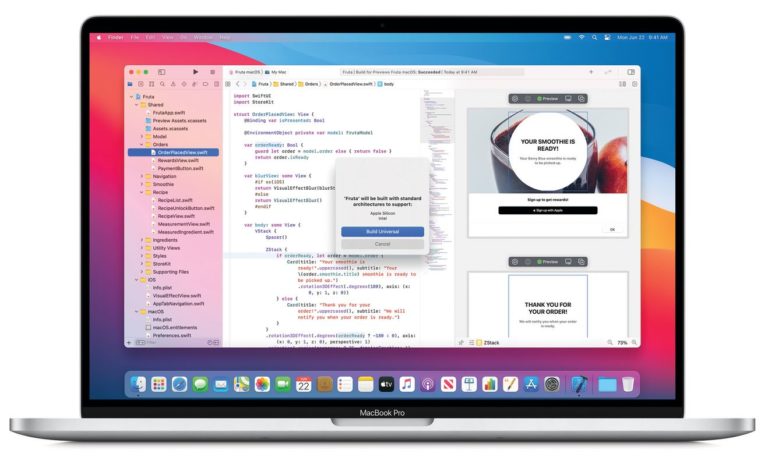 Apple announced that its new Apple Mac line-up would transition from Intel x86 to its A-series ARM-based System-on-a-Chip processors from year-end.

Apple Mac going to iOS is a poorly kept secret. Rumours flying for years that macOS and iOS/iPadOS would merge and create a homogenous product and app line. The move makes sense as the lines between desktop and mobile computing all but disappear.

To achieve the transition, Apple has announced a new Apple Mac OS ‘Big Sur’ that includes technologies to transition to Apple silicon. It promises that developers can easily convert their existing macOS apps and can make their iOS and iPadOS apps available on the Mac without any modifications.

Apple has launched the Universal App Quick Start Program at A$779. Registered Apple Developers must apply to join. It provides access to

What will happen to your old Intel Apple Mac?

Hardware does not last forever – even a well-made Mac. Apple will continue to support macOS and its Intel hardware for some time although it says that this will be a two-year transition. Three-to-five years support for a recent Intel Mac is a safe bet.

Big Sur is similar in concept to Microsoft Universal Windows Platform (UWP) that allows Windows 10 apps to run on x86 and 64-bit ARM processors (as the Apple A-series is). Although in this case, Microsoft has not eschewed x86 for ARM – just included Windows on ARM products in the line-up. Pundits predict that Windows 10 and Android will eventually merge – although increasing interoperability is more likely the next step.

This begs the questions

The press release mentions the use of Rosetta 2 – an emulator that should allow users old MacOS and even Linux apps to run in a virtualised space. Although emulators are not ideal as they use lots of memory and processing power. Apple must be confident that its A-series can provide that.

What is the impact on Intel? GadgetGuy’s opinion.

But if you look at Apple versus all other comer’s OS camps, then iOS (iPhone/iPad/watch) has about 15% and macOS 9%, so combined Apple has 24% – not too shoddy for a single company.

Android has 38% and Windows 36%. Apple’s move tears down the traditional battle lines. Now with one OS and one architecture, it has a solid platform for growth and more importantly, for its highly profitable App Store and services.

Is Intel mortally wounded? No, but it may be the tonic it needs to diversify. More of an issue is whether Intel as a U.S. company can maintain sales of its x86 products to Chinese manufacturers (U.S. Entities List issues) that could also see an increasing swap to Windows on ARM or a new OS like Huawei’s Harmony altogether. Interesting times.

Vale Intel Mac. Welcome, Mac Sur. Now the pundits will be asking what SUR stands for. And we tend to think it is short for Survival.