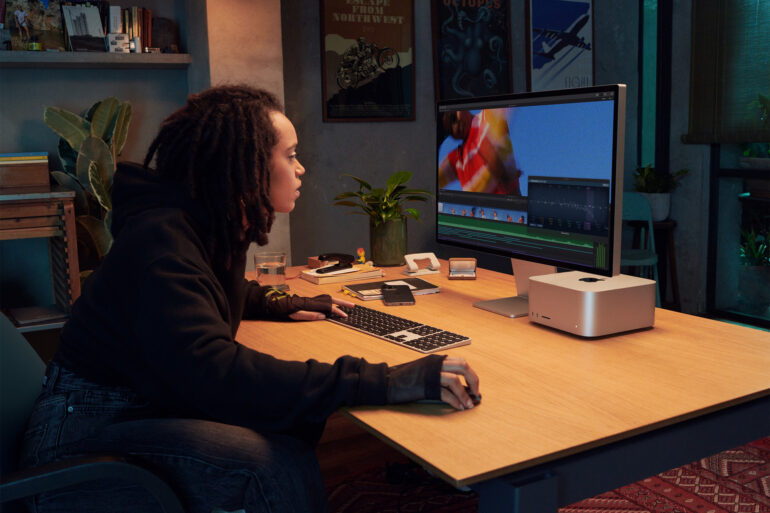 A Mac Mini on steroids, the Apple Mac Studio desktop packs Apple’s new M1 Ultra chip to deliver the most powerful Mac ever.

Looking like two Mac Minis stacked on top of each other, the Mac Studio comes with a choice of the M1 Max or new M1 Ultra chip (rather than the rumoured M2 chip). The M1 Ultra is basically two M1 Max chips working in unison, courtesy of Apple’s “UltraFusion” interconnection technology.

As a result, the M1 Ultra chip features a 20-core CPU and 64-core GPU, with 114 billion transistors – more than 7-times that of the M1. It also features a 32-core Neural Engine and supports up to 128 GB of unified memory.

While the M2 chip didn’t make an appearance, rumours of a new monitor did pan out as the Studio Display was unveiled at the Apple Peek Performance event.

The Studio Display sports a 27-inch 5K Retina screen, along with a 13MP front-facing camera, which brings the iPad’s Center Stage capabilities to Mac for the first time. The display is powered by the A13 Bionic chip.

At the rear, the Studio Display features three USB-C ports and a single Thunderbolt port for Mac connectivity and charging.

The news comes as Apple discontinues the 27-inch iMac, leaving the 24-inch ‌iMac‌ as the only all-in-one desktop computer offered by Apple.

The Studio Display starts at $2,499 with standard glass, or $2,999 with nano-textured glass which reduces reflectivity.

The Mac Studio and Studio Display are available on pre-order today (in stores from March 18).