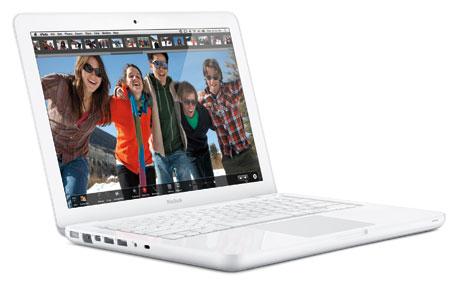 Apple’s Macbook becomes a bit cheaper and a bit more stylish, but it’s also a less feature rich notebook than any of the Macbook Pro lines. At the asking price however, it’s still a great notebook choice.

The entry level Macbook line languished a bit this year when Apple shifted focus onto its Macbook Pro lines, introducing 13″ Pro models. The older white plastic body looked very ordinary next to a unibody aluminium Macbook Pro, and to make matters worse, it was fairly poor value, with older internals, graphics solutions and battery technology at a price point perilously close to the much better 13″ Macbook Pro.

That’s pretty much what Apple’s had to work with to revive the Macbook line, and to the company’s credit, it’s done a fairly good job. The white plastic body is still here to stay – Apple clearly wants the Macbook to be the cheap looking model – but it’s in the same unibody style as the Pro lines, making for a more aesthetically pleasant and less chunky look.

Apple’s now completely standardised on non-removable batteries for all of its product lines, as the Macbook now ships with a fixed battery. That’s potentially bad news if you’re a traveller who likes carrying around a spare charged battery for even more working time, although the upside is that Apple claims the battery sealed within the Macbook will last for “up to” 7 hours of working time, according to Apple.

The other compromises in the line include no Firewire or SD card reader – you’ll have to plump up an extra $300 for the 13″ Pro for those features – and a single 3.5 mm socket for both audio in and out duties, which will shift most users onto USB headsets, we suspect.

Apple’s also taken the chance to bump up some basic specifications. The Macbook comes with 2.26GHz Intel Core 2 Duo Processor, 2GB of RAM (with up to 4GB supported) and a 256MB NVIDIA GeForce 9400M graphics card. An slot loading superdrive sits on one side (although Blu-Ray remains elusive in any Apple product) with Gigabit ethernet, Mini Displayport and two USB 2.0 sockets on the other side.

The Macbook’s intended as an entry-level system, and as such it performs very well. It does take some time to get used to the multi-touch button free trackpad, which clicks in for any left mouse button press, but the learning curve isn’t too steep. Snow Leopard ran well on the Macbook’s mostly modest hardware, and as long as you don’t harbour ambitions to become a multimedia maven, it should serve you well.

The integrated battery is a new trick for the Macbook, and we tested it as brutally as possible, running a full-screen DVD at top brightness with all power saving measures disabled and WiFi left running. We didn’t expect to see seven hours of battery life, but were very happy with the figure of four hours of fullscreen playback. You’re not likely to use it as a dedicated DVD player that much, but the optical drive constantly running is a very good simulation of heavy power draw, and suggests that a full day’s work out of the unit with WiFi running isn’t out of the question.

The updated Macbook brings excellent battery life and otherwise solid performance in a stylish body. It’s not a complete re-imaginging of the Macbook concept, but it does bring the Macbook line more into line with the more expensive Pro models.