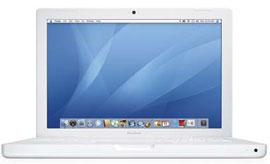 Some months ago Apple shook the technology world by announcing it would abandon the PowerPC processor, manufactured by IBM, in favour of Intel’s next-generation chips. The first recipients of these new processors were Apple’s desktop iMacs, with the high-end PowerBook replacement, the MacBook Pro, not far behind. Apple has finally completed its full transition to the Intel platform in its mobile range with the introduction of the entry-level MacBook, replacing the old iBook.

The new MacBook bares more of a family resemblance to its precursor, the iBook G4, rather than its big brother, the MacBook Pro. It still features the iBook’s trademark curved lines and smooth finish, although following on from the trend set by the iPod, the MacBook is also available in both trademark white as well as black.

There are three models of the MacBook available, and they all share an almost identical feature-set, except for a few key components.

The entry level unit, costing $1749, sports one of Intel’s latest Core Duo processors running at 1.83GHz, backed up by 512MB of DDR RAM and a 60GB hard drive. The next model in the line-up has a faster 2GH Core Duo processor and will set you back $350 more than its little brethren at $2099.

The final model in the MacBook range is also powered by a 2GHz Core Duo processor, but ups the storage quotient to 80GB and will cost you a more hefty $2399. Oh, and it’s black.

Overall design of the notebook is excellent, with Apple paying characteristic attention to detail. For example, the power connector is held in place care of a magnet, so if you trip over the cord, it simply springs free and prevents the notebook from taking a tumble. The lid is also held in place with a magnet instead of a latch, meaning you can easily open the lid with just one hand.

All MacBooks have a 33.7 cm (13.3 inch) widescreen display, with a new glossy coating intended to brighten images and enhance colours. This it certainly does, and it delivers a considerably more vivacious image than the more matte-finished MacBook Pro screen. The trade-off is that reflections are more noticeable, which will make the MacBook’s screen a little harder to read in bright or outdoor conditions.

The MacBook certainly doesn’t suffer from any shortage of connectivity options. Built-in you’ll find wireless connectivity care of the AirPort Extreme 802.11g chip, as well as Bluetooth and a Gigabit Ethernet port. There are also two USB 2.0 ports and one FireWire 400 port for peripherals.

The other feature worth noting is the inclusion of Apple’s Front Row software, which enables you to control the notebook with a small included remote control. This is ideal if you use your MacBook as your music station or for paging through a slideshow of your favourite happy snaps.

As with all of Apple’s desktops and mobile computers, the MacBook also comes bundled with the excellent iLife ’06 suite, including iPhoto, iMovie, GarageBand and more. One funky program is iChat, which uses the built-in webcam in the MacBook’s lid to allow you to set up realtime video chat with your friends on the internet.

The Core Duo processor is one of Intel’s latest achievements, and it kicks off the multi-core generation of CPUs. As the name suggests, the Core Duo actually has two processors built into the one chip. This doesn’t necessarily boost the performance of a single application, but it does lead to a smoother computing experience when running multiple programs simultaneously.

It’s also significantly faster than the old PowerPC G4 that powered the iBook. However, there is a provision to this. In transitioning to the Intel processor, Apple was forced to rewrite its OS X operating system for the new chip architecture. As such, all the old applications that previously ran on the PowerPC version of OS X now need to be translated for the Intel chip on the fly.

Apple uses an aptly named piece of software for this task, called Rosetta. Unfortunately, Rosetta’s translation abilities are not without cost, and old PowerPC Mac software suffers a considerable performance hit on the new Intel MacBooks. Apple is heartily encouraging software developers to update their programs so they run on the Intel processor without requiring any translation, and when these updates are released, we can expect significant performance improvements.

Another revolutionary feature of the current generation of Apple notebooks is that they can also run Windows. You can download a free pre-release version of Apple’s Boot Camp software, which allows you to install a copy of Windows XP alongside OS X. You can’t run them simultaneously, you’ll have to reboot the notebook to get into Windows XP, but it does mean you can experience the best of both worlds, and you don’t have to throw out all your existing Windows software if you already own a PC.

There’s no question the MacBook is a slick package. In one bundle you get virtually everything you need, from high-performance care of the dual-core processor, to ubiquitous wireless networking and Apple’s excellent iLife suite.

However, like most of Apple’s products, you pay a premium for the pleasure of owning a MacBook. The entry level 1.83GHz unit, at $1,749, represents the best value for money in the range. Even so, you can purchase a similarly equipped notebook from the likes of Dell or Toshiba for less money, although you won’t get the equivalent of iLife on any PC notebooks.

The $2,099 and black $2,399 models are significantly less value for money, considering the nominal increases in processor speed and hard disk size that you get from them respectively. The black model will undoubtedly have a strong appeal if you’re looking for a unique and stylish Apple offering but don’t want to jump on the white bandwagon, although the $650 premium over the entry-level option makes this a bit of an indulgence.

Overall, the MacBook is an excellent, and surprisingly versatile, package. While a little on the pricey side, it’s certain to deliver a satisfying mobile computing experience.