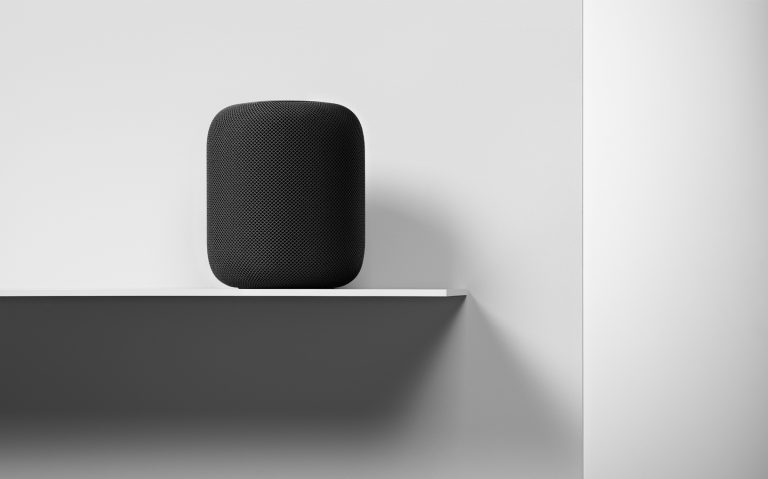 What is an Apple HomePod? It is a ‘smart’ wireless, home speaker with Siri, a virtual voice assistant that will play music as well as other things.

Smart home speakers are the ‘it’ category this year. Both both Apple and Amazon’s Echo speakers arrived down under in February. They join Google’s Home speakers and Google Assistant-powered models from JBL, Sony and others. There is a lot of competition coming in the smart speaker space.

We took Apple’s HomePod for an extended spin to see how it fits into our day-to-day home life. More importantly what it can add to our music listening enjoyment.

What sets the HomePod apart is that it taps into Apple’s Music library, so if you have an Apple Music account, this is currently the only game in town.

After a month of using HomePod at home, as well as Amazon and Google alternatives, it’s clear that Apple has one significant advantage – sound quality.

The HomePod’s small stature is no indication of the impressive sound it produces. HomePod punches well above its weight to fill large spaces with clear, rich and distortion-free sound.

Packed inside are a high excursion woofer, customised amplifier, and seven horn-loaded tweeters, each with a dedicated amp and beam-forming capabilities.

As a result, the sound has ample volume and depth, pin-sharp high-end clarity, deep bass and the sound seems to come from everywhere.

You can choose between black and white models wrapped in a diagonal weave-type pattern that appears modern while neutral enough to blend into most decors.

There is a shiny touch-sensitive area on the top of the unit where a soft multi-coloured light illuminates during interactions with the Siri voice assistant. Plus and minus symbols light up when touched to control the volume levels, mute or wake up Siri.

It leverages the power of Apple’s A8 processor

HomePod performs a vast amount of audio processing behind the scenes. It dynamically adjusts the omnidirectional sound for spatial positioning and the creation of a realistic soundstage.

As such there really is no sweet ‘placement’ spot. It sounds great just about wherever you put it – on a raised bookshelf, in a corner, behind your family photos or out in the open.

Once AirPlay 2 is released later this year it will add;

Apple demonstrated Stereo Mode at its offices. The results were impressive with a wide soundstage and distinct separation between sounds like guitar, cymbals, vocals and drums.

In addition to the complex array of beam-forming tweeters, there are six microphones with advanced signal processing to help Siri hear you, especially when the pod is cranked up to 11.

We were surprised how well our voice could be identified in noisy environments when playing music, while the microwave was on, and the TV in the background. It could even hear me from the living room when it was placed in the kitchen

A trifecta of connectivity

It is not a typcial ‘Bluetooth’ speaker that can be connected to any device. Nor does it have and ‘AUX in’ USB or 3.5mm jack. The only cable connections is the power cable.

HomePod has a trifecta of wireless options – Wi-Fi, Bluetooth and NFC.

Setup is incredibly easy. Turn it on, place your iPhone (or iPad) close by and they automatically detect your new speaker.

It uses your phone’s stored settings to join it to your Wi-Fi network. And that’s it. It really couldn’t be easier.

It took us a little while to figure out where to access the settings menu. You’ll find it in Apple’s HomeKit app – where other home-automation type devices sit.

Use this to designate HomePod to a particular ‘room’. Or you can apply it to a ‘Scene’ which is a way to activate some smart home devices at once, such as setting a ‘party scene’ that dims the lights and plays your favourite house party playlist.

Using Siri and Apple’s HomeKit, you can control your other compatible smart home devices. So, you could ask it to ‘turn the kitchen lights on’.

Apple Music is your primary source of music

HomePod’s primary source of music is your Apple Music account. It can access your profile, so that means your playlists. Apple’s music library has around 45 million songs, so there’s plenty to choose from. However, it is Siri’s ability to help you discover new music that makes the HomePod so much more than just a speaker.

Ask it to play something you’d like, and it will set up a personal radio station.

The most important trick is to keep teaching Siri about your musical tastes, so you can say “I like this song” or “I don’t like this” to update your profile.

You can also ask Siri to play music based on moods, such as “play some wake-up music” or “play some chilled music” for some down-tempo beats.

You can also play music, podcasts, audio-books and soundtracks from other music providers (Spotify, Amazon Music, Google Play). It becomes an AirPlay speaker if an app supports it.

It does not support muiltiple Apple Music accounts

A drawback of HomePod’s Siri-based music control is that it can’t support multiple Apple Music accounts.

You can access playlists from other accounts if they are connected to the same network via Home Sharing.

Too much Brittany played by your daughter, for instance, might teach Siri that you like that sort of thing, and impact your recommendations. While you can switch off your ‘listening history’ preventing changes, this also disables Siri from playing music tuned to your tastes. Asking Siri to “play something I’d like” no longer works.

What would be perfect here is giving Siri the ability to recognise different voices and link these interactions to separate Apple Music accounts and their music taste profiles.

This is something that you can get with ‘Voice Match’ on Google’s Home range of smart speakers, so it’s surprising that Apple does not support this feature. However, it could be something introduced down the track.

As you’ll likely have other iOS devices in your vicinity when you talk to your HomePod, you might expect a cacophony of responses when you say ‘hey Siri’. However, Apple takes care of this and stops your Apple watch, iPhone and iPad from answering, letting your HomePod to the talking. Clever.

Is Siri smart enough? Not at launch

A common criticism levelled at the HomePod at launch is that it’s not as ‘smart’ as Amazon’s Alexa or Google’s Assistant.

But, you can still ask it to tell you the weather, read news headlines via the ABC or Channel7 news, set a timer, translate words, look up facts, get stock quotes and some other things.

The main focus for HomePod is music. Siri on HomePod would probably prefer you ask musical questions like “who’s playing the drums on this track?”, “read me a review of this album” or “create a playlist”.

One of the things that tend to creep people out about this new generation of smart home speakers is that they are always listening for a unique ‘wake-word’. This is ‘Hey Siri’ or ‘Ok Google’ or ‘Alexa’, depending on the speaker.

This voice-trigger record your commands, sends them over the Internet to decipher, and send back a response. This could be some information, playing a song, or starting a timer.

The multi-coloured lights on top of the HomePod indicate that Siri is ‘working’. This inevitably raises the question“Is someone snooping on in on my conversation?”

Hacking a smart speaker is extremely difficult buit not impossble to do. When it comes to privacy, smart speakers should only make recordings after the wake-word triggers them.

With HomePod you can disable the wake word making Siri enabled if you touch the top mute button. Voice data is always anonymised and Apple says it share this with advertisers.

After a good month of the HomePod featuring at home, it has become a regular addition to the daily routine.

The day starts by asking for the weather report. During breakfast, it plays some ‘wake up’ music. A little later, Siri is happy to play some ‘chilled tracks’ followed by a time check.

My wife asks Siri to set a timer, and later in the evening, we play some old favourites.

The best part is the seamless integration with our other iOS devices. It is easy to resume a playlist that was playing in the car or see what sorts of tracks Siri put together based on what I’d like to hear via my iPhone.

Overall, HomePod is a fantastic home speaker for the Apple oriented, and the sound is simply out of this world for the price, and with this alone in mind, you won’t be disappointed.